How The Potato Chip Was Invented - Daniel M. Shapiro 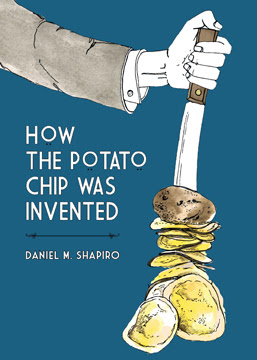 How The Potato Chip Was Invented may be the most fun you'll have inside a book of poetry for some time to come.  These consistently hilarious poems don't hide their deeper meaning - they box with it, dance with it, play with it.

Shapiro is a quick-draw artist and these short prose poems pack a wicked punch as he ransacks everything we thought we knew.


The first thing Archibald will tell you when he
meets you is the John Wayne Story: Archibald
drives his niece to a birthday party—John Wayne's
granddaughter's birthday party—but at first, Ar-
chibald does not know who this girl's grandpa is.
He wants to do a quick drop-off so he can go shop-
ping. And he does. But when he arrives to pick up
his niece, The Duke is there blowing up balloons
for kids to take home. Archibald begins to weep or
giggle uncontrollably. (This is the only part of the
story he varies upon retelling.) Archibald's niece
couldn't care less about some old cancerous SOB
hacking and puffing and spitting into a party favor.
None of the children take a balloon home—but
Archie does. He clutches the steering wheel one-
handed so he won't have to let go of the balloon.
He contemplates showering with the balloon but
worries hot water might spoil it. He places it on
the kitchen table and eats his fruit salad next to
it. One day into this courtship, John Wayne dies.
Archibald watches the daylong film tribute, still
clutching the balloon. He is now certain he pos-
sesses the only remaining breath of John Wayne.
He must research how to preserve this breath, this
form of life that outlasts life. He also wonders what
it would be like to breathe in the breath. Caressing
the balloon for the last time, he drives one-handed
to Winterset, Iowa—birthplace of John Wayne.
Finally, he lets go and watches it climb into the
breeze, where it will leak slowly and painlessly in
a deep sigh.

Shapiro has the enviable talent of turning our culture in on itself, folding it like he was making old time taffy.  His genius is never losing his train of thought, or the reader.  With these poems you are instantly transported into "Shapiro World".  It's disarming because you know all of the characters but in this parallel universe they dance different.

Financial weakness spread Universal: In the 1920s,
the studio laid waste to a ghostly lot of Lon Chaney
films because it needed the silver. The thousand
faces burned into celluloid flickered a last time in
cooler light. Smiths melted the metal amorphous,
twisted in a made-up ghoul's grin. Pristine gang-
sters vanished, along with unnamable monsters
distinctly human. Tales of aging moviegoers recall
only the flakes of storylines, the glints of imagery.

The silver could be anywhere now, maybe sitting
in a permanent dungeon but perhaps in a ring on
display at the jewelry store around the corner. The
woman who buys it might find herself making an
obscure, fluid gesture, a hand movement she can't
explain that takes the place of words.

These funny, fierce poems fascinate and fuel the reader.  Shapiro's strange logic builds on itself and the reader is drawn into a world where game shows and game show hosts mix with dead Presidents and obscure actors, Shapiro throws our celebrity game show culture into a mixer and pours out intoxicating cocktails that get the reader drunk.

Both men would've been in suits and ties, with
Elvis smiling awkwardly, reluctant to give Nix-
on a Bureau of Illegal Surveillance Monitoring
badge. The Colonel, that proto-Cheney svengali,
was absent, handling the business in Cuba and
Chile, but this time, the King had the Red But-
ton at the ready, largest rhinestone on the big belt
buckle. After the photo op, Nixon would return
to Yorba Linda, extend a reel-to-reel tape across
the entrance of a school for a ribbon-cutting cer-
emony, warn children about the dangers of tat-
tling. Back at the White House, two-year-old
Lisa Marie would beam in front of the Christmas
tree, under which first lady Priscilla had placed an
oversized dollhouse, a replica of a Memphis one
the girl would never know.

My response to these poems is a giddy enthusiasm of the highest order.  Daniel M. Shapiro has one of the sharpest tongues in town.

Daniel M. Shapiro is a schoolteacher who lives in Pittsburgh.  He is the author of three poetry chapbooks and a collection of collaborations with Jessy Randall.


www.sunnysideout.com/cloudy
Posted by Today's book of poetry at 7:54 AM