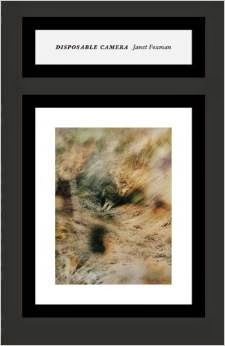 How is such a thing possible?  Think of an architect who builds bridges of impeccable tension, all taut wires and sleek design, but underneath, enormous ballast, foundations of concrete holding solid to the earth.

A woman is telling her husband the sun
looks like diamonds where it
touches the water.
Like thousands of diamonds—
and she begins to count them—

One of those days, in other words,
when looking at water feels peaceful.

Cupolas. Empty porches and gazebos.
Shuttered windows toward the sea; or in the arched
windows of houses near the tabernacle — NO TRESPASSING.
Beauty nobody gets to have when they're
not here, but that is theirs.

Above the sea
a bird heaves itself
toward the dark.

Crossing the sound,
such envy of birds
from my bench on the boat.

Somehow Freeman has taken an American pulse and free of any political or patriotic platitudes, has shown us a slice of the undercarriage.  This doesn't put Freeman in the muck, this is a sophisticated voice acting as a camera obscura.

Stylistically Disposable Camera is as varied as the views, Foxman handles the varied terrain with aplomb.

Light are on
inside house.
People holding remote controls or phones.
You can just see the midsections

of the people, the houses seem
so flat.
A smear of white limos and ugly flowers—
meant to tease the virginity out

of somebody—eclipses
the entrance lobby
of the Holiday Inn.
Against a wall

between trees.
Inside, the regulars
are asking girls if they could
please squeeze

their titties and would they
like some fine black bone?
Far away, the 6:14 crosses the aqueduct
toward a compounding quiet.

The air inside the train
is dark and ceremonious,
as if the night had been inlaid
with otter teeth or carved

from whale bone.
There is a woman by whose porcine legs
you can tell she used
to be a dancer.

No longer do they look
capable of kicking
up cumbrous
puffy skirts.

"The Orchestra" is one of several excellent List poems in Disposable Camera — and as we all know by now — Today's book of poetry is a sucker for a good List poem.  This is a good List poem, not necessarily a typical one.

The Orchestra
for my father

The orchestra is a place for perverts—
also for a pimp (the personal manager),
a Peeping Tom, two bigamists, a pusher
who deals Ecstasy after practice.

The people in the orchestra like
to fuck each other:
in a corner in the pit
a cot for the piccolo and third clarinet,
herpes from the bassoonist to the cellists
then to the tympanist and some violinists, &c.

Complaints from the audience
a bassist is looking down, during concerts,
women's shirts.

At the rehearsal for Ravel's Bolero—
Berrruuummp berrruuump berrruuump bump bump—
Toscanini, who'd with his stick
poke his concertmaster in the eye, says:

It was magnificent but could you
make a small change.

The snare drummer
tries, wants to
please his conductor.
Toscanini stops him again—

the guy's hands shake so much,
his tempo starts
to fall apart.
Toscanini rages,

wants five minutes
later, to fire the guy.
The thing is, it was almost perfect
the first time.

A Musician on Conducting
(Mozart Symphony #40 in G Minor)

In the bathroom door
a trick lock:
Heifetz wanted to put them
in their place
early: sent them
to wash their hands
before the first lesson.

The Concertmaster Decides to Play the Violin

In the crib trying to compose
The Best Song: his first
memory.

Carries it to the alley and smashes it: his first
violin.

A lady in the orchestra had a cello
with a dark and thuddy sound.
A luthier remade it masterfully,
gave it the tone of the Italian
golden period—a miracle.

But a wasted miracle:
to restore the thud right away
the lady restrung it.

The look, in the hallway mirror,
of the violin under your ear!
The animals your hand resembled there!
The spiders! The delicate birds!

A conductor and a violist are standing in the middle of the road:
which one do you run over first and why?
The conductor—business before pleasure.

The Concertmaster Decides to Leave the Orchestra

They are playing Carmina Burana.
so earthy, so infectious,
things in it to put anybody in paradise.
He looks into the audience:
only four people smiling.

Nothing much happened but sometimes
people fell out of their chairs playing,
dropped their instruments on stage.
Or strings unwound during concerti.
Once during the Pathetique
somebody in the audience died.

When we played beautifully
sometimes they got quiet.

Remember how I played sometimes—
when I had them in my hand:
no coughing.

When the music was beautiful,
the walls, the hall itself hardly holds together.
You're not sure the roof
won't come off.

The light that turns buildings gold
is pouring in.

Why are they clapping?
they thought it was
sad and beautiful?


The old Wurlitzer was removed to a roller rink. Every Thursday night an
organist plays wartime music there. Like magnificent birds, chains of men
in velour holding each other at the waist and three women, who were young
when the songs were new, and came here separately, appear untroubled as
they fly, and innocent.

Disposable Camera is playful and surprising, cleverly developed and rewardingly spontaneous.  This is a powerful opening salvo in what promises to be an inspiring and eventful poetic career.

ABOUT THE AUTHOR
Janet Foxman is a freelance writer and editor, as well as a senior production editor at a publishing house.  She lives in Brooklyn, New York.

BLURBS
Chicago Maroon
“In Disposable Camera, Foxman offers her memories to the reader as a shared collective—as objects and experiences that evoke the breathless impact of their own recollection. Her hyper-detailed narratives—each presented in an airy, dreamlike voice, with unmistakable underlying unity—are objectively beautiful and soothing to read. Each poem also allows for the reader to retrieve her own, highly personal, collection of memories. Like digging through a time capsule you buried in your backyard, or an afternoon spent flipping through old scrapbooks, there is no telling what memories Foxman’s selection of poetry will unearth.”
Grace Cavalieri | Washington Independent Review of Books
“Disposable Camera is a perfect summation title for poetry—each poem a snapshot made permanent—a moment in time or thought. But more, these are intricate thoughts that go through the body and turn onto the page as wry, crisp, original incarnations.”
Stephen Yenser
“The flashes from Janet Foxman’s Disposable Camera illuminate verbal events in which the drive to make it new collides with the need to make it clear. All cameras are finally disposable; Foxman’s has yielded images that are not.”
Frank Bidart
“Janet Foxman’s Disposable Camera is a brilliant book of great freshness and great originality. It is an exhilarating book, one that keeps the reader off balance about its ambitions and procedures.”
Kenneth Fields
“The poems in Disposable Camera are about the interrelationships among the arts, often music, and memory, and twinship. Artists who use disposable cameras set themselves against an ever-increasing concern for scientific precision, working instead on the go, trusting a complex intuition based on technical skills that are nearly transparent. In the title poem, Janet Foxman “[confines] the paradise / where my sister lives” in a disposable camera, a variety of images she keeps undeveloped, an astonishing intellectual gesture at the heart of an elegiac book.”
www.press.uchicago.edu