Letter Composed During a Lull in the Fighting - Kevin Powers (Little, Brown and Company)

Today's book of poetry is breaking one of its' own self-imposed golden rules.  I did not get this book from the publisher.  I bought it in a store.

Surprisingly, getting over 700 books of poetry in the mail over the last year has only encouraged me to purchase more poetry from my local store.

Which brings us to Kevin Powers' Letter Composed During a Lull in the Fighting.  Poorly read as I am I wasn't aware of Powers's acclaimed novel The Yellow Birds.  I'll certainly find it now.

For this reader Letter Composed During a Lull in the Fighting is simply the best book of poetry I have read this year.

Letter Composed During a
Lull in the Fighting

I tell her I love her like not killing
or ten minutes of sleep
beneath the low rooftop wall
on which my rifle rests.

I tell her in a letter that will stink,
when she opens it,
of bolt oil and burned powder
and the things it says.

I tell her how Private Bartle says, offhand,
that war is just us
making little pieces of metal
pass through each other.

Powers talks about everything under the sun that you've ever wanted to know, one way or another.

And he is precise with such beauty and hope that I didn't want this book to end.

I've never been on the business end of a gun and hope to end my days that way.  For those who have been to those dark places and returned, think of Kanina Dawson's extraordinary Masham Means Evening, many suffer the horrors of post-traumatic stress, and a few find a way of translating that experience into truths uncloaked by a voice so authoritative and clear that we must listen.

Did I say that this is the best book of poetry I have read in a long time...

We are born to be makers of crude tools.
And our speech is full of cruel
signifiers: you, me, them, us. I
am sure we not survive.

No. I am certain that the
pine trees that ring this lake in Virginia
are occasional, that I sit between them
at the water's edge,

cast two stones against
each other and rest.
For we go down
through these
terrible hours
together.

Kevin Powers rattled my cage with Letter Composed During a Lull in the Fighting.  Perhaps this sort of crystal driven honesty and power only comes when one has been tempered on forge as dramatic as war.  Kurt Vonnegut and Slaughterhouse Five came out of the blast-furnace of Dresden.

Getting over my head and out of my depth.

These poems, narrative in style, have all the properties I admire in good poems — and so much else to aspire to.  Read this book.

Kollwitz was right. Death is an etching.
I remember the white Opel being
pulled through the traffic circle on the back of a wrecker,
the woman in the driver's seat
so brutalized by bullets it was hard to tell her sex.
Her left arm waved unceremoniously
in the stifling heat and I retched,
the hand seemingly saying, I will see
you there. We heard a rumor that a child
was riding in the car with her, had slipped
to the floorboard, but had been killed as well.
The truth has no space mercy, see. It is this chisel
in the woodblock. It is this black wisp
above the music of a twice-rung bell.

I have never spent better money than I did buying this book.  Thankfully I still have a neighbourhood bookstore, Books on Beechwood,  that carries poetry.  Powers writes about a lot more than his war experience in Letter Composed During a Lull in the Fighting.  I can't wait to read whatever he writes next. 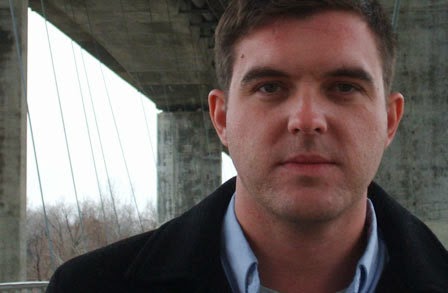 ABOUT THE AUTHOR
Kevin Powers is the author of the novel The Yellow Birds, which was a National Book Award finalist, a PEN/Hemingway Award winner, and a Guardian First Book Award winner.  Powers was born and raised in Richmond, Virginia, graduated from Virginia Commonwealth University, and holds an MFA from the University of Texas at Austin, where he was a Michener Fellow in Poetry.  He served in the U.S. army in 2004 and 2005 in Iraq, where he was deployed as machine gunner in Mosul and Tal Afar. This is his first collection of poetry.

A conversation with Kevin Powers