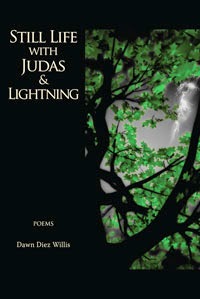 Dawn Diez Willis is a funny gal.  These clean, sparse poems are dense, as in solid.  Willis gains the readers' confidence with relative ease as these poems are easily approachable.  They read like a Joyce Carol Oates novel (Joyce Carol Oates is the bomb), clear, precise yet there is always an element of uncertainty to the acknowledged wisdom of the world.

Still Life with Judas & Lightning comes with a price.  In the world, and in the world these poems inhabit, there is always a cost, a balancing of the scales.

Billy on the Train

At every stop, Billy jumps down and runs
to the same car.  Inside, he touches a long box.

His hands rest flat against it.
The train's whistling makes people

restless and melancholy for miles
as the train moves again, not in the imperceptible

way of the earth, but lurching and rocking
its way toward speed, toward destination.

The train moves and he finds the loss
behind the skin has reasons.

The moon outlives us.  This is one.
At every stop the boy checks his cargo:

You alright, Mom?
His lips cold against the lid.

He can hear the train's life, see the passing miles.
The train travels so much faster than the earth

and the boy loves to go fast, the way
everything rushes hard to get behind you.

Willis has surprising authority and astonishing insight, her poems are peppered with characters who are coming to knowledge.  Willis masterfully catches people in that moment of transition between idea and understanding.  It's very effective.

Hagar & the Blue Jay at the Buena Vista Apartments

The baby first comes to her
as a dream of a blue jay streaming light.
It is a warning about blessing and nature.

Two bodies twine like purple clematis
and the bargain grows. The couple settles,
agrees without smiles, feels the linkage
of the soul and gristle.

Soon, the woman holds the newborn swaddled in cotton.
Everything is changed. There is no going back.
The jay on the yellowed apartment lawn
pecks the thoughtless insects
and eyes her somehow.

Though love is sometimes in her throat like a swallowed dime,
there is something she wants and cannot name.
She will always want it now.
Her glass ashtray fills with the gray powder
of trying to know what some other life could be
if she had not lain down
like a little corpse of joy in the birdsong.

When I was young and at the Peterborough Exhibition, this would have been in the early to mid 1960's, I saw a car purported to be the one where Bonnie & Clyde met their bullety end.  I doubt it was the real car (as I assume every exhibition owner in the country had a rifle, an old car and some chicken blood), but it was sensational to a child just the same.

Willis breaks through that same wall of suspended disbelief with this charming poem:

Bonnie in the Woods

Maybe it's the trees, silent and ready,,
driving them to it with whispers
as Bonnie teeters on Clyde's narrow
shoulders like a child riding
her daddy to anywhere.
Her knees grip, hold her steady,
and she tilts her chin, lets the sky
try to eat her up with its greedy blue.

Something is pushing them forward.
Something hovers in the woods
along single, stretching roads
and it doesn't know a fugitive
from a decent, upstanding citizen,
will house them both in spruce.
kill either with cold given half a chance.

Something craves the span
of her ankles dangling there,
has an uncomfortable itch
to snap their bones
like the necks of warm birds.

Face to the sky, she can't be sure
that later bullets will pierce her
as if sewing her with sunlight,
those blurry yellow threads undone.
She can't be positive her Clyde
will burst with red patterns in the woods.
dance among the quivering trees
until the bullets are finished
and unstring him too.
There is a sick love in the bullets,
unearthly and long.

Clyde puts her down to the ground
and she lies with him on his offered jacket.
This moment is passing.
She kisses between his light-pierced eyes,
her romance man, her one true.
When their lips meet, time stops
in his hot, quiet tracks, still as a person
with hands in the air.

She can hear some narrator etching them
into the permanence of words.
She can hear the voice taking it down,
telling the rumours about love
and its rued perfumes.

Maybe it's the trees, silent and ready.
Or maybe the sun, teetering
in its own stillness as her body
floats up to meet Clyde's,
a cloud blown loose
from its bright blue backing.

"Where isn't beauty hidden?" asks Willis in the second last poem of the this collection.  This could be the central theme of Still Life with Judas & Lightning.  Dawn Diez Willis champions beauty and reason with articulate compassion and a tongue carefully searching for cheek. 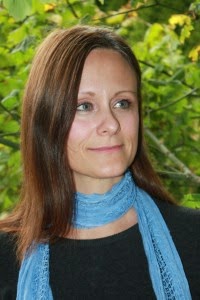 ABOUT THE AUTHOR
Dawn Diez Willis holds an MFA from the University of Oregon, and her poetry has appeared in many journals, including Southern Poetry Review, ZYZZYVA, The Iowa Review, and Dogwood. An Oregon literary Arts Fellow, she teaches poetry residencies through Salem Art Association and is the editor of the OSPOA’s Trooper News. The recipient of an Oregon Literary Fellowship, she was a co-founder of an arts journal for incarcerated youth, Through Our Eyes. She lives in Salem, Oregon, with her husband and two children.

BLURBS
"Dawn Diez Willis's Still Life with Judas & Lightning is a quietly startling book and a strong debut.  In poem after poem, we are confronted with characters in moments of spiritual agon—a contest between the manifestation of a good in themselves and their admission of an in-dwelling potential for small yet damaging evils as well.  Some are saints, more are sinners, but most are the kinds of commoners we live among—those who go about their lives without notice, often barely cognizant of the drama of these struggles within themselves.  In their vividness of scene, their stark presentations of characters stripped down to their souls, these poems put me in mind of Ai's Cruelty, yet Willis' book might better be called Mercy for the counterpoint of compassion that radiates in every line she writes. Her characters are daedal birds swerving under judgement from a secular gad, pinioned in forgiveness from a sacred one."
—Garrett Hongo, author of Coral Road

"The social vision of these poems is broad and empathetic—but also precise. The intensity of Diez Willis's gaze gives Still Life with Judas & Lightning a disarming immediacy."
—Dorianne Laux, author of The Book of Men

"A smile is a scattering of gulls and palm trees cut the sky with silhouettes. These are just a few of the many images in Dawn Diez Willis's Still Life with Judas & Lightning that will literally steal your breath. You'll find here the seething distance of an observer give way to cherished truths, more revealing than an confession. Here are the utterances that make the knowable an intimate encounter with the unknowable."
—Major Jackson, author of Holding Company