The ISABELLA GARDNER POETRY AWARD for 2013 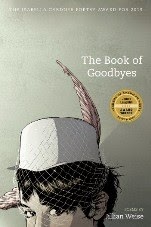 I apologize to Jillian if that offends her, and to all you women if it offends you as well.  I assure you it is not meant to offend.  I have four sisters, all tough broads, at least, and our mother was the toughest broad who ever strode the planet.

All that to say that The Book of Goodbyes packs a melodious punch.

I've Been Waiting All Night

I reckon you were asleep with your girl
before the phone rang. Make something up.

I've been waiting all night to tell you
about the couple in post-War France,

the woman fresh in her grave
and the man who didn't like his mistress dead,

no sir, and so exhumed her, to the dismay
of his wife, who had him arrested

for the stink he made.
She was reburied, returned to the dead.

After jail, he dug her up to fuck again.
Attached suction cups and crafted

a wig from a broom. You can go now.
I'm more in the mood than you're used to.

Weise won the Isabella Gardner Poetry Award for 2013 and that's a good thing.  Books this fine should be celebrated, feted.

Weise has a splendid dark sense of humour.

Check out this line:  "The dead walk into poems all the time, no one complains".

Or you could simply read Weise's "Intermission", a three poem suite, a Finch pastoral in elegant metaphor, and when I say Finch I mean Bird.

The last time I saw Big Logos he was walking
to the Quantum Physics Store to buy magnets.
He told me his intentions. He was wearing

a jumpsuit with frayed cuffs. I thought the cuffs
got that way from him rubbing them against
his lips but he said they got that way

Big Logos bought the magnets and a crane
delivered them to his house. After he built
the 900-megahertz superconductor. I couldn't go

to his house anymore because I have all kinds
of metal in my body. I think if you love someone,
you shouldn't do that, build something like that,

on purpose, right in front of them.

I had more fun in the pages of Jillian Weise's The Book of Goodbyes than I have most days.

Weise is charmingly biting, serenely savage, and she never, ever, takes off the gloves.  I like that.

This lady throws one hell of a punch.

Poem For His Girl

I'll tell you which panties
look good on you

psychedelic plaid
with ruffles on the waist

what's his name again?
Those would look good on you

those too, those also
I could see you

wearing those in his truck
out past the Esso station

to the field party
that one time

you got drunk
and fucked around

with some of his friends
and he cracked 6 beers

and felt old and drove
to the cemetery

and pissed on yr father's grave
here he comes round

the corner—
Are you writing about her?

I hope you're not
writing about her

If we went shopping
I mean today dammit

you could ask why
I'm sleeping with him

then push me
into the hangers

I'm not supposed
to try you on anymore

The dead walk into poems
all the time 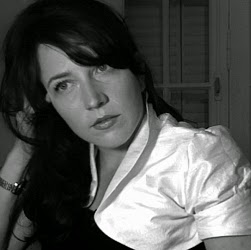 ABOUT THE AUTHOR
Jillian Weise is the author of The Book of Goodbyes (BOA Editions, 2013), The Amputee’s Guide to Sex (Soft Skull Press, 2007) and The Colony (Counterpoint/Soft Skull Press, 2010). Her poem “Incision” was selected for Poetry Everywhere, the short film series produced by PBS and the Poetry Foundation. Her work has appeared in A Public Space, The Atlantic, The New York Times, Tin House and the anthology Beauty is a Verb: The New Poetry of Disability. Ms. Weise studied at Florida State University, the University of North Carolina at Greensboro and the University of Cincinnati. She traveled to Tierra del Fuego, Argentina on a Fulbright Fellowship, and spent two years as a fellow at the Fine Arts Work Center in Provincetown. She teaches at Clemson and co-directs the Annual Clemson Literary Festival.

BLURBS
"In a world where subway cars are filled with passengers staring at tiny screens, where to like something you click something, we are lucky to have Jillian Weise's new book of poems to take to bed, to take on the bus, to sneak into our pacified English Lit curriculum. The Book of Goodbyes is a narrative, lyric, modern mash-up of our experience on earth."
—Matthew Dickman, author of All-American Poem and Mayakovsky's Reader

"The Book of Goodbyes is in effect a Book of Eternal Returns. The poems lead us through our minute daily-life distractions with a matter-of-fact candor that expands the dimensions of intimacy available to us. Ultimately, the Goodbye itself is the muse here—to leave a thing, an idea, a person, a way of life that limits your own being—and to sing for the process of leaving. Weise helps us understand that when we say goodbye, we leave something in the past as much as in the future—this book is a beautiful lesson in how to do exactly that, and in how the humbleness of doing so is in fact heroic."
—Harmony Holiday, author of Negro League Baseball

Jillian Weise
Talk about "The Colony", her new novel, in this video from
Faculty Research
from
Clemson University's
Department of English