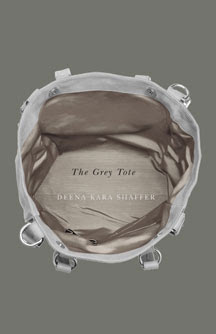 Deena Kara Shaffer sure makes a sad but excellent debut.  The Grey Tote is a season of illness, death and mourning as the poet comes to terms with her parents dying, first her father, followed shortly by her mother.

Shaffer elegantly calls these poems a "lesson in goodbye".

These poems work very well in their grim territory, they work with considerable and fierce tenderness.  But the poems are never coy, never a whine, there are no exposed tears, you feel rather than see the seismic shifts and internal thunder that drives Shaffer in these poems.

The heavy fret
of how long.
Living now
with view only
to life later.
Wishing daily
for more days
to wish for.
(More with which
to wish for more.)
Now has always
an eye on later--
keeping watch
over what never
isn't on its way.

Shaffer's The Grey Tote is a no-holds barred look straight down that double-barreled shotgun that is aiming at us all.

These poems have no 'fuss' to them at all, they are as direct as a black suit and tie and with purpose.

She needed the endline,
the terminal verdict.
Hopelessness renewed her
hope, made her funny.

In knowing it wouldn't be
long, she sought harder to thrive.
Held both the soon of ending
and faith in remiss.

Scans injected
momentum. Paralysis made her
hungry. Her cancer wasn't catchable,
but boy, her belief in wellness was.

These are poems for "the left-over people" so that perhaps they won't feel so alone.

Eventually we all make some of the same journeys Shaffer treks in The Grey Tote, now we have her book to remind us that we are not alone.  This book is an attempt to make the unbearable bearable even if it is just by making it a familiar.

Are they dormant,
choked by the drips,
handed over
with the death
certificates?

Can language
resurrect,
even though
they won't?

The only ones
I hear are
the early condolences
from the once
heroic surgeon.


ABOUT THE AUTHOR
Deena Kara Shaffer's poetry has appeared in many magazines including The Dalhousie Review, FreeFall, Canadian Voices: Volume 2. The Grey Tote was short-listed for the Marina Nemat Award. Currently a Learning Specialist at Ryerson University, Shaffer lives in Toronto.

BLURBS
"The Grey Tote is impressive for its attitude and language–its direct expression of fear, its realization of mortality in the technological labyrinth. The style is direct, spare, hard, clear, but with elegance and significant whimsy."

"Addressed to the dead and the living, the elegiac yet urgent poems in Deena Shaffer's debut collection use wordplay to better understate grief and longing. They keep asking: how do we transcend death? How can we live in this radiant world and not be diminished? The answer: celebrate as you mourn."
-Jan Conn

Poems cited here are assumed to be under copyright by the poet and/or publisher.  They are shown here for publicity and review purposes.  For any other kind of re-use of these poems, please contact the listed publishers for permission.
Posted by Today's book of poetry at 7:52 AM