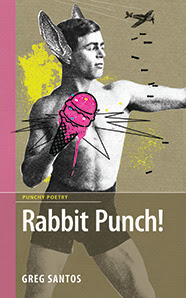 Greg Santos is one skilled cat.  You might think he is a sprinter at first, these poems race by so fast with their jet-speed alacrity.

You could also make a good argument that Santos could be a stand-up comic of a particular type of brilliance -- throwing out poems so quick, so deft, so off-the-cuff, that they could easily be mistaken for one-liners but in fact, this a feast of punch lines.

Punches coming at you so fast and furious you'll be punch-drunk in no time.

That feeling the executioner has
when he hangs up his mask at the end of the work day,
I have that right now.
Like a rabbit punch out of the blue.
I feel on kilter and that worries me.
But I'm not complaining.
I'm just singing a requiem for all decent centaurs
everywhere.
The digital photo frames of the present
do not compare to the daguerreotypes of the past.
Take a bayonet to the face
and you regret it for the rest of your life.
It's best not to dwell.
I say it's better to pack one's bindle
and hobo it down to the freight yard.
That way you won't feel like a permanent intern
and that elephant you've had on your back all your life
will be off scratching its back on a tree in some open field.
Skulking back into the village
long after they've forgotten they tarred and feathered you,
the prodigal son will be welcomed home with loving arms.

Greg Santos is unlikely to kill anyone with Rabbit Punch but the title is apt.  These poems hit a bit like a well timed punch.  You don't necessarily go down - but the boxer/poet certainly wins your undivided attention.

In the summer we caught
frogs while they burped
at the edge of ponds,
their spawn bubbling,
shimmering in the sun.

We were fast,
grabbed them
with bare hands,
squeezed until
they stopped squirming.

Tied string around their bodies
hung them on pine trees,
left them dangling
all through summer and fall,
waiting for winter to come.

In December
wearing boots, heavy jackets,
we trudged through
clean snow
till we reached the pines

where we proudly
showed off our
homemade christmas ornaments:
tiny skeletons,
bones tinkling in the wind.

Today's book of poetry could not give a higher/better recommendation for a book of poetry. Seriously.  Almost every page is gold of the purest kind.

I hope Santos had half as much fun writing Rabbit Punch as the reader gets mining this delicious ore.

Everything Santos writes is true-sounding, his left jab winnows out any chaff, his crisp right cross - always on the button.

It occurs to us here at Today's book of poetry that "This Poem Wants You to Trust it" might in fact be a manifesto.  It certainly is a treat.

This Poem Wants You to Trust it

Not right away but gradually over time.
It wants to hold hands for a while before getting serious.
It is very patient and understanding that way.
It enjoys making mixtapes to help you get through the
work day.
It likes Renaissance fairs, prancing, and enchantment.
It wants to be a guest speaker in your high school gym.
It will come dressed completely covered in glitter.
It will shake itself like a dog and sprinkle its wonderment
all over the audience.
It will charm the pants off the crowd.
Some of them will even consider becoming poems
themselves when they grow up.
That's just how this poem rolls.
It encourages you to follow the rainbow.
It is the leprechaun of poems.
No, actually it is more like the unicorn of poems.
This poem can only be read
By the pure of heart,
by you.

Truer words never hissed out from between a boxer's bruised lips.

You, the reader, better be in good shape, Greg Santos' Rabbit Punch is not fooling around.

ABOUT THE AUTHOR
Greg Santos is the author of The Emperor's Sofa (DC Books). He holds an MFA in Creative Writing from The New School in Manhattan. Greg is a poetry editor for carte blanche and teaches the art of verse to at-risk youth. He lives in Montreal with his wife and two children.

BLURBS
“Rabbit Punch! breaks the neck of poetry and stuffs it in a bag and trudges with it through the forest and spills it out onto the kitchen table, where Tara Reid and John Ashbery dig in. This is a funny, creepy, reverent, irreverent and insolent collection. And likely the only one in the history of literature to mention Tara Reid on the back cover.”
– Stuart Ross

"Greg Santos' poems are so quick on their feet, and fly by so fast, and are so pleasurable, I almost forgot that they are poems. Of course they are, and are as literary as they are entertaining:  New York School by way of Paul Violi. But even tradition deserves a jab or two. Santos packs a whole lot of enchantment in each of his rabbit punches. Getting knocked out has never been such fun.
-David Trinidad

Poems cited here are assumed to be under copyright by the poet and/or publisher.  They are shown here for publicity and review purposes.  For any other kind of re-use of these poems, please contact the listed publishers for permission.
Posted by Today's book of poetry at 6:33 AM