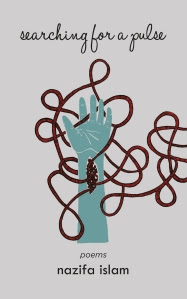 Nobody has the heart to tell Rosemary that she's dead.  Rosemary is in a hellish void where Wheel of Fortune plays non-stop on the television and no one comes to call.

searching for a pulse does not have a happy ending.

Many of the best books don't.

Nazifa Islam's world and work are populated with spectacularly sad people fighting hard to emulate the sorrow of Sylvia Plath.

he had a peg leg too

She married a man with one glass eye
and divorced him the next day but he
still got his green card. She weeps now
while sitting in front of her television
watching Wheel of Fortune every night.
You haven't met her yet, but her name is Rosemary.

This is a first book for both Nazifa Islam and a first book of poems for Whitepoint Press.  Impressive on both counts.

These poems are messy little cries for help wrapped in elegant tissue.  These poems have a music all their own, it is a lulling dirge and it whispers you in.

searching for a pulse is utterly charming in a Morticia Adams/Janice Joplin/Ann Sexton sort of way. There's some dark attraction to those obsessed with the dark attractions.

Nazifa Islam is all over the legacy of Sylvia and her thirst for that oven, that one long sleep.

With no hope in sight that hope will prevail, Islam's characters spiral towards self-determined fates like Sufi dancers spinning towards the light.

he was taught truths

He told Rosemary
she was pretty when
she isn't for a very
long time. Finn isn't
particularly kind he
just actually believed
she was beautiful.
Rosemary used to
roll her eyes at him
but she was secretly
pleased all the same.
He stopped saying
it though after Janet
leaned over one
morning to whisper
I used to think she was
beautiful too but I've
learned better now.

Islam sustains a tone of humerous despair -- and you have to have a dark soul yourself to see the humour in these poems.  Luckily, Today's book of poetry is equipped with just such an entity.  It is hard to sustain the low notes of the human psyche and not tailspin into something too black to read.

Islam escapes that dangerous terrain with just the right slice of cherry twist.

The fourth time Rosemary
tried to die she decided to
do the thing properly. She
wrote goodbye letters to
everyone she loved and
mailed them before slitting
her wrists. As Rosemary
lay in her hospital bed,
restrained and under
sedation, both Alice and
Finn stopped by to burn
their letters in front of her.
They'd decided I love you --
but not quite enough was far
from being adequate. to
this day, Janet sulks about
not getting a letter.

Rosemary is nobody's baby.  In a world where no one can give love it is hard to sustain hope.

These very good poems don't end happy, but I already told you that.

It is the reader that reaps all rewards. 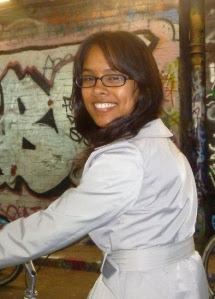 ABOUT THE AUTHOR
Nazifa Islam grew up in Novi, Michigan. She graduated from the University of Michigan with a B.A. in English and has an M.F.A. from Oregon State University. Her poetry and paintings have appeared in a number of publications, including Anomalous Press, From the Depths, A Baker’s Dozen, and Flashquake. While in London during the summer of 2012, she visited not one but two of Sylvia Plath’s houses in Primrose Hill. She can frequently be found banging away at her manual typewriter, regularly updating her blog Thoughts Interjected, and dreaming of one day visiting L.M. Montgomery’s Prince Edward Island.

You can visit Nazifa at her blog:  http://www.nazifaislam.com/