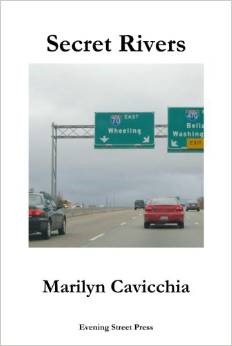 Welcome to Marilyn Cavicchia's Secret Rivers. It's a clever trick, the speaker's are identified by their first names and their vehicles.

Today's book of poetry has long maintained that popular maxim that we are all stars of our own movies.  Cavicchia uses that sensibility masterfully as she pulls a myriad of fully formed voices out of her magic hat.

Poignant and funny, these poems are every traffic jam you've ever been in.

If that balloon truck cuts me off one more time,
I'm going to smash into it. Asshole.
What kind of idiot keeps turning their signal
on and off like that? Yeah, go ahead and
get in the left lane. We all know you're in
a big hurry. You're so much more important
than the rest of us. All I'm trying to do is
get myself home without being killed first.
It's like the whole world has gone crazy,
and no one's locked up anymore.
You never know who's behind the wheel
and what they might do. When I think
of how we used to hitchhike on those
summer days, and nights. I got
through it all and am alive to tell
the story (though I did once have to
jump out into traffic -- every hitcher
has a story like that).

Cavicchia's style finds empathy for every voice she employs.  She recognizes that every single person is somehow both fixated with their own narrative and inexplicably connected to the larger narrative, the bigger story that embodies every voice, every vehicle.

Cavicchia weaves this tapestry of conversation between Hondas and Fords into something we can admire.

It's great no long being
the fat kid on the bus.
I mean, I'm still the fat kid,
but it's not as bad now that
no one kicks my seat, asks
about my man boobs, which,
OK, I know I have, I see
myself, too, in the mirror
(though sometimes I try
not to). I don't know why
Shawna drives me to school.
She's like, three years older
than me, really cool, so, yeah,
I don't know why she'd want
to hang out with me, much less
give me rides to and from,
every single day, even when
I have band practice. She sits
in her car, reading, until I'm
done. She asked my parents
one evening; it was really
business-like, except it was
embarrassing--she told them
some of what had been going
on, bus-wise. My mom looked
like she was the one who had
been punched, spat on, called
faggot, and oh, yeah, asked
about the man boobs. My dad
wanted me to keep riding the
bus, to build character, but I
think I have character enough
already. Shawna and my mom
worked it out--she comes
a few minutes after my dad
leaves for work, and she doesn't
honk her horn or anything like that.
She doesn't have to. I'm always
ready to ride with Shawna. It's like
this was always my seat, and she
was always saving it for me.

Marilyn Cavicchia is in the driver's seat (it had to be said), and the conversation she lets the reader in on is riveting.

It is strangely familiar as well -- we have all been in these cars, had these conversations with ourselves.  Cursed under our breath.

Today's book of poetry felt instantly connected to the very human follies and foibles of these drivers and passengers, they could easily be you or me.

I'm showing apartments
every day now. This one
lady, she keeps calling me
to complain about this
and that. Her flight was
delayed, and now there's
a storm somewhere
between Columbus and
here; she's not used to
driving in snow,
and she doesn't have
any sweaters. Listen,
I'm not going to pick
her up from the airport,
and about the sweaters,
I'm sure they have Google
in South America, where
she's from. She could
have looked up our
weather from there,
especially if she's so
brilliant that they
have to import her
from a whole other
continent. All she is,
is a scheduler. She
schedules the workers.
She must be damn
good at it, is all
I have to say.

ABOUT THE AUTHOR
Secret Rivers is Marilyn Cavicchia’s first published chapbook. Publications in which her work has appeared or is forthcoming include: Graze, Naugatuck River Review, Hawai’i Review, The Sow’s Ear Poetry Review, and THEMA. Marilyn was born in Seattle and moved to a few different places, spending most of her childhood in Ohio. She earned a bachelor’s in English and a master’s in journalism, both from Ohio University. Marilyn now lives in Chicago with her husband, two children, a box turtle, and a fancy goldfish. She is an editor at the American Bar Association and a communications specialist at Chicago Child Care Society.
https://marilyncavicchiaeditorpoet.wordpress.com/

BLURBS
Marilyn Cavicchia gives vivid voices to the drivers and passengers traveling a rainy stretch of freeway in eastern Ohio. She conjures distinctive verbal identities for each of her personae, and each poem’s vignette delights the imagination and the ear. A further joy is to trace the “secret rivers” of relationship among these characters: between the anti-fracking activist and the grandmother looking forward to a check for the drilling rights to her yard; between the divorced father driving a balloon van and the road-ragey driver of the Chrysler behind him; between the energy contractors new to the community and the locals in whom the rapid changes inspire both bewilderment and hope. Cavicchia’s brilliant poems precisely observe the details of life in this city—yet her Ohio freeway represents every motorway in America, where rivers of vehicles propel their occupants toward regret, nostalgia, and inevitable transformation.
—Jennifer Bullis, author of Impossible Lessons
Cavicchia knows that the true soul of any place resides not in its well-trod highways and main streets, but rather down the psychological back roads traversed only by locals, though well known to everyone. Like shorthand Sherwood Anderson, each of these compact poems maps the crossroads of boom and bust, of loyalty and betrayal, of prejudice and unfulfilled dreams that haunt virtually every small American town whose inhabitants are exploited as much by their own well-intentioned fears as any outside interests.
—William P. Tandy, author of Smile, Hon. You’re in Baltimore!
The residents in Secret Rivers navigate a community coming apart at the seams; we’re privy, poem by poem, to the thoughts that worry below the surface of ordinary encounters. With language both spare and intimate, Cavicchia explores isolation, resentment, polite existence, and occasional rivulets of hope, of people facing the inevitable advance by an unnamed company promising big payoff and no risk, in exchange for permission to rive what lies underneath a dying town’s yards and land. “So many decades beyond saving/ that fear begins to look like hope”, we read. These poems remind us to listen, to each other and ourselves.
—Valerie Wallace, author of The Dictators’ Guide to Good Housekeeping