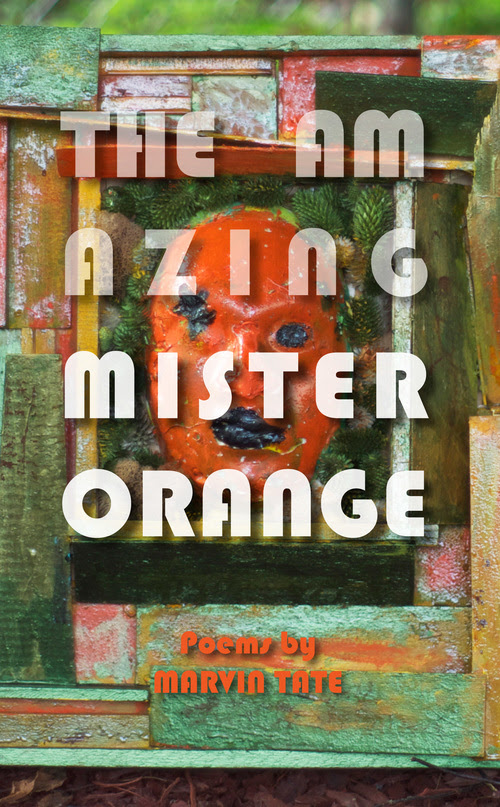 I saw a bird fall from its tree house,
into a bed of debris where it instantly died.
A passerby noticed it too and said, don't take it personal,
death can be like that, unexpected and without reason.
She then continued on with her search through all the havoc
and beauty caused by god

Marvin Tate is my new guru, if I can track him down.

Marvin Tate is a shark in shallow water thrashing his elegant discomfort.

Marvin Tate's The Amazing Mister Orange is so down to earth wise that you don't feel the earth shift beneath your feet until you try to take your next step and realize the landscape has changed.  Subtly.

The majority of your day is spent peeking out
of your bay window at the day runners changing places
with their afternoon replacements. One of them is the son of an old
girl friend, an irregular booty call, that never amounted to anything
and so you're not surprised to see her youngest and oldest slinging
dope in the middle of a school day. You feel hypocritical in your new
role as sporadic community activist, convinced that their type of
entrepreneurialism is worse and more dangerous than yours could
ever be; you make the call, police arrive, a reality-show spectacle
ensues, and three out of the five are caught. You feel good about
your anonymity; reassured that your role as snitch, weed advocate,
and community activist is on point. Tonight you sleep with the
window open. The street you live on is moonlit. The lookouts and
stickups contemplate their losses - Pharoah's "Deaf, Dumb, and Blind,"
the soundtrack to your dreams.

End of the interview for those without an answer.

When reading a book for the blog the first time I write a few notes as a reminder.  The second time through I write down the page numbers of the poems I'd like to include.  With The Amazing Mister Orange the side of my page of notes looks like a calendar listing for a month, the shape of a long ladder.

Today's book of poetry is totally convinced, Marvin Tate is a Monsterpoet.

The Amazing Mister Orange (for Ainsworth)

Mister Orange has a habit of pulling down his pants
in public places like at Bauble Land and at open mic poetry readings,
he calls these public exhibitions, "works in progress." I respect Mister
Orange; he's clairvoyant, with an original sense of humor but has
problems dealing with the present. Once he rescued a calico from
being eaten by a finch, by feeding the bird catnip, while the
frightened cat flew into his arms. Outsiders see our friendship as
superficial and exploitative, solely based on if I have any weed or my
willingness to sit through one of his philosophical tirades about
chakra and chanting the word O-YA! This, he reminds me, relaxes the
soul. From his new deck of tarot cards I've chosen the drunken court
jester. I too wish to be carefree, but first (he insists) I must rid myself
of negativity and self doubt. Music from downstairs is playing, the
singer's name I can't recall. Irked by my lack of concentration he
returns to his makeshift bed of nails and levitates. Never have I met
a brother so irreverent and uninhibited. Tomorrow we'll meet
underneath the viaduct or in the park among the dope dealers and art
fucks. I'll try to impress him with the name of the obscure soul singer
while he burns incense to keep away the many evil spirits.

These stories, these lovely narrative poems, read like a hit-parade of the best stories your friends have yet to tell you.  They are funny, knowing, witty, sharp, remorseless, confident.

We really couldn't ask for more.  This book kicks it.

ABOUT THE AUTHOR
Marvin Tate is a visual artist, author, educator, front man and songwriter. A notorious poet, he has performed widely, including on National Public Radio's This American Life, Def Jam Poetry, The Heartlands in San Francisco, the Chicago Blues Festival and the Eindehoefen Museum in the Netherlands. Tate has also collaborated with longtime multi-instrumentalist and former Wilco member, LeRoy Bach, and singers Tim Kinsella and Angel Olsen for for a collection of songs called Tim Kinsella sings the songs of Marvin Tate with LeRoy Bach and Angel Olsen on Joyful Noise Records (2013).

BLURBS
“Marvin is the funky genius... Marvin is the writer for this age and his poems help us complicate the normal and ponder the obscene. Somewhere between the poem and the wisdom of Job, Tate offers us another way in, but only if you really want to go with him. Marvin made me a soul singer and a better reader and a fan of being myself and bigger than myself. Marvin’s words help us believe.”
—Theaster Gates, Jr., renowned Chicago artist

“Walking a dog, apologizing to a lover, recognizing a kindred soul in the gesture of a stranger—these minor considerations and mundane activities open the reader to complex humorous and empathetic observations craafter with the lyricism of a songwriter and the precision of a minimalist. I was reading Marvin Tate and thinking of him in the lineage of Wanda Coleman and other poets who write their poems on the bus and leave them there for other riders in solidarity and care.”
—Cauleen Smith, filmmaker, Drylongso

Poems cited here are assumed to be under copyright by the poet and/or publisher.  They are shown here for publicity and review purposes.  For any other kind of re-use of these poems, please contact the listed publishers for permission.
Posted by Today's book of poetry at 7:58 AM