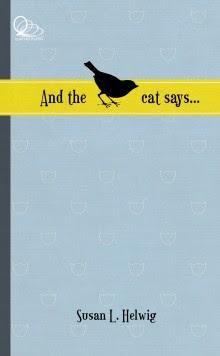 Any of you who truly know Today's book of poetry will know our true feelings about cats, so you can imagine with what trepidation we opened Susan L. Helwig's little marvel And the cat says... .  What we found were poems like "Letter to Philip Roth" and the extemporaneous explanation of the connection between eggplants and love.

And the cat says... is a cornucopia of entertainments.  Helwig has found a comfortable spot with enough humour and pathos to suit her sly needs.  It's like she has them tied together at the waist and and knee and this book is the dazzling three legged sprint.

It was a tomato

What virgin bride in the Old Country
did not thank a tomato
hiding where the hymen used to be
for the groom's prideful groans
and carmine sheets in the morning?

when a mob spews anger
it's tomatoes that shout Revolution!

Tomatoes made the sauce in Little Italy
when young Corleone shot the Chief
no apple caused that amount of trouble, ever.

Why just the other day, dining el fresco
I planned a sensible order, salad, dressing on the side
vegetables in season
when the sun caught the ketchup on someone else's fries

I swear that red stuff winked at me
two shades off ruby.

Today's book of poetry wouldn't call Helwig bawdy, that would be less a compliment than a snide remark.  Helwig isn't bawdy but she is delightfully frank.

My wife has a coterie of amazing female friends called "The Nasty Girls" (apologies to recent news cycles but my wife's friends coined this term for their tribe over a quarter of a century ago), women of sardonic wit and relentless humour and all of it tinged with their many years of life experience wisdom.  Their motto, if they had such a thing, could easily be "no bullshit allowed" and I'm convinced that they would welcome Susan L. Helwig into their fold as one of their own.

Hard to do with a partner
what I've done alone for so long
the breathing, the rhythm
everything throws me
we start, we stop, soft laughter
high-pitched nerves

Underway again
he has a man's love of speed
I was thinking adagio, with no strings
and presto! here we are at the end

Afterwards, neither asks, how was it for you?
knowing full well which bars
were peppered with mistakes
the music doesn't lie
all we can hope is same time next week
another chance to come together.

Our morning read welcomed a couple of guests this morning and as you all know by now - everyone present has to read at the morning go round.  Dexter read a few in his slow and quiet loquacious fashion, then our friend Sara teased some sorrowful music out of one or two and some belly-laughs out of few more.  Our regular staff were inspired by our guests and upped their game.  And the cat says... sounded like the life of the party.

Now that we two love again

The world glows peppermint, rain-washed, new
and we can dally in a house the size of April
without the hurry-up of student sex
the roommate back from class too soon
now Marsalis, not Mingus, warms our tea

Out the window and down the street
the Salvation Army band, its jolly tuba
leads the parade

Later in the garden, grandchildren, yours
will make their shrieks and finds,
the softly tinted Easter eggs I hid last night
adobe cream and evergreen mist
the chocolate bunnies, bittersweet.

No cats were harmed in the production of this blog. 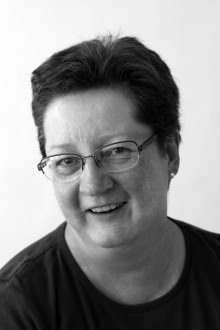 ABOUT THE AUTHOR
Susan L. Helwig grew up on a dairy farm in southwestern Ontario just outside of Neustadt. From 1994 to 2002 she interviewed Canadian and international authors for the radio programme “In Other Words” on CKLN 88.1. Her poems have appeared in many literary journals and anthologies in Canada and abroad, and she has two previous poetry collections: Catch the Sweet (Seraphim Editions, 2001) and Pink Purse Girl (Wolsak and Wynn, 2006).

BLURB
Delicious.  Entertaining.  Susan L. Helwig's And the cat says... (her best collection so far), is so readable it makes poetry seem like a naughty pleasure.
-  David Gilmour