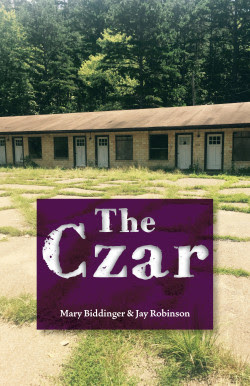 The Czar is an elegantly seamless patchwork quilt, an on-going riff trilling electric about the fate of the modern world and all of us peasants bouncing around in it.

Who is this Czar?  Mary Biddinger and Jay Robinson never say for sure but Today's book of poetry thinks it's a metaphor.

Today's book of poetry would be very curious to know the process used by Biddinger and Robinson, how to meld two poets into one, because The Czar speaks with one clear voice.

The Czar, the character, not the title, is a mitigating dictator.  The Czar is looking over your shoulder as you read this.

To those who can afford underpinnings of quality.

To those who dine on other people's roof-straw.

To those directly responsible for increased surveillance.

To those owls who know but don't consent or tell.

To those whose voting stickers never adhere.

To those princes you dealt with accordingly.

To those who doubt the true innuendos of torture.

To those directly responsible for Miley Cyrus.

To those pollsters you later seduced with mints.

To those who insist every vote should count twice.

To those who dine on salami every day for lunch.

To those faxes we sullied with biological materials.

To those who grow a beard when they shouldn't.

To those undergraduates who dine on each other.

To those walls you climbed -- naked and drunk on icing.

To those who secured the borders of my pants.

To those workers who bodyguard the potholes.

To those who cannot afford free health care.

To those directly responsible for bathing the Czar.

To those directly responsible for the Virgin Afterbirth.

To those peaches, actual peaches, not innuendos.

To those miniskirts I refused to wear in the elevator.

To those owls who occupied Wall Street.

To those directly responsible for your orgasm.

It has been quite some time since Today's book of poetry has come across a book so ripe with list poems and we are delighted to include this one.  The Czar is peppered with them.  Nicely spiced.

"I am not yet ready to be Tsar.  I know nothing of the business of ruling."
-- Nicolas II

True to form, our Czar is flawed, often unprepared.  But in a world of dictators both large and small, real and imagined, it is reassuring to find a fallible fob fop Czar.

Ironically, the Czar was a terrible student of foreign languages.
His parents complained to the principal. He called his OEUVRE
his OUVRIR. He'd spend the rest of his life attempting to open
someone or another. The Czar thought a body of work was for sex
(emphasis mine). His biggest challenge was the pluperfect. One
day he was taking a piss at work and terrified himself with the
prospect of pissing in the same pissoire for the next thirty years.
Not to mention...

The Czar recalled the word for rabbit in French, but asked for a
fish at the small game restaurant. We will not speak of the brief
tutorial regarding Belgian engineering. In Mexico, the Czar
announced himself as an organ thief, and then placed his request
for The Entertainer. He claimed Sister Carrie to be his favorite
Russian novel, the best cure for hangover to be another trip to Las
Vegas. What happens in the Czar's fancy room never stays in the
Czar's fancy room...

Once, as a sophomore in college, the Czar drove to Canada. He
took a wrong turn, ended up in Montreal instead of Windsor. Every
map looks like it's written in the Cyrillic alphabet, he said to his
roommate. But he had a bottle of Wild Irish Rose in a thermos and
one foot out the window. Both of them drunk on freedom for the
better part of a dozen hours. The Czar thought the Cyrillic alpha-
bet a soup he hadn't been served as a boy. His roommate laughed,
got left beside a sagging barn outside Ottawa...

The Czar gets around.  This morning's read of The Czar in our office was a rollicking tic-tac-toe affair. Milo was in top form, he is our head tech.  Kathryn, our Jr. Editor was equally splendid and in fine Czarina form.  The big surprise was Max, our Sr. Editor and former Bolshevik.  He burst out of his office all hammer and sickle eyed and ready to read.  It's always a treat when Max reads, he gets his voice into every corner of the room.

The poems in The Czar have a cumulative affect on the reader and when Max started bouncing them around everything else stopped.  These are wicked smart whippet poems, bounding by with such ease and handsome energy that you hardly notice the power.  Biddinger and Robinson have ample reserves, their Czar has moxie.

wonders if his mistress is taking things
seriously. A little less time as Bjork

the swan, a little more Lady Gaga
in her meat frock. Somewhere the spin

cycle stops spinning. Somebody's ears
pop. But it's another day in this empire.

Czar plans a trip to Paris but forgets
to pack the trip. His mistress suggests

what she calls the Carbonite Method.
It's a fancy name for the Czar's favorite

number, the one only he was allowed
to screen print onto his baseball jersey.

Well, he's the Czar, one parent said. We
never give up, his mistress observed,

but we might go down. She was 12, and he
was a spring training enthusiast. Now

he's a baseball card of bloated stats.
His mother never realized that Duffy's

Tee House was actually a head shop.
She inquired the price of a brilliant red

hookah, wondered where the flowers
were supposed to go, while the Czar

on back (ringer tee, of course, striped
sleeves). Sometimes his mistress still

wears this shirt. It used to be her sole
garment at bedtime. Now she wears it

beneath the first of two lumberjack
flannels, practically undetectable,

much like her attachment to the Czar,
which is all undershirt, zero bra.

The Czar is a modern construct and an intriguing everyman/everywoman, The Czar is a marvelous book.  Mary Biddinger and Jay Robinson have created a thoroughly modern character to live among us.

ABOUT THE AUTHOR
Jay Robinson is the co-author of The Czar. He teaches at Ashland University and The University of Akron. He’s also the Co-Editor-in-Chief/Reviews Editor for Barn Owl Review and helps edit The Akron Series in Contemporary Poetics. Poetry and prose has appeared in 32 Poems, The Laurel Review, Poetry, Whiskey Island, among others. The Czar, forthcoming in August 2016, is his first book.

BLURBS
As a child, my mother taught me to zigzag Z to avoid getting eaten by an alligator. Mary Biddinger and Jay Robinson employ this technique here: in the clever curve of C around the subject, in the sharp switchback tack of Z for zealous. They commit to wordplay revolution, erasing origins, replacing narrative with wit, sound, and imagery so surprising it feels, by poem’s end, perfectly natural: the thing that waited, haunting, in the swamp. I don’t know how else to explain The Czar, whose unexpected becomes so expectant with meaning. This is a brilliant collection/collaboration.
- Carol Guess, author of Doll Studies: Forensics

This exquisite, feature-length project is the comic jam. But it's no joke. You can thank Mary Biddinger and Jay Robinson later. For now, arm yourself with a few questions: What rules does this Czar follow? Which ones does he break? And just how many ways can you fold a Czar in the first place? Are you ready? The Czar demands your participation. Enter the parlor!
- Matthew Guenette, author of American Busboy

This book is not a book, it’s treatise on empire, a manifest destiny, a pack of wild peasants outside the gate, a mesmerizing tour d’effluvia in its Czar not Czar, throne not throne, overthrown mistresses, Lady Czar is no Czarina, cappuccino foam isn’t foam, revolution was a hoax, naming and renaming, unlearned cursive, unheard flute solo, empire under construction, not New York, not Sacramento, non-tabloids, non-violent non-women. Biddinger and Robinson rebuild our world and take it away piece by piece to show the conviviality of our destruction.
- Elizabeth J. Colen, author of What Weaponry