The Brief Reincarnation of a Girl - Sue Goyette (Gaspereau Press) It's not false modesty to claim that Today's book of poetry sometimes feels that our skill set is not sufficiently broad to do justice to some of the great books that come our way.  Today's book, The Brief Reincarnation of a Girl by the sublimely talented Sue Goyette, is a case in point.

We've been down the Sue Goyette poetry road before at Today's book of poetry.  You might remember we marvelled at Goyette's first book The True Names of Birds (Brick, 1998/2008) and then gushed about Ocean (Gaspereau Press, 2013) because it impressed the bejesus out of us.  You can see both of those here:

In The Brief Reincarnation of a Girl Goyette has suspended the exactness of events to reveal a new kind of truth, one that can only be achieved through poetry.

The girl refused to be afraid when she climbed
on high things. Her mother shaved the legs of the furniture
and, along with some cough syrup, stewed it
with a few of the girl's father's beer caps. The girl spit
a whole parade's worth of bicycle bells back at her
and pranced around in her diaper. The mother sat in the closet,
lit a candle, and located the doctor with binoculars.
The doctor, appearing in a bathrobe, urged
the mother to slap the girl with her slippers then take her
pulse. The girl had begun to growl which was upsetting
the cats. The mother upped the dosage of bottle caps
and added some baby Aspirin. The doctor suggested
more conventional medication, the girl sounded bipolar
and should be on a leash. What they didn't know
was that the girl had collected enough stickers
to reward the universe. She had a blanket and a bear.
She had resolved that when she got up from the floor
that last time, she'd be in another time zone
with better tasting furniture and a door that closed.

The mother sat in the closet and trained her binoculars
on the doctor's prescription pad. They were trying their hand
at automatic writing. The doctor wrote Chevrolet
and hubcaps. The mother wrote she's driving me crazy.
The doctor discussed the dosage and they both agreed,
given the century and the 24-hour drugstore, they could treat themselves
to a chocolate bar and maybe a slurpee. The mother wondered
if there was a pill for the minutes before the girl's father
got home. Are the minutes filled with knives or cement?
the doctor wanted to know. Sometimes knives and sometimes
cigarette burns. If the bath was filled, the doctor wanted
to know, would the water be hot or cold? The mother
complained that she didn't have time for a bath because her daughter
often would stand on her dresser and pronounce that she was
a burglar. Was she armed? the doctor wanted to know.
The doctor reminded the mother to put a colander against
her daughter's chest and strain her heartbeats. The mother
wondered if she was qualified to own a colander. They laughed
when they both wrote down parenting with a sad face.
The doctor urged the mother to draw happy faces instead. A whole
page of them and then to swallow four of them a day.
Maybe, the mother said jovially, one day, the father and the girl
just wouldn't come home.

Sue Goyette gives us ample warning, the first words we see in The Brief Reincarnation of a Girl after the title page is this prophetic line from E. M. Forster.

Goyette then proceeds to introduce us to the "counter-logical" poem.  Sixty-one of them, untitled and unfettered by logic.

At first the reader is a little kilter-stepped by Goyette's template, you don't necessarily catch the ride on the first wave.  But of course you continue because once you get your feet wet the tide and the undertow pull you from below to reveal the wonder in these waves.

The narrative in The Brief Reincarnation of a Girl is one sad canter down some pretty desperate streets.  Poverty and neglect play starring roles, ignorance plays along, it is one blue, blue ballet.

Poverty was taunting the girl's father's fire. Did he want
a training bra, poverty asked and the father sizzled
in his seat. Order, the judge yelled. Did he want
some panties? The father slumped and the fire
in his crotch flared. Order, the judge yelled and the father
sat up, trying to hide the fire from the judge who had already
warned him about open flames in his courtroom. Poverty
gobbled up the father's shame for its salt. The lawyer
asked the doctor if the girl had exhibited other behaviour
that warranted increasing her dosage from a single pill
to an entire orchestra complete with the several trumpets
she had been given to drown out her own loudness.
She suffered anxiety, the doctor told the jury, as well as rage
and low self-esteem. Objection, the courtroom yelled,
to which the lawyers objected and the judge pounded
on the doctor's prescription pad for order and then called
a recess so he could take a piss and look out at the parking
lot from his office. Often, he'd been described as being
a little Zen.

The reader, almost by osmosis, intuitively follows Goyette and her counter-logical discourse all through this complex life and death drama of a young girl let down by all.  Parents, doctors, lawyers, the well intentioned and the rest of us could not prevent the ghosting of this girl.

Sometimes there is no safety net at all and people are left to plunge into an abyss that only promises a hard end.

Today's book of poetry was touched by the narrative of these poems, it is sad moving stuff.  At the same time we can't help but express our poetry fix joy at the workings of this poet.  Sue Goyette writes with such intelligent confidence that the reader always wants more.  The Brief Reincarnation of a Girl has all the elements of tragedy but Today's book of poetry can't read Goyette without feeling hope.

The bear carried the ghost of the girl tenderly
in her teeth and ran until walls and verdict were replaced
by trees. She stood the ghost of the girl by the river.
She kept slipping so the bear moved her to a sapling and leaned her
into it. She waited to see if the ghost would slip again
but she stayed upright, squinting at the sun. What is that?
she wanted to know. That's your sister, the bear told her gently.
I drew her wrong, the ghost dismayed. The bear shook her head,
you were close, she said, then concentrated on the task
she'd set out to do. She threw the first fish back.
Too slow, the bear explained. The sapling was carbonating
the story it was giving the ghost with tender leaves that rose
in the telling like bubbles, bursting their green into that place
where her ears would be if the ghost of the girl had ears.
The bear was patient having grown old in the winters she'd spent
with the girl and her reach was slow. The girl had often groomed
the bear and gave her words to speak, then would sing the bear
more words that were lozenges of honey the bear would gulp.
Between them, there wasn't a moment they weren't famished.

The bear knew the second before she caught it
that she'd found the right one. She readied herself
for the feel of it, how it might overwhelm her
but once she held the fish it was more
like a homecoming than anything. The bear reveled
in the pure moment of it, its clamour for life.
It felt like this, she told the ghost of the girl
before placing the fish in the pan where the girl's heart
had been. The fish enchanted them by swimming
in protest. The girl glided back into her voice
long enough to say oh. Oh. Love trusted the bear to pick the fish
from the pan then and return it to its river. It would be easy
and proper to say, at this point, that several seasons later,
the tree surprised the bear by flowering; its fruit a succulence
that chimed with her loss a new kind of nourishment.

Today's book of poetry is convinced that Sue Goyette is simply one of our very best poets.

Today's book of poetry has to say it one more time, Gaspereau Press and those masters Gary Dunfield and Andrew Steeves continue to make the most attractive books of poetry on the planet.  This one is a stunner. 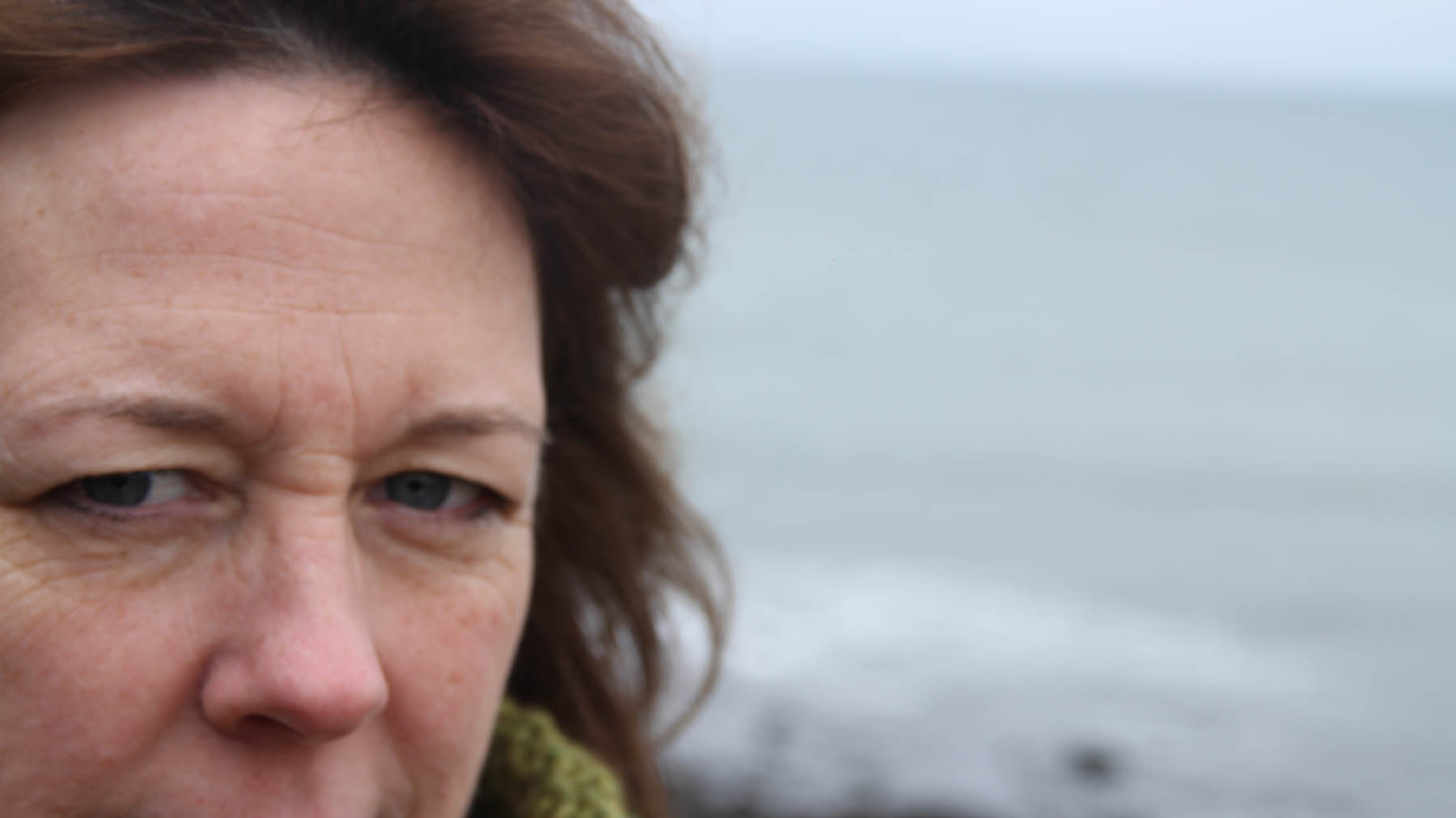 ABOUT THE AUTHOR
Sue Goyette has published four collections of poetry, The True Names of Birds, Undone, Outskirts, and Ocean, which was a finalist for the 2014 Griffin Poetry Prize. She also published a novel, Lures, in 2002. She has won the Pat Lowther Memorial Award, the Atlantic Poetry Prize, the CBC Literary Prize for Poetry, the Earle Birney Prize and the Bliss Carman Award. Goyette lives in Halifax where she teaches creative writing at Dalhousie University.