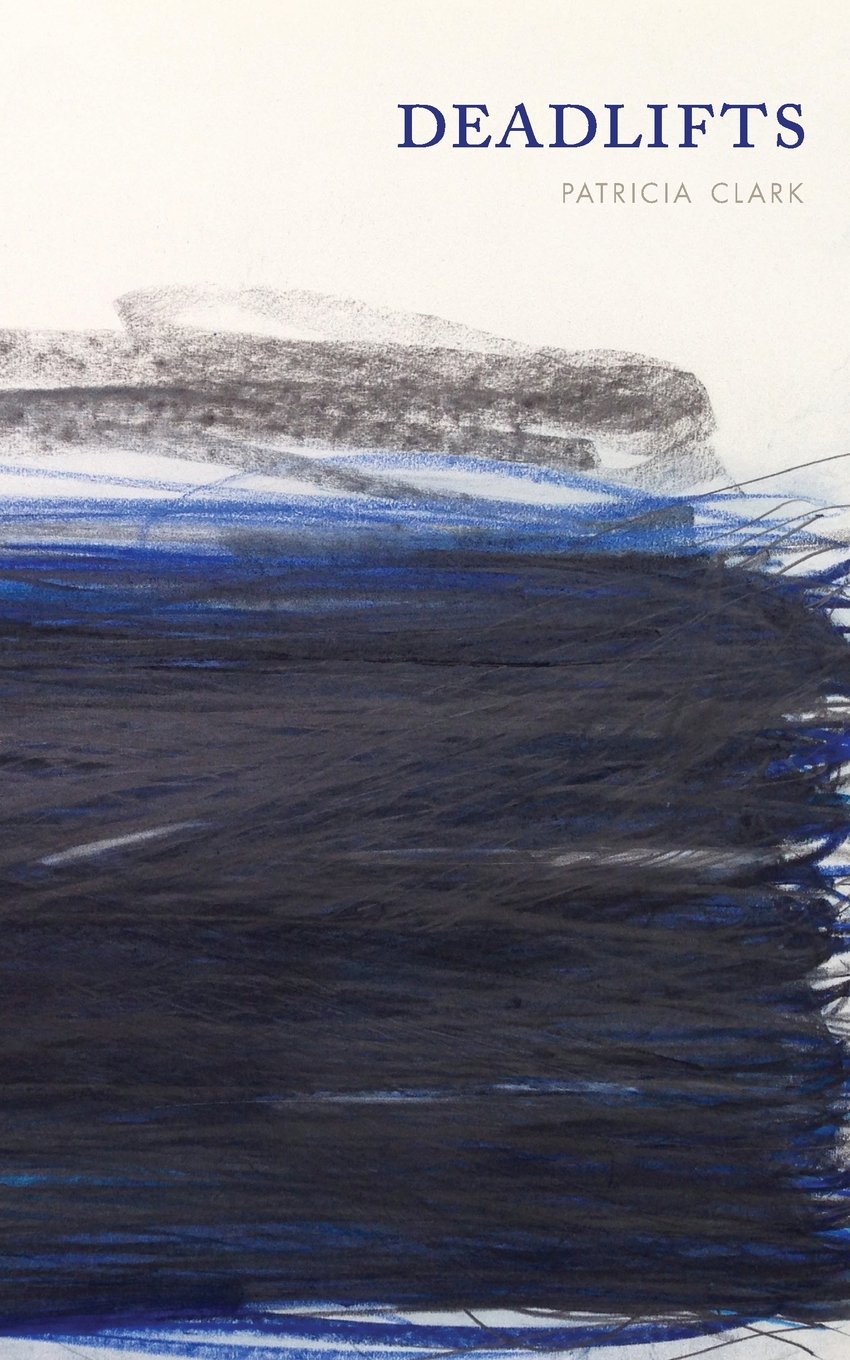 Deadlifts is an oddly beautiful and quirky invention all its own.  Today's book of poetry has never seen the like.  Patricia Clark has taken on the macabre task, a sullen and spectacular rite of passage.  Clark has created the strangest and yet sweetest tapestry imaginable.  In order to write Deadlifts Clark trolled the dying in America searching for other women named "Patricia Clark."  Then she has taken the liberty of writing a poem about these women, their lives, their deaths.

We have all wondered about those other people walking around, our strange dopplegangers, name-sakes.  Patricia Clark has brought hers together just to listen to what they might have to say.  It is fascinating.

They are dying all over America,
Patricia Clarks, one after another—

in Vine Grove, Kentucky, but also this town
of Grand Rapids, Michigan. How rude

for a friend to say. "I saw your
name in the obituaries. A shock

for a moment, thinking you gone."
Then we resumed working out,

picking up handles of bright
stretchy bands, the long iron

body bars, and then heavy
weights to do deadlifts.

Remarkably enough Today's book of poetry went to high school, back in the early70's, with another Patricia Clark although we always called her Patti.  She is now a retired mother and extremely successful independent business person, she lives in the mountains somewhere in northern California.  And most thankfully does not yet merit inclusion.

The older we get the more often we think about our dark future and that monster named Death who sits waiting for us.  Deadlifts visits that old bastard repeatedly and with aplomb.  There is no fear here.

Assemblage of a Life

We are all the same, these lives
bracketed by dates,

these lists—who preceded us, who
remains. Childhood in the Bronx,
one sister, two brothers.

First grade photo with a pleated skirt,
and outside with a new puppy.
Easter egg hunt in a pink
sweater.
Family around a Christmas tree
with silver strands,
stars on the top.

Forgive me if I imagine wrong.

Story within a story—second husband the love
of your life, Lawrence.

Your jobs and work, travel
around the world.

You were known, always, as Pat.
I hear someone call your name
and turn.

Deadlifts proves, without trying, that we are all the same beast, our variences infinetly smaller and less significant than our simularities.  It just took a Patrica Clark to tell us so.

Our Lady of Victory Church

Out of a gingko leaf, a scrap of river birch bark,
out of a morning that sparkles, icicle drip and sun,

out of details that call to you the way peepers
will start chorusing in Lamberton Creek, soon,

"we're here, we're alive," so the few obit
paragraphs tell so many lives, ones worth

knowing—except it's too late. And isn't it time
for you, too, to reflect? Mrs. Clark of Hyannis Port,

no maiden name, no mention of where you began.
Living near the water, you recently persuaded friends

to donate sails to be recycled for sustenance fishermen
in Haiti. Only sixty years old at the time of your death.

Wherever we end, the date, or time, let's listen up
and get to work! Sail on, bright boats through

Caribbean waters—pull in a fish, unhooking the lure
from a red snapper's lip—and let smoke rise from coals,

later, enjoying the flavors of a glorious final feast.
You're the one to whom we'll lift a glass.

Coldest May in fifty years.  It feels like November.  A cold November at that.  But we are all still here and that is a good thing.  Deadlifts reminds us to enjoy what we have because all of it is temporary.  We are all on our way to becoming one of the Patricia Clarks.  That makes Deadlifts one compelling book of poetry.

At least one Patricia Clark can burn Baby burn.

ABOUT THE AUTHOR
Patricia Clark is the author of five volumes of poetry, including most recently The Canopy (2017) and Sunday Rising (2013). She has also published three chapbooks: Wreath for the Red Admiral and Given the Trees; a new one, Deadlifts, is just coming out from New Michigan Press. Her work has been featured on Poetry Daily and Verse Daily, and has appeared in The Atlantic, Gettysburg Review, Poetry, Slate, and Stand. She was a scholar at the Bread Loaf Writers Conference and has completed residencies at The MacDowell Colony, the Virginia Center for the Creative Arts, the Tyrone Guthrie Center (in County Monaghan (Ireland), and the Ragdale Colony. Awards for her work include a Creative Artist Grant in Michigan, the Mississippi Review Prize, the Gwendolyn Brooks Prize, and co-winner of the Lucille Medwick Prize from the Poetry Society of America. From 2005-2007 she was honored to serve as the poet laureate of Grand Rapids, Michigan. She is Poet-in-Residence and Professor in the Department of Writing at Grand Valley State University in Michigan.

BLURBS
"What a brilliant concept: Deadlifts offers witty, lyrical verses, historically accurate and imaginative, in which poet Patricia Clark provides an insider's view of other "Patricia Clarks"—the dead ones. These poems are even more brilliant than the concept, their endings a surprise and a good shock. Heartening and perfectly tuned, like Arcade Fire or Stephen Colbert's monologues, these poems are what we need now—and will return to—for a long time to come."

"In Patricia Clark's Deadlifts, we cling to the speaker as she dives right into mortality's maw, poring over obituaries of those who share her name. They're strangers, yes, but the connection Clark makes is powerful. Are we anything in death beyond our names? As Clark says, 'We are all the same, these lives/ bracketed by dates,/ these lists—who/ preceded us, who remains.'"
—Glenn Shaheen

"These poems are masterful—the way Clark tucks reverberating sounds from one line to the next—pain, thanks, face—like she tucks her namesakes into their graves. So gently and with so much love. Through the breath and ink of this author Patricia Clark, the Patricia Clarks that have gone on come back again."
—Nicole Walker