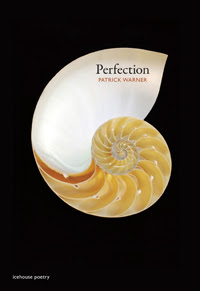 it began when I hit the snooze and slept in late,
got worse when I perched on the edge of the bed
and in one fluid motion attempted to pull
my still fastened shirt down over my head.

It was that kind of morning, a broken button
I had once thought neat as a crescent moon
lodged with force on the bridge of my nose
and cut into my flesh, a sickle. Blood trickled,

dripped from my nose to my lip to my lap,
thereby waking a sleeper cell
in the form of a newly cut key which the guy
at the key shop hadn't properly sanded.

In no time at all it turned into a breadknife,
quietly sawing a hole in my pocket,
unbeknownst to me until the moment I reached
for the gas pump and felt the spill

of coins down my leg. One lodged in my shoe.
while several more scattered out in the slush
where they seemed to refresh themselves,
turned silvery in the pavement's salted wet.

Like sparrows around a heated bird bath
those coins seemed—if I can say such a thing—
to be enjoying themselves, seemed to be saying
that every cloud has a nickel-alloy lining.

They said ignore the fact that bad things
always happen in threes. Look up, they said,
and there above the park I saw a falcate moon,
and felt again the pull of mysterious forces,

the magnetic coming together of pieces
in a meaningful way—Professor,
let me explain: it's where the rule of three
meets Murphy's law, it's the moment when

the number of things the average mind can recall
is exceeded by one, but the spirit drawing
on unstable power—not Strong-Cobb units of forces,
but Olivia Newton Joules of laughter—

invents an on-the-spot order. And so it was
I took in the grin of that cracked -Aspirin moon
aligned above the bust of Winston Churchill,
an unusual bust sawn off at the nipples,

and placed on a chest-high plinth in the
eponymous park in such a way
that it looks as though he has stepped behind
that polished granite block to take a piss,

his bulldog scowl revealing not only is
bloody-mindedness but perhaps a waxing trouble
with his flow, much like that pump clocking
five cents at a time in the early morning ten below.

Patrick Warner eases through the misery of the mundane we all endure as humans.  Sure, pathos and those other Mousekateers show up, but these tongues are looking for cheek.  Perfection is a hearty breath of grit.

"Do you want to be right or be happy?"
she asked. "That's too simple," I said,
"it doesn't need to be one or the other.
I feel happy when I'm right and right
when I'm happy. They can go together."

This was the pattern to be broken,
the second nature that usurped our natures,
but only if we admitted the problem:
that was fifty percent of the cure, the rest
would come from time in her care.

She told us we each had the power to choose
not to let others take over our lives,
then she covered herself by means of disclosure:
"I myself was something of a perfectionist.
I myself was the great smoother-over."

This was the pattern to be broken,
the second nature that usurped our natures,
but only if we admitted the problem.
She showed us the root and solution.
I squirmed in my seat, a retrograde symptom.

"Imagine you're old," she said, "at sixty-five.
What then will you think about having been angry
for the best years of your children's lives?"
I nodded my head while plotting murder,
"I'll do anything," I said, "to help my daughter."

Warner doesn't make it easy for the reader.  This is romp amok poetry.  There is no line Warner won't jump into, onto, over and out.  Warner is riffing redolent and with a roue's regard.  This is fun, articulate stuff.

Patrick Warner's "Valentine's Day" poem is the best take on chocolates and hearts since Tom Waits plowed that field blue.

These poems prod like a finger poked in the chest of the reader.  Warner likes to play but he is a pragmatic grump and he never lets play get in the way of a harder lesson.

The vole's pink foot clattering through dark
sends decibels binging off the owl's disc face
to root in her tufted ears.

Her oscillating head's a radar beam
covering three quarters of the pie.

There's nothing there but disturbed air.

Another poem for the great philosopher
who will eat three thousand in a season.

Leave behind a grey-brown pellet,
a fur and bone scroll for school kids.

These poems worked for me.  Warner's poems are rooted to an oral tradition that splashes words against the rocks of reason just to watch the rainbow in the mist and spray.

ABOUT THE AUTHOR
Patrick Warner is the author of three collections of poetry: All Manner of Misunderstanding; There, there, and Mole.  His work has appeared in numerous magazines and journals, and he has twice won the E.J. Pratt Poetry Prize.  Born in Claremorris, County Mayo, Ireland, Patrick Warner immigrated to Canada in 1980 and since then has lived mostly in St. John's, Newfoundland.

COVER BLURBS
"Warner's poems can be comical, tender, brutal...they are always enlightening in their implied connections, sublime in their musical inventiveness."
—Sunday Independent

"And there you have it: Warner's gift for casting a spell with the sure-wristedness of an experienced fisherman."
—Ruth Roach Pierson, author of Aide-Memoire and Contrary

"A complex poet, capable of seriousness and thought as well as whimsy and play."
—PN Review