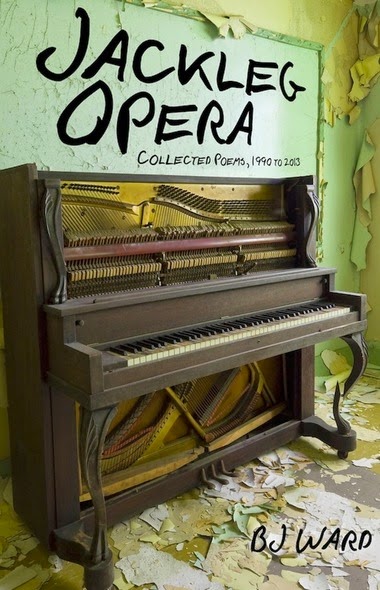 Sometimes opening a book is like taking a deep breath of unexpected fresh air.  I opened up Jackleg Opera and out stepped BJ Ward, maybe the best poet you've never heard of.

There seems to be so little room on store bookshelves for poetry and yet so much great poetry out there for stores to choose from.

So Mr. Ward saunters in, although I'm not sure he'd saunter, I'm thinking he's more of a stroller.  Casually observing the same world you and I walk through, strolling about, but then he gives voice to those moments you had questioned.  He explains a small mystery that had been in the back of your haunted mind.  These aren't the solutions to the mathematical mysteries of the universe but instead small true moments illuminated into song.

And as we all know, I like a bit of humour.

Sitting in the catechism, the priest punching Jesus
into our heads, I stared into the dank hallway
beside the room. My attention snapped

to my hands, rapped by Father Longinus's ruler.
He talked about the cross, the thorns,
the slow driving of nails. It was the pain

that interested my nine-year-old mind,
the coincidental pain of our hands—
hard, deliberate. I ran home

and told my mother that I was Jesus, the Son of God.
She slapped me twice and banished me
to my room, which only convinced me I was Christ.

The next day, I told some classmates
I was Jesus. They didn't believe me
until I named them my apostles—

Saint Hank, Saint Milo, Saint Fat Eddie.
I was ready now for the pain, the crucifixion.
We met at Happy's Ice Cream Parlor for a last supper—

the cone was my body, chocolate fudge my blood.
Fat Eddie had seconds.
We couldn't find a good cross,

so they tied me to a swingset in the schoolyard.
I told them to leave me but not forsake me.
They acted sad, as was planned, and left.

As the night gathered itself, I started
feeling lonely, hungry. My arms tired
from the spread I was in—the opening of an embrace

that was never able to close, to enwrap.
How prone a god can be.
I noticed a patch of wild blossoms

at my feet. They were small, purple.
They looked easy to kick up, so open
and convenient—their thin, sweet petal-meat

would be a wafer on my tongue. And I thought
of why I was there, how it was no fun
being Jesus anymore. I left the blossoms

where they were, as I had found them, and screamed
for my father to come get me, to untie me,
for it to be finished.

BJ Ward seems to hammer out these poems in steady pound like a reliable jackhammer.  He never misses a beat.

Idaho trails from my left penny loafer,
Arizona from my right.
A Nevada waitress hangs from my heart.
The many loves of the many states
are crushed into my wash-needing socks.
My ears still cling to the musicians
I've loved in these places.
There is here, in my pocket,
a memento for you.
It is a sound,
and if you could open it,
your very palms would shiver
with what my travels play
in the small, well-boned ears
you have in your hips,
your legs, your ankles, your feet.

Ward runs the table going from strength to strength.  I found much to admire in these poems.

For the Children of the World Trade Center Victims

Nothing could have prepared you—

Note: Every poem I have ever written
is not as important as this one.

Note: This poem says nothing important.

Clarification of last note:
This poem cannot save 3,000 lives.

Note: This poems is attempting to pull your father
out of the rubble, still living and glowing
and enjoying football on Sunday.

Note: This poems is trying to reach your mother
in her business skirt, and get her home
to Ridgewood where she can change
to her robe and sip Chamomile tea
as she looks through the bay window at the old,
untouched New York City skyline.

Note: This poem is aiming its guns at the sky
to shoot down the terrorists and might
hit God if He let this happen.

Note: This poems is trying to turn
that blooming of orange and black
of the impact into nothing
more than a sudden tiger-lily
whose petals your mother and father
could use as parachutes, float down
to the streets below, a million
dandelion seeds drifting off
to the untrafficked sky above them.

Note: This poem is still doing nothing.

Note: Somewhere in this poem there may be people alive,
and I'm trying like mad to reach them.

Note: The sound of this poem: the sound
of a scream in 200 languages
that outshouts the sounds of sirens and
airliners and glass shattering and
concrete crumbling as steel is bending and
the orchestral tympani of our American hearts
when the second plane hit.

Note: In New Jersey over the next four days,
over thirty people asked me
if I knew anyone in the catastrophe.

Yes, I said.
I knew every single one of them.

This is deceptive poetry of the highest order, rich and full, resplendent and rewarding.  No tricks here, no hidden agenda, these poems come at you straight down the middle of your sensibility and set root. 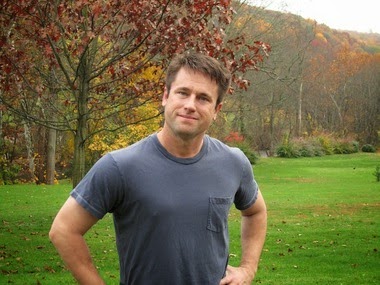 ABOUT THE AUTHOR
BJ Ward's poems having been published in Poetry, The American Poetry Review, TriQuarterly, Painted Bride Quarterly, The New York Times, and other publications. He is the recipient of a Pushcart Prize and two Distinguished Artist Fellowships from the NJ State Council on the Arts. He teaches in the Creative Writing program at Warren County Community College in New Jersey.

COVER BLURBS
"A new voice: welcome it. BJ Ward's, with a new idiom, new accents, new rhythms. Speaking to and for a new generation.... This is where it's at now, he says, and he's right. Singing and squawking. It's beautiful to hear, encouraging to see."
—Hayden Carruth, Poet and winner of the National Book Award for Poetry

"In the chaos of my library I have my top book shelf of about thirty books of contemporary poets that I find jump-start me when I have trouble writing. This book is on there. BJ Ward is part of my generation of poets (born in 1965 or after), but he has somehow fallen through the seams. He should be present in the canon-forming anthologies but isn't. This is a shame... The honest and seemingly simple texture and metaphor of his poems offer us much to help us live our lives."
—Sean Thomas Dougherty, Poet

"In poems that both honor and transcend his blue collar roots, BJ Ward blends poignancy and humor with downright good storytelling, and takes his place among the bright up-and-coming voices of his generation."
—Stephen Dunn, Poet and winner of the Kinereth Gensler Award