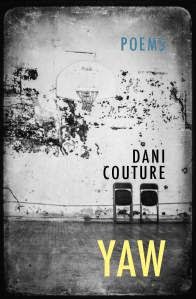 Dani Couture is a poet in full and confident stride.  These solid poems resonate with assiduity and authority.

I am the thermometer's single glass vein.
I am the dull roar of a thousand wet parts.
I am a pan of burnt milk left out to cool.
I am an eye tooth and a quarter short.
I am keeping all the aisles and exits clear.
I am a plastic stretcher on a December beach.
I am thanking you on behalf of everyone here.
I am the neighbour's borrowed knife.
I am twin golden retrievers keeping pace.
I am a street in your honour renamed.
I am both the unanswered phone and the caller untethered.
I am the turned back to the Hail Mary pass
in the last seconds of the final quarter.

Couture has a fine ear for the nuance moment and a sharp enough tongue for the hard of hearing.

tethered to the very
beginning of the record.

It asks not for a change
in direction or stop—

instead, begs
a descending

to meet it. Fanged
iron holding on.

It is not enough
for you to be dead.

Can't take it with you.
But still you try.

You live on
as undertow,

as suggestion:
a gentle voice

on night highway
that whispers, sleep.

Except you forget,
would-be husband,

the year I cried
lengths of rope

Knowing how
is knowing

how not to.
What to twist,

what collar pulled
or slack pushed.

On first go, I read this collection like a hot knife going through butter.  Like a drunk cramming junk food at 3 a.m.  The second read was dinner at a fine Montreal bistro.  The truth is, this slim volume, Couture's fourth, is a feast.

The sky was not blue. It was the colour of a jay,
days dead and frozen to suburb sidewalk.

The man was not holding a telescope, but an umbrella,
its skin peeled back—a cool, silver skeleton.

The word she said was not no, rather a repeated list
of fowl: Little Auk, Rock Ptarmigan, Red Knot.

the hoofprint was not shaped an imperfect moon,
but the inward eye of Large Hadron Collider, the Higgs boson stare.

The neighbour's complaint was never the overhanging tree,
but the hidden sharp end of a hem-worn story.

The problem was not the knitting needles,
but a hillside galaxy of failing aspen.


The feral cat with freshly sewn belly was never yours,
pieces of her dark matter birthed under every porch.

The hum was not centred on some fenced island,
but the communal vibration of our silence.

We regret the errors.

Yaw is a Stuart Ross Book, this imprint offered by Mansfield Press continues to pump out some of the most interesting poetry in the land.  Good on them.

ABOUT THE AUTHOR
Dani Couture is the author of Sweet, which was shortlisted for the Trillium Book Award for Poetry and won the Relit Award for Poetry. In 2011, she received an Honour of Distinction from the Writers' Trust of Canada's Dayne Ogilvie Prize. Her other books include Good Meat and Algoma. Dani is the literary editor at This Magazine. She lives in Toronto.

COVER BLURBS
"Couture is a sensitive and talented writer and her portraits are fine and clear."
—Michel Basilieres, National Post

"Sweet has a complexity that extends far beyond the notes detectable by our mammalian taste buds."
—Stevie Howell, Arc Poetry Journal

"It is easy to borrow Couture's own words to describe hers: honed, pared, exactly cut. Her sensory, often simple, language is kept tidy with meticulous line breaks and punctuation. It's rich with suggestion and sound play..."
—Janet Henderson, Books in Canada

"[Couture has] an ear for the social ecology of humans as tuned as the one for flight patterns of birds or the eating habits of a grizzly bear. Sweet is an excellent read: short, sweet, and constantly challenging."
—Jacob McArthur Mooney, Torontoist