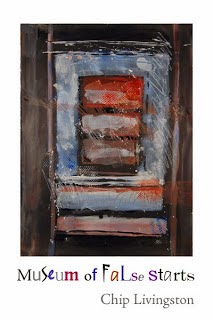 Museum of False Starts is an anthology of the multiple voices of Chip Livingston.  Oh, you can tell he's behind them all, it's a consistent, powerful, moving forward voice—Livingston has much to say and many different ways to say it.

Everything is in here from the secrets of eating mangoes, the real rules to fraternities, lots of spiders and "the anticipated echoes of loons".

Their heads turned as if hedging against futures
The Nelsons danced in silhouettes stopped breathing
Laura's arms loose by her sides like twice as many reasons
Her skirt torn thistledown light — she was river
Walking, free of gravity that anchored me to gravel
And my private rite of standing still

And 20 feet away — 14 and yellow — her son
L.D. swayed to face his mother and a mob no longer hostile
I prayed for them beside the river
Betting deeds to lay as tokens on our future
And begged to never witness anything
Again so grave

As a boy cattled-stringed above the grave
Hands behind his back — kept from reaching for his mother
or for reason
My conscience could not settle this, my first lesson in
lynching
But I joined the crowd and climbed the mount of steel
Posing for the photo bridging judgment to the future
Sealing purgatory there above the river

If history is as long as this river
And my vision isn't buried in my grave
Let the untried present fair-effect the future
And speak to a territory's daughters and sons
I was smiling as the Nelson family's dancing stilled
I was standing on the bridge, I was breathing

Be a secret thing beside the river
Under gravel, hanging still
Above the brittle steel of reason's future

That spiders fall like stars on strings from trees and
ceilings of garages scares the shit out of my tough little
sister, a chemist with a PhD who got a pistol from her
husband for her twenty-sixth birthday. My little sister,
who played in darts tournaments with mustached gay
cowboys at the Round Up on Thursdays, and "whipped
their asses," who used to hunt deer with our father and
race motorcycles with her boyfriends. She sees spiders
now when she closes her eyes. She doesn't sleep at night.
She stays inside and dusts the closets. She won't sit down
until she pounds the cushions on the couch. She shakes
out her throw blanket and pulls her legs beneath her lap —
the way a spider folds its legs when it's about to pounce.
My little sister is ready to jump out of her skin. My little
sister thinks spiders sense her fear and are drawn to it,
spiders who thought her up. So she won't garden; her cats
have allergies; she has sit exterminators on rotation. My
little sister is afraid one exterminator will find out about
another, at a convention or an expo. Her husband doesn't
even know because she uses her own money. But his head
aches behind his eyes when he gets home. He thinks it's
her.

These poems resonate when you put down the book, call you back to affirm what you've read.  Chip Livingston marks his ground.

To sweeten his nose,
Red Ridinghood chewed
cloves and ginger..

To sweeten his ears
she sirened lullabies.

To sweeten his eyes,
she removed her cloak,
angled her head,
and let her maple hair
fall to reveal
her long Etruscan neck.

To sweeten his mouth
Red Ridinghood
bathed in oleander.

Reading Museum of False Starts is a rewarding trip with the advertised detours, although none of these myriad starts feels false.  Livingston hammers these out with authority.

ABOUT THE AUTHOR
Chip Livingston's poems and stories appear widely in literary journals such as New York Quarterly, Ploughshares, Mississippi Review, Cincinnati Review, McSweeney's, and New American Writing. He has received awards from Native Writers' Circle of the Americas, AABB Foundation, and Wordcraft Circle of Native Writers and Storytellers. He has taught writing for the University of Colorado, the University of the Virgin Islands, Brooklyn College, and Gotham Writers Workshops. He lives in New York City.

"...Not a false start at all, this first book is a distant drum announcing a fresh vision and an original approach to craft in our poetry."
—Alfred Corn

"All poets must juggle the sacred and profane and each must make some kind of peace with the paradox, fight it, or find a unique road in the up and down. Chip Livingston, in his first book, Museum of False Starts, makes a distinct trail of poems, through Mvskoke ancestral country, through the maze of American myths, through bars and parties at the edge, through disturbance and awe. What an auspicious beginning!"
—Joy Harjo, Mvskoke poet, musician and performer