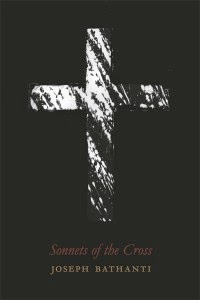 If Mark Twain were a Baptist minister and he was narrating the biblical baptism by fire of one of the "Our Gang" characters — maybe that's the feeling I'm getting from Joseph Bathanti's most excellent Sonnets of the Cross.

Or try this one — you've got Thomas Hart Benton painting the background for a Catholic pavilion populated by questionable louts of dubious faith and the ghost of Bill Hicks.  None of these people actually appear in these poems.  What I am trying to do is share some of the feeling these poems create.

He came late to walking and I fretted
lest the blue yield of my virginity
was flawed in marrow and sinew whetted
by innocence whelping Divinity.
He could speak, but refused. He knew His name,
knew Iscariot was His betrayer,
the psalter's achieve portending His fame,
had committed to memory Isaiah.
His first toys were hammer, nails, adze and awl,
His own apprentice bench from which he pitched
and split a cleft above his eye, a fall
that would have killed another child, I stitched
my pretty baby while he read a poem
about bands of angels bearing him home.

It has been a long time since I've read the Bible and it will probably be a long before I read it again - but if I were going to I would want it translated by Bathanti.  I find his language, idiom, dialogue all utterly sublime.

These fable like sonnets are perfectly twisted to fit your ear.

They bump into Him shopping in Bloomfield.
It's how many years?  He's skin and bone.
The hair.  The beard.  Some kind of radical.
But still He shows respect, kisses each one,
inquires about their health, tells them to pray,
ask anything in His name and it's theirs.
They laugh.  He's probably on drugs, they say.
His poor widowed mother.  Thirty-three years
old, a grown man, and still can't settle down.
The little bit He makes He gives away,
while poor Mary sits in one room downtown,
practically on welfare, day after day.
they don't mention the thorns or bloody cross.
He's not a bad kid, just a little lost.

Sometimes you find poems and sometimes they find you.  Joseph Bathanit's Sonnets of the Cross may be an instructional manual for an introduction to faith or a guide to writing better poetry.  Take your pick.  I found these solid poems thoroughly entertaining, full of deprecating humour and a particular charm, wit and intelligence.

Jesus's Body Is Removed From The Cross

My father, Paul, and Ronnie Villani
laddered up to cut Him down at 3 sharp
in flouts of lightning.  The Allegheny
caught on fire, its banks brimmed in boiled carp.
With claw hammer and crowbar, my dad pried
the spikes from His hands and feet.  In the end
he hack-sawed the rusted pig iron, and cried,
working quickly because the Pinkertons
the strike-breakers had hired to execute
the Union Christ sped back to Golgotha
to jail them.  Ronnie bore Him to the boot
of Paul's blood-red Oldsmobile Electra.
They drank to the Savior: Corpus Christi.
Shots of Black Velvet chased with Iron City.

This beautiful limited edition chapbook was designed by Dave Wofford of Horse & Buggy Press in Durham, North Carolina.  The images used to illustrate this book were created by Ron Moss.

ABOUT THE AUTHOR
Joseph Bathanti is the Poet Laureate of North Carolina. He is the author of six books of poetry:  Communion Partners, Anson County, The Feast of All Saints, This Metal, Land of Amnesia, and Restoring Sacred Art.  He is the recipient of two Literature Fellowships from the North Carolina Arts Council, the Samuel Talmadge Ragan Award, the Linda Flowers Prize, the Sherwood Anderson Award, the Carolina Novel Award, the Novello Literary Award, the Spokane Prize, the Roanoke Chowan Prize, the Ragan-Rubin Award for Literary Achievement, and the 2013 Mary Frances Hobson Prize.  Bathanti is Professor of Creative Writing and Writer-in-Residence of Watauga Global Community at Appalachian State University,