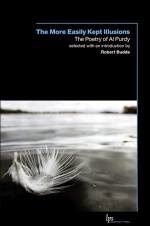 There is very little I want to say about the work of Al Purdy except that I revere him like a God.

The Laurier Poetry Series should be a must for every library in our country.  These excellent books focus on our best poets and present them in the best light.

What they worry about most is injuries
broken arms and legs and
fractured skulls opening so doctors
can see such bloody beautiful things almost
not quite happening in the bone rooms
as they happen outside
And the referee?
He's right there on the ice
not out of sight among the roaring blue gods
of a game played for passionate stockbrokers
children wearing business suits
and a nation of television agnostics
who never agree with the referee and applaud
when he falls flat on his face
On a breakaway
the centreman carrying the puck
his wings trailing a little
on both sides why
I've seen the aching glory of a resurrection
in their eyes
if they score
but crucifixion's agony to lose
—the game?

And how do the players feel about it
this combination of ballet and murder?
For years a Canadian specific
to salve the anguish of inferiority
by being good at something the American's aren't
and what's the essence of a game like this
which takes a ten-year fragment of a man's life
replaces with love that lodges in his brain
and substitutes for reason?

Besides the fear of injuries
is it the difficulty of ever really overtaking
a hard black rubber disc?
—Boys playing a boy's game in a permanent childhood
with a screaming coach who insists on winning
sports-writer-critics and the crowd gone mad?
—And the worrying wives wanting you to quit and
your aching body stretched on the rubbing table
thinking of money in owners' pockets that might be yours
the butt-slapping camaraderie and the self-indulgence
of allowing yourself to be a hero and knowing
everything ends in a pot-belly

Out on the ice can all these things be forgotten
in swift and skilled delight of speed?
—roaring out the endboards out the city
streets and high up where laconic winds
whisper litanies for a fevered hockey player
Or racing breast to breast and never stopping
over rooftops of the world and all together
sing the song of winning all together
Sing the song of money all together

The poems I've chosen for TODAY'S BOOK OF POETRY are all standards, classics.  And why not?  Al Purdy is a giant.  To quote David McFadden,  these are poems worth knowing.

I was justly annoyed 10 years ago
in Vancouver: making beer in a crock
under the kitchen table when this
next-door youngster playing with my own
kid managed to sit down in it and
emerged with one end malted—
With excessive moderating I yodelled
at him
"Keep your ass out of my beer!"
and the little monster fled—
Whereupon my wife appeared from the bathroom
where she had been brooding for days
over the injustice of being a woman and
attacked me with a broom—
With commendable savoir faire I broke
the broom across my knee (it hurt too) and
then she grabbed the breadknife and made
for me with fairly obvious intentions—
I tore open my shirt and told her calmly
with bared breast and a minimum of boredom
"Go ahead!  Strike!  Go ahead!"
Icicles dropped from her fiery eyes as she
snarled
"I wouldn't want to go to jail
for killing a thing like you!"
I could see at once that she loved me
tho it was cleverly concealed—
For the next few weeks I had to distribute
the meals she prepared among neighbouring
dogs because of the rat poison and
addressed her as Missus Borgia—
That was a long time ago and while
at the time I deplored her lack of
self-control I find myself sentimental
about it now for it can never happen again—

Al Purdy, although admired, has yet to be properly canonized.  But make no mistake, he is securely snug in the blanket of his legacy.  These are all poems we should teach our children to recite from memory.

This volume serves as a marvelous introduction to those unfamiliar with Purdy and as a welcome addition to the vast catalogue of critical material available.  Robert Buddes fine essay on Purdy is in tune with the Laurier Poetry Series mandate.

I am currently reading We Go Far Back In Time (The Letters of Earle Birney and Al Purdy, 1947-1987), which makes this final poem so tender for me.  This poem reminds me that giants once roamed this land.

He knows me and does not
know me and the fatal
facility for transposing
myself into another someone
ends with me peering out
from his eyes into my eyes
and dizzily thinking
My God! My God!
I have stopped being Me!

But calmer now:
he knows me and does not
know me and I am coloured
shadow in sunlight
his brow furrowed and puzzled
with his effort of not knowing
poems he's written and not written
yet that will never be
and he smiles in memory
of whatever smiling was
and it is somehow left for me
to write them remembering pain
of not writing beyond
this grey land of nowhere
forgetting the pain before
beautiful verb and handsome noun
agreed to live together
for better or worse somehow
and kicked their heels
in the printed word
while the shadow stranger waits
the strange shadow
watching and ill at ease
and a little afraid:

as he questions himself
asks himself: Who is this guy?
Why is he here?

At that very moment
when the puzzlement is greatest
I smile at him
and the why and the smile together
glow just beyond the poem
and shine on his face and his face shines
and for that one moment
my friend remembers
among the multiple choices
of his lost remembering
he chooses
and the poem blossoms.

Al Purdys' major influence over contemporary poetry in Canada will remain for as long as people are writing poems.

ABOUT ROBERT BUDDE
Robert Budde teaches creative writing and critical theory at the University of Northern British Columbia in Prince George. He has published two books of poetry (Catch as Catch and traffick), two novels and a book of short fiction.  He maintains two online literary journals at http://stonestone.unbc.ca and http://writingwaynorth.blogspot.com.