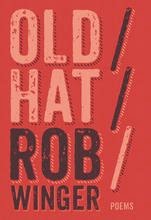 Rob Winger's Old Hat is that something new you were waiting to read.  These poems have that haunting quality of deja-vu.  These poems are sometimes a little like that dream you just can't quite remember until Winger puts his finger on it.

Re/Signs From The Big Board

Do not arm raises.
Do not intersect blockage.
Do not drink your drives.
Do not attempt to defeat the polarization
of your plugged-safe attachment purpose.

Exit emergencies only.
No red on rights.
Enter donut.

The Fox expressed here does not represent the opinion of views.

Persecutors will be violated.
Performers may be strip-searched.
Suggestive parenting is strongly guided.
This is an open door, never keep fired.

Board on, baby.
Come on to yielding traffickers.
Bump speed ahead.
John 16:3.

Please inform your pregnancy if you suspect you are a doctor.
Please keep excessive minimums to a noise.

If you have a nurse, please give it to your x-ray.

Please keep your personal longings with you at all times.

At the dash of the long end, followed by six seconds of silence,
the clock will be one.

It's the know of the world as we end it.

These poems are SO Canadian, Al Purdy would be proud.  The characters in these poems understand that Wayne Gretzky is a de facto Head of State/Saint/lead character in part of our National Dream.  They also understand our national small-town ethos.  Winger juxtaposes small-town Ontario and our Mike Holmes hopes against a world where the Joy Division sings national songs.

What We Thought
after Matthew Zapruder

You put on the first album you ever bought
and the pastel map turns dusty.
Remember the margin where the song
dips down into silence? Can that take us

to the Sunday School basement, where Judas or Peter dies,
so they lay his felt effigy sideways on the green board
and raise triumphant above their pinkish hands a radiant
red-headed Christ? (None of them have heard of Palestine.)

Next door, the country-mile railroad leads to shows:
a visiting Methodist choir; a visiting Presbyterian missionary;
a visiting troupe of men in cork, their olde-tyme stump speeches
unsure how creaking clippers got retired from the sea.

It's best to understand we were just kids. That we built dangerous
forts out of bent Plexiglas, climbed green quarry walls,
trudged over nuclear-waste mountains to school every morning
and only ever knew Cowboys and Indians.

The genteel townsfolk still used the word "negro" then.
We lumped it in with all our other translations for "foreigner."
Wayne Gretzky had grown up next door, and damn, he was Polish,
we thought; not a single one of us knew Grant Fuhr wasn't German.

In that Alice Monroe story, written before we were born,
they cram into the crumbling town hall to stare at the black Africans
and wring their hands with pleasure when they sing so "authentically."
Somewhere in 1979,  that's happening in small-town Ontario;

it might be still. We were made to read their stories, though not as if
they mattered. Our fathers worked with them, lowering steel into
the underworld of smelters. They called them strong but didn't elaborate.
How we've ever found the names for things I'll never know.

Somewhere, I ride my first thirty-three-and-third RPMS
down the angry Appalachians all the way
to the muddy south, where the needle hits its vinyl edge,
then goes to sleep in its silent, salted cradle.

These wonderful poems are full of a myriad of delights.  Smart poetry always comes first on my poetry pedestal.  Old Hat is learned wisdom, new lessons, an almanac of Wingers' excellent imagination.

I'm explaining to my class that no one knows
anything about anything.

Truth is a tortoise photographed
in the seventies. I say, or, as one guy puts it

from the back row, the only thing for sure is that
"I do and/or do not exist," stressing his oblique.

There's no Walt Whitman, I'm saying, up there,
in a respectable shirt made in Bangladesh,

unless we all agree that the milk in the glass
from the cow is the farmhand.

Outside, the sky continues it meaninglessness.
The potted plants don't bother to lament.

Heels sink into lawns and airplanes become algorithms
for the deep weight of heavy water.

There are expressions digging in
beyond the lectern's bored cement.

Everyone, I'm saying now, eats the carrot root
and throws away the flowers.

Nothing I say is ever ready
for reason.

Old Hat turns cliche inside out, literally.  These are taut, tender and tense occasional poems that step away from the self-imposed universes and frameworks self-imposed upon Winger in his two earlier books.  These observational poems are laser guided and still reflective.

Reading Winger, for me, is like dipping into an old John Steinbeck novel, where there is always twice as much on the page as you originally thought. 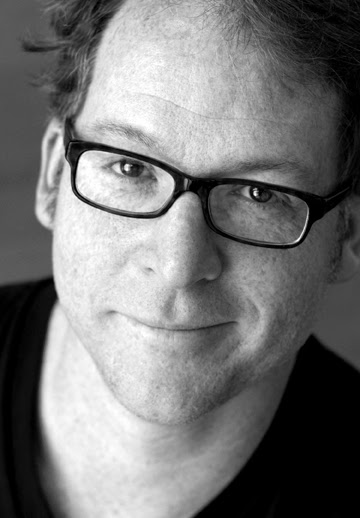 ABOUT THE AUTHOR
Rob Winger's first book, Muybridge's Horse, was a Globe and Mail best book, shortlisted for the Governor General's Award, Ottawa Book Award, and Trillium Book Award for Poetry, and won a CBC Literary Award. His critically  acclaimed second collection was The Chimney Stone.  Born and raised in small-town Ontario, Rob is a proud alumnus of Mount Allison University, has a MA in English Literature from the University of Guelph, and has a PhD from Carleton University. He currently lives in the hills northeast of Toronto, where he teaches at Trent University.

"so finely achieved — its luminously sustained lyric, its compelling narrative, its inventiveness and virtuosity"
—Dionne Brand

"a remarkable achievement"
—The Globe and Mail