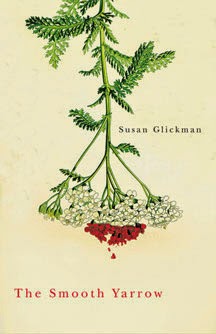 I fall into Susan Glickman's books as easily as into conversation with a dear old friend.  Her voice just sounds so natural to me and I am endlessly curious to see what she wants to talk about next.

You would be hard pressed to find a more natural voice in Canadian poetry and a voice full of such casual authority.

Not particularly cold, it blushes slightly, a tiny bud
in the shadow of my left breast. You'd think it a freckle
or a mole and not be as far wrong as those who
four hundred years ago
would have burned me alive at the sight of it
after, of course, a significant interval of gratuitous torture
involving spikes being driven into various parts of me
tender anatomy and ending not in confession
but in exhausted and probably unconscious silence.

But who convinced the witch-hunters that evil marks the flesh?
And who was not deformed back then by something or other—
the body a map of disease and malnutrition,
stinking, lice-ridden, with bleeding gums and falling hair,
eyes clouded by cataracts, lids drooping with palsy, limbs trembling with ague,
pocked with sores, tumours, abscesses and ulcers.
Yet they ignored clear evidence of our shared mortality
in their search for one singular blemish, an extra nipple
with which to suckle a satanic familiar.

You'd think that centuries of plot and counterplot would have revealed
that most successful villains are unremarkable, their bodies
as fallible as ours, their faces as plausible, their stories
as full of lamentation and excuse. That the hand of God
if it bothered to write to us at all would surely be less
inscrutable. But no.
The encryption of the universe continues beyond our comprehension
as we study the marginalia on each others' skin
blinkered and enraged, seeking somebody else, anybody else,
to blame.

Glickman has been writing the same solid line since she published her first book of poetry Complicity (Signal Editions, 1983).  Like all of her poems, those in The Smooth Yarrow are so humane and heartfelt and yet there is a tension underlying this naturalness - and it is that tension that makes these poems/stories universal.  Glickman knows what it is that we want to know.

The baby, insatiable, eats you,
your cheek round as a breast
and almost as soft.

He pats it as a baker pats dough—
part scientist, part lover.

The dog licks his ass
and then your face;

nature's egalitarian,
he means it kindly.

Mouth to mouth
we find each others' softest places
and breathe.

Along with those many other traits I've long admired in the poetry of Susan Glickman, there has always been a fine sense of humour.  Humour is far too rare in the world, certainly far too rare in poetry.  With Glickman her wit is never far away from her wisdom.

I have always been partial to poems that are lists and in the following poem Glickman lists a litany of small defeats and fear.  It could be my list - or yours.

Things From Which One Never Recovers

A 42-year-old eardrum burst in sympathy with an infant's infection
the arbitrariness of luck, both good and bad,
sunrise over a field of poppies south of Sparta
the boy in university who said I'm sorry, but I only want to be lonely
the girl on the high school basketball team who said
You have the biggest ass I've ever seen
the taste of cod-liver oil in a spoonful of molasses
administered by a schoolfriend's proper British mother
as a prophylactic against obsolete diseases
betrayal
giving birth
snorkeling for the first time in tropical waters—
how the fish part impassively to let one through
and carry on, oblivious to their own casual beauty
a contemptuous review that gets everything wrong in elegant language
like a sadist with impeccable manners
the entrenched injustice of the world that renders one's own problems
too trivial to mention
that there are different kinds of shoes for every sport
but only one pair of arthritic feet
Chopin's 24 Preludes, Opus 28
discovering the possibility of a really good wine
having a wild bird eat from your hand
being lied to by your child
seeing your child hurt and being unable to do anything about it
being hurt yourself and being unable to do anything about it

The Smooth Yarrow is Susan Glickman's sixth book of poetry.

ABOUT THE AUTHOR
Susan Glickman has won both the Gabrielle Roy Prize and the Raymond Klibansky Prize for her work of literary criticism The Picturesque & the Sublime:  A Poetics of the Canadian Landscape.  Her first novel, The Violin Lover, won the Canadian Jewish Book Award for fiction.  She teaches creative writing and is a freelance editor.  She lives in Toronto.

COVER BLURBS
"I gripped by Glickman's clear voice, and her frankness soon earned my trust.  But what wins me is Glickman's ability to tackle big emotions while confronting ambivalences."
—Sonnet L'Abbe, The Globe and Mail

"Glickman is capable of unpredictable metaphor and those insights toward which every poet strives:  the ones that startle with both truth and originality.
—The Malahat Review