Not sure what Donald McGrath was up to for the last twenty-two years.  His first book, At First Light, was a killer.  Nothing new here, I mean the poems are all very fine, McGrath is still a killer. Stone cold good poet.

Donald McGrath is simply heroic.  Not jumping into a burning building to save babies heroic, although I'm sure he'd rise to that occasion, but poet heroic.  These poems are broader than the pages they're written on and deeper than that blue, blue sea that surrounds the Newfoundland of McGrath's memory.

The faint arcs of other children's voices, the clop-clop of hooves,
the squeaks of a dray.
And the shadow of the hay load on the curtains
thickening the dusk where you lie, feverishly lucid.

Outside, all in light, others are going swimming by the flats
or upriver, by the falls.
They toe their way sideways on railings
flush with the frayed edges of green islands.
They dabble the soft mud along the perimeters,
warm mulch squeezing through toes.

A buzz in the room — is it a fly? Or the saw
in the mill down by the beach? The mill
with its spongy caramel pyramids
and its pallid logs grieving in the gloom.

Foam slides out over a glistening expanse of black sand inscribed with the
hieroglyphics of pipers and terns.

In high meadows, boys and girls walk in loose rows
turning over hay with pitchforks.
One boy has driven his into the earth and stands there,
chin upon the red-speckled shaft,
daydreaming about the ancient Assyrians.

Women with mops, bright plastic buckets and field flowers
stroll up the lane to the white clapboard church
with its green wooden cupola.

Old men in shiny-ass dress pants and tobacco-stained cardigans
sit smoking pipes on a mound
with a fine view of three bridges and a post office.

A first skiff appears on the bay, hieratic in its halo of gulls.

This is poetry that makes you want to listen harder.  The Port Inventory washes over the reader with wave after wave of masterful story telling that is both ornate and sublime.

And McGrath has a great sense of humor.

We'd use our pocket knives to sever
the eyes from their connective string,
angling the gurried blades to prise them
from their sorry sockets.
Our mother plopped them
on a cookie sheet and slid it
into the oven, taking care
to separate them so they wouldn't stick.
They emerged a cloudy grey, their glassy lustre
cooked to a Point Lance fog.
If we were lucky, we might
cajole them to roll an inch or more
until they stuck, glutinous, to the floor,
staring blindly up like Paul,
dead to Damascus.

These poems sound as though Alistair MacLeod combed them with his meticulous pen, constantly nodding to himself in approval.

But you'd be wrong to think The Port Inventory stops at the shores of the Rock.  McGrath has a range far broader than an island or a country.  This voice gives meaning to the world at large as it travels through it.

At the Rudas Baths, in the dim light
a strange lugubrious language issued
from pale blotches bobbing above the water:
Mit-tel Eur-opa  Mel-an-cho-lee-ah.

At the Gellert Hotel
a hussar with a handlebar moustache
slapped me pink then hosed me down
on a gun-metal table.

In the Church of Saint Istvan
I dropped a coin into a slot:
a light flicked on inside a glass box.
I had two minutes to take in
the withered tuber of the saint's hand.

In the National Gallery, Sandor Petofi,
the poet who started a revolution
not of the word but of the gun,
rested after battle, smoking.

He was painted, I think, by Munkascy,
who, when he lived in Paris,
was so well known that all you had to do
was write "Munkascy, Paris" on your envelope.
He was given a state funeral, like Victor Hugo.

A young woman in a low-cut gown, hair up,
seconded by a scrubbed youth, approached
our table and from a drawstring sack
produced a pack of Hugo Boss cigarettes.

She offered an exchange: ours for these
and if we liked the, perhaps we all could go
someplace and play blackjack.

We took coffee in the Hotel Astoria,
formerly favoured by the Nazis
because of its elegance and because
it was close to work, near the Ghetto.

Its facade was held up
by wooden scaffolding. In 1956,
a Russian tank
had made a beeline for the tea room.

These poems are rich and full bodied.  This is a feast of poetry when many are only offering snacks. 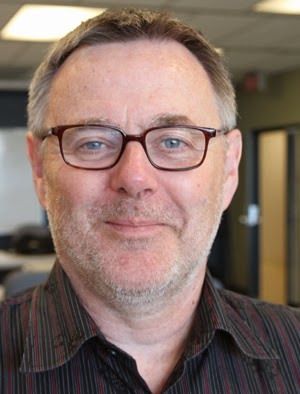 ABOUT THE AUTHOR
Donald McGrath grew up in a fishing village on the Avalon Peninsula of Newfoundland and moved away from the island at the age of nineteen to study art at the Nova Scotia College of Art and Design. He has been a longshoreman, factory worker and waiter, and currently works as a translator in Montreal, where he has lived for the past twenty-five years. He has published in periodicals and reviews in Canada, Australia and the UK, and is the author of one previous poetry collection, At First Light (1995).

BLURBS for At First Light
"Donald McGrath's work manages to embody invisible things like faith, curiosity, and longing. And he does it with such imaginative panache that even the darkest poems are a delight to read. His childhood adventures in Newfoundland are enthralling: mystery and absurdity explored with the zeal of a saint."
—Barry Dempster

"McGrath's poems about his Catholic childhood in Newfoundland have the immediacy of 'holy water sprinkled on a stove', 'hissing and sputtering devilishly' with a whimsical, irreverent lyrical voice. His comical, ironic turns of phrase and his real insight into the people and world of his youth combine to make a vibrant, lively local clime for his poetry, and our pleasure."
—Ted Plantos

"His use of both the conversational and ritual talk of outport Newfoundland expands my understanding of the Canadian language. McGrath's way of telling enlivens the tale. Often these poems borrow the beauty and sensibility of the riddle. They achieve their most vivid effect after they conclude."
—Richard Harrison