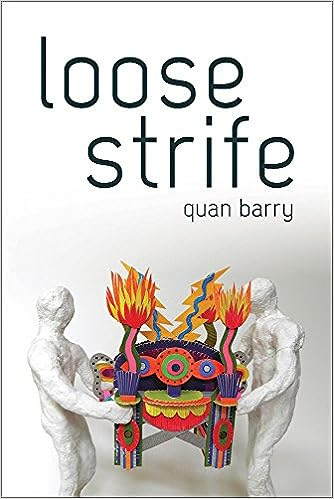 Not that smarmy bright light "and for my next trick..." magic.  Barry is magical because she instantly transports the reader to a new reality.  We recognize where we are at all times when reading Barry but also realize it has never looked quite so real in quite this way.

Whether she is writing about the killing fields of Cambodia or the tunnels of Cu Chi, and we have all heard the horrors, the reader is whisked to a reality previously invisible and unavailable.

Barry pulls off the remarkable feat of being clear like crystal but hard as diamond, hard as nails, and at the same time so gently and lovingly human, it is almost impossible to reconcile the two.  Barry does it.

Loose Strife is in this case -  the endless battle we all endure in trying to become humane.  Quan Barry is quite simply masterful.

Listen  closely  as  I  sing  this.   The man  standing  at  the  gate
tottering on his remaining limb is a kind of metronome,  his one
leg planted firmly on the earth. Yes, I have made him beautiful

because I aim to lay all my cards on the table. In the book review
the  critic  writes,  "Barry  seeks  not  to judge but to understand."
Did she want us to let her be, or does she want

to be there  walking  the  grounds  of  the  old  prison  on  the hill
of the poison  tree where comparatively a paltry twenty thousand
died? In the first room with the blown up

black-and-white  of  a  human  body  gone  abstract  someone has
to  turn   and   face   the   wall   not  because  of  the  human  pain
represented in the photo but because of her calmness.

I  felt  it  come  over  me  and I couldn't stop. I tried to pull myself
together  and  I  couldn't.   They  were  children.  An army of child
soldiers.  In the room papered with photos of the Khmer Rouge

And  the  photos  of   the victims,  the woman holding her newborn
in   her  arms  as  her   head  is  positioned  in  a  vise,  in  this  case
the vise an instrument not of torture

but  of  documentation,  the  head  held  still as the camera captures
the   image,   the   thing   linking   all    their  faces,  the  abject  fear
and total hopelessness as exists

in  only  a   handful  of  places  in  the  history  of  the visible world.
For  three  $US  per  person  she  will  guide  you through what was
Tuol Sleng prison, hill of the strychnine tree.

of poetry in this country and each one is still meant to be sung.


PLEASE NOTE, TBOP was unable to reproduce Quan Barry's poems exactly as they appear in her book.  We apologize profusely to both Ms. Barry and to the University of Pittsburgh Press.  We here at TBOP will continue to try to improve our technical proficiencies.  A thousand monkeys, a thousand typewriters.

Perhaps a word about style.  Today's book of poetry has no clue why Barry has chosen a variety of formal constructs for her poems.  These deliberate forms are consistent blocks, columns of text with perfect margins down both sides.  I'm sure it means something and I assure you there isn't a comma out of place in these panoramic puzzles.  But I don't know what it means and don't really care.  Why would I?  Loose Strife is a solid as it gets, Quan Barry is a stone cold heavyweight.  Period.

Do you get the idea that TBOP likes this absolutely stunning book?  Loose Strife compels you to turn the page.

These poems have heart and are heartlessly blunt.  These blunt poems have beauty in spite of the bloody wounds they sever open.

Everyone dreams of being harmed.  It's easy.  If I were to restructure the narrative,

It   was  November.  I stood as my hands slowly froze, the whole world passing me by


stringing  her  up  by  a  series  of  hooks  before  finally garroting her with bailing wire.

Something  that  will bear  her  up.  In  ancient  Greek  there  is  a  noun  for the blessing

These poems have power, magic and grace.  Hard to beat those three.

Quan Barry is spectacular, seriously.  These poems move us all one step closer to a better understanding of what it is to be human beans.


ABOUT THE AUTHOR
Quan Barry is the author of three previous poetry collections: Asylum, winner of the Agnes Lynch Starrett Poetry Prize; Controvertibles; and Water Puppets, winner of the Donald Hall Prize in Poetry. She is also the author of the novel She Weeps Each Time You’re Born. Barry has received two fellowships from the National Endowment for the Arts in both poetry and fiction. She is professor of English at the University of Wisconsin-Madison.

“Violence across history, from Greek myth to modern American serial killers and the Cambodian genocide, animates this disturbing and graphically original fourth effort from Barry (Asylum). She utilizes dual-justified and unusually arrayed text to fit stark scenes where we find someone ‘hiding in a space meant/ for buckets and rags as// next door the soldiers/ drag away a young boy,’ or, in a modified ghazal, a witness at Golgotha watching ‘a man nailed like/ a bloody flag to two pieces of/ wood.’ Taking in ecological as well as human horror, falling gingko pods remind Barry of failing satellites, ‘all of which some day will come tumbling back.’ In a series of poems that belong together despite their diverse scenes, she tries ‘to describe the unimaginable/ in a time and a place when sadly everything is imaginable.’ Those vivid pictures, and their self-consciousness about what it means to narrate extremities, perhaps benefit from the book's origin in a collaboration between Barry and visual artist Michael Velliquette. And yet the book stands up, and stands out, on its own. Barry risks the lurid, and the knowing, but comes out more like a prophet, overwhelmed-sometimes sublimely so-by the first- and second-hand truths she must convey.”
--Publishers Weekly (starred review)

"Born in Saigon and raised in Boston, Barry is the author of three previous collections of poetry and a novel, She Weeps Each Time You're Born. In a review of Water Puppets (2011), one critic says, 'violence is a shocking misfortune that remains foreign, beyond [Barry's] personal borders.' And yet, in this book, Barry's poems take jarring, strange arrangements on the page: scrambled and center-spaced with black bars across lines like censored transcripts. The unusual use of space enacts a subtle violence on the reader, frustrating expectations of how poetry should appear. Likewise, 'loose strife' refers to the sowing of chaos in the tragic plays of the Oresteia, and an undercurrent of deconstructed Greek pervades the work ('Pandora's Box, from the Greek word / pithos, what in actuality was a jar, an urn'). In one poem, Barry quotes the aforementioned review and responds with a story of being 'robbed at gunpoint on a deserted road.' Barry offers a difficult, sophisticated look at violence in personal, historical, and textual forms."—ALA Booklist

Poems cited here are assumed to be under copyright by the poet and/or publisher.  They are shown here for publicity and review purposes.  For any other kind of re-use of these poems, please contact the listed publishers for permission.
Posted by Today's book of poetry at 9:32 AM