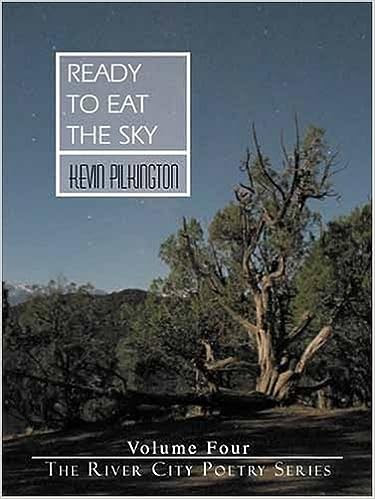 Ready To Eat The Sky by Kevin Pilkington was published in 2004 but it only arrived on our desks here at Today's book of poetry recently.  I figure it was stuck in the mail somewhere between the continental divide and Swansea, Wales or Carmathenshire.

Pilkington is a Dylan Thomas fan and devotee.  If that's where you're going to set the bar you are dancing in pretty high cotton, you are going to have to be ready to burn.  Kevin Pilkington is up to the task and does some pretty sweet cooking in Ready To Eat The Sky.

These poems sound and feel like anecdotal narrative poems but that's a trick.  What they really are is emotional Venus-fly-traps.  Pilkington gets right into your bloodstream.

We had lunch
in a local trattoria
built into coastal rock,
picked a table on the deck
a few feet above water
that looked like the last
good novel I dove into.

A waiter came over
leaning on two metal canes.
He walked like stone
and his English was a coastline
of jagged rock. His smile
brought the sun closer,
and we said grazie
to things the sea didn't
need that day.

Another waiter brought
a pitcher of wine
with a round gold peach,
a tiny moon you can peel,
resting on the bottom.
We drank it with a salad
and tomatoes so sweet
and red the church should
make Satan blue.

Our main dish was grilled
fish who hadn't lost
their heads to the chef's knife,
or over the wrong woman
the way I did a while back.
We didn't recognize them
either. They might have been
French, swam down here
for the day, then were tricked
by hook or net.

They tasted as rich
as the sun resting
on waves filled
with every gold coin
from every ship that sank
since Caesar and kept
rolling towards shore.

Pilkington's golden tongue skirts the sweet edge of revealing too much, he's almost always on the verge of giving it all away.  He's a tease.  Once he gets you hooked he just starts reeling you in as easily as the big Hem on a Cuban fishing boat.

The sweetness doesn't hurt a bit and there is always just a pinch of tart when you need it.

When I did the office poll the vote was 9 to 1 for going with Pilkington today.  Our typesetter, Milo, doesn't like a damned thing, he tells us daily, yells at us in fact, "that there hasn't been a poet worth his/her salt (he puts in that slash with a wild gesticulation of his little spindly spiny spider white arms) since Ezra lost his gamble!"  We tolerate Milo because he can bake.

My brother and his wife
bought a hunting dog.
It's white with black patches.
There's one that's shaped
like Rhode Island, a small state
that isn't too heavy for a three-
month-old puppy to carry
around on his back. As
he gets older, stronger and puts
on weight, it will stretch
into Texas.

They have already taught
him to sit but he is still
too young to learn about Jesus,
so when they took him
to the beach, he tried walking
on water, fell in then turned
and attacked a wave,
ripping it to shreds.

A mound of cookie dough
on a plate is how he sleeps
on a round mattress and
dreams of rabbits or grouse.
For now a tennis ball
is enough to hunt down,
and sheets flying like ghosts
over rose bushes from
a neighbor's clothesline
is what makes him bark.

My brother and I take him
out on the lawn, throw
his a stick into tall grass.
He runs after it, his ears
that will never be trained
bounce and flap like a loose
shirt. He comes back
with the stick in his mouth
and every dog we ever
had as kids following him.
We can't believe how many
years have gone by since
we've seen them. Then we sit
down on the grass, smile
and watch all our dogs
running.

Come on!!  A poem about puppies.  Give us a freaking break!!  But, but, but, I love this poem, and almost every other single poem in this great collection.  Pilkington could probably amuse me with a poem about the phonebook.  Probably get a tear in my eye as well.

Today's book of poetry was charmed, charmed, charmed by the elastic wit Pilkington uses as an emotional tightrope.  These poems are constructed like the pyramids.  One solid block on another. And so on.

I read these poems like eating dessert, they were such a pleasure to devour.

Even too much wine
can't stop all the hurt
you packed, but thought
Customs would never let
you bring into the country.
When they asked if you
had anything to declare,
you said the last ten years.

Somehow you can still
walk past the medieval
tower tonight is just
how the Amalfi coastline
gets a hard-on for water,
cars, moon or anything
that moves. So you sit
on a bench.

Low tide rubbing against
rock is how a song finds
a way out of your throat.
And to think you couldn't
speak a word of Italian
when the night began.
But since English never
made any sense and makes
even less now, you decide
never to speak it again.

A couple is standing in
front of you. The man looks
Polish enough to be the pope
and the woman with him
is so large they must rub
her thighs down with olive oil
to squeeze her into Rome.
They are laughing but since
it's a joke you know the punch
line to, you laugh even louder.

Then they are gone and there
is a church like the one
in Sorrento where Christ
is stone. Before you think
about converting to concrete,
you are in an alley leaning
against a building older
than Octavian. A woman
is kneeling in front of you
opening your belt. And
this is where it happens,
the very moment when
you become the last saint
on the face of the earth
who doesn't have a prayer.

Kevin Pilkington has made my day.  Ready To Eat The Sky is a simply delicious book.  Find it.

ABOUT THE AUTHOR
Kevin Pilkington ​​​​​​​​​​is a member of the writing faculty at Sarah Lawrence College. He is the author of six collections: his collection Spare Change was the La Jolla Poets Press National Book Award winner and his chapbook won the Ledge Poetry Prize. His collection entitled Ready to Eat the Sky was a finalist for an Independent Publishers Books Award. A collection entitled In the Eyes of a Dog was published in September 2009 and won the 2011 New York Book Festival Award. Another collection entitled The Unemployed Man Who Became a Tree was recently published. His poetry has appeared in many anthologies including Birthday Poems: A Celebration, Western Wind, and Contemporary Poetry of New England. Over the years, he has been nominated for four Pushcarts and has appeared in Verse Daily. His poems and reviews have appeared in numerous magazines including: The Harvard Review, Poetry, Ploughshares, Iowa Review, Boston Review, Yankee, Hayden’s Ferry, Columbia, North American Review, etc. His debut novel entitled Summer Shares was published in June 2012.

BLURB
"In Ready to Eat the Sky the reader encounters a poet of extraordinary fineness of vision, one whose language adheres to the surface of realities with an elegance and simplicity rare in today's poetry. There is humility and grace of being in these poems, which stand before the world openmouthed, hat in hand, heart on sleeve. I take guilty pleasure in the poems of Kevin Pilkington, and consider him an essential voice in contemporary poetry."
-- Jay Parini, author of Why Poetry Matters

PLEASE NOTE:
We here at TBOP are technically deficient and rely on our bashful Milo to fix everything.  We received notice from Google that we were using "cookies" and that for our readers in Europe there had to be notification of the use of those "cookies.  Please be aware that TBOP may employ the use of some "cookies" (whatever they are) and you should take that into consideration.
Posted by Today's book of poetry at 8:08 AM