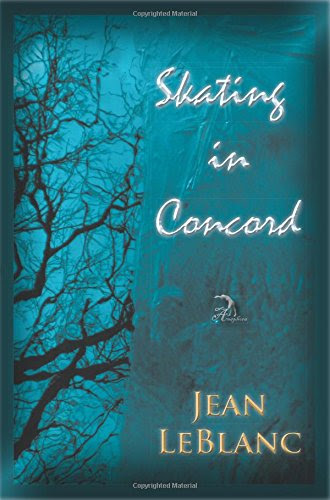 Jean LeBlanc's Skating in Concord is a brazenly celebratory re imagining of Henry David Thoreau.
Throw in a number of his contemporaries -- Ralph Waldo Emerson, Margaret Fuller and Louisa May Alcott for additional seasoning and you start to get the picture.

Luckily for us the characters in these poems straddle the ages under LeBlanc's nimble thumb, it is as though they exist in the past and the present.  Jean LeBlanc is really a time-travelling magician.

Nothing feels out of place in these poems which is to say that everything feels just right inside the inviting universe that still has Henry David checking out the scenery.

A Local Farmer Remembers His
Encounter With Thoreau

I learn that one farmer, seeing me standing a long time still in the
midst of a pool (I was watching for hylodes), said that it was his father,
who had been drinking some of Pat Haggety's rum, and had lost his
way home.  So, setting out to lead him home, he discovered that it was
I.

"Are you fixing to knock 'em on the head?" I asked him,
remembering the miller's apprentice who,
driven half mad by the baritoning bullfrogs
in the mill race, took an afternoon
to plunge himself into the work of braining
every slimy one. The next day, the miller said,
the man could do no work, but only stare up
at the rafters, smiling, as if entranced with silence.
Inspecting my field one day, the long winter
finally letting go, I see, I think, my father,
who has been known to lose the lane
after a drop or two. As I approach I find it is, instead,
our town misfit, a poet, sailor, mountaineer,
woodsman, scholar, erstwhile teacher,
up to his bony knees in a snow-fed tarn.
It takes me a moment to catch on that it's
the peepers that he's after, though not after,
exactly, just wants to see. My mother, her first year
here from Ireland, was sure it was the Banshees
followed her, I tell him. He says, "This is a vernal pool,
a hint of Eden reappearing every Spring."
I don't quite catch his meaning; I fear he may
be touched. "You'll catch your death,"
I says, and what do you suppose is his reply?
"It will catch us all, anon." And he is lost again
to the peepers. It doesn't signify, but sometimes now
that he is gone, I believe I see him still--see how
that maple sapling looks to be a man, it's there
I see Thoreau, standing stock still, as one who's found
his little hint of Eden, and sees no need to leave.

These poems take you there.  I instantly fell for LeBlanc's conceit as though it were served with hot-buttered popcorn at an afternoon matinee of my youth.

These poems really are a gas.  But, they are far more than simply intellectually amusing, these short novellas disguised as poems have a kindness of spirit to them and share some much needed wisdom, some of it only absorbed after some serious contemplation.  Jean LeBlanc brings Thoreau to life with dignified authority and Yoda wit.

I doubt if Emerson could trundle a wheelbarrow through the
streets, because it would be out of character.  One needs to have a
comprehensive character.

One needs to know how to build with stone, how to swing
an axe, how to keep tools sharp.

One needs to know the apple tree, with its mealy fruit,
is left standing for the hummingbirds in spring, and for shade.

One needs to know vermilion red from scarlet lake.

One needs an ear for the robin's song, at dusk.

One needs a strong back, to stand still and listen. We listen
with our backs.

One needs a love for one's children, so that when they shine,
we are warmed by their shining, and when they fail
at some small thing, we can help them see the smallness of it.

One needs to see the connection between
the robin's evening song and one's children,
the gentle sadness, the summing up of a season

in each rising, falling run of notes.

Skating in Concord is all about character.  Jean LeBlanc takes all the character in her part of the world and jams it into these poems.  Her poems are portraits that honour the character of the characters in them.  These poems are so lovingly rendered you might almost think she were writing about her own children and not her heroes.

And if someone happens to pick up a copy of Walden or Emerson's essay Nature as a result of Skating in Concord, that's a good thing.  It won't hurt you a bit.

The morning wind forever blows, the poem of creation is uninterrupted;
but few are the ears that hear it.

Shoebox from my mother's closet.
A mirror for the pond itself, pilfered
from the compact in my mother's purse.
Pipe cleaners from my father's desk,
magic-markered green, twisted into pines,
stuck down into styrofoam; styrofoam glued
to cardboard. To the back of the box,
next to the mirror, construction paper facade
of a cabin, triangle atop rectangle.
Thoreau himself, in front of the cabin,
a dun-colored plastic soldier that my brother
will never miss. What to do
about the rifle he holds? Ah!
A little folded square of paper,
taped to the tip - an axe!
Cradled like a baby in my arms
on the treacherous bus ride to school.
Set amongst the other dioramas,
twenty-five little Waldens commemorating
a class trip to the place itself.
But I did not have a mother who kept
her shoes in boxes. My brothers
are not young enough for me to have stolen
their toy soldiers. And while my father did,
at one time, smoke a pipe, well, that's just
not enough to make that all be fact.
But wouldn't it be a perfect story!
That little mirror pond, can't you see it, reflecting
skinny pines, cottonball clouds, Thoreau himself
striding through Walden Woods, my mother
going to touch up her lipstick,
amazed at what isn't there?

LeBlanc's poems are studious and sweet, charged by a deep understanding and compassion for all her time-travelling alter egos.  Skating in Concord is a unique poetic experience that is rewarding on every single page.

LeBlanc does Henry David and his pals proud, might even make them blush.

ABOUT THE AUTHOR
Jean LeBlanc grew up in central Massachusetts and still connects her love for nature and literature to the landscape and history of New England. She now lives and teaches in northwestern New Jersey, returning to her native place via poetry. Her collections include The Haiku Aesthetic: Short Form Poetry as a Study in Craft (Cyberwit.net, 2013) and At Any Moment (Backwaters Press, 2010).

PLEASE NOTE:
We here at TBOP are technically deficient and rely on our bashful Milo to fix everything.  We received notice from Google that we were using "cookies" and that for our readers in Europe there had to be notification of the use of those "cookies.  Please be aware that TBOP may employ the use of some "cookies" (whatever they are) and you should take that into consideration.