Once In The West - Christian Wiman (Farrar, Straus and Giroux) 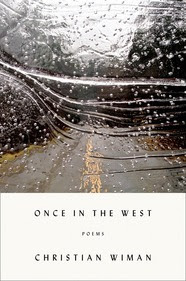 Christian Wiman is firing on all cylinders, Once In The West was named as one of the New York Times' 10 Favourite Poetry Books of 2014.  It was also a finalist for the National Book Critics Award.

Wiman is letting us in on an ongoing conversation, he is stretching open that space where faith and belief intersect and is filling that gap with poems.

There is no proselytizing here, these are not sermons, nor God-mongering pander fests.  Instead, Wiman's Once In The West is a place where he is ironing it all out for his own movie and doing so in vibrant and arresting verse.  We all struggle with what we believe, rarely so boldly or with such pleasantly sad eloquence.

to be exact),
hellbent

on being not
this, not that,

I drove
a steamroller

smack-dab over
a fat black snake.

Up surged a cheer
from men

it would take
a lunatic acuity

as the asphalt
flattening

under all ten tons
of me,

flat as the landscape
I could see

no end of,
flat as the affect

it would take a native
to know was love.

I'm not saying I hear Cormac McCarthy wandering around inside these poems but they do have a dry grit to them.

Christian Wiman explores his own theology without imposing a canon of belief on the reader.

I fear I am misleading you readers, Wiman's Once In The West does not read biblical -- it reads poetical.  These poems are not focused solely on faith or anything close to it, his scope covers a wide panorama yet never veers too far from those big questions.

Too many elegies elevating sadness
to a kind of sad religion:

one wants in the end just once to befriend
one's own loneliness,

to make of the ache of inwardness --

or ever just believing in it,
and summer,

and the long room alone
where the child

chances on a bee
banging against the glass

The reader will be forgiven for thinking Christian Wiman is some old jazzcat Mark Twain/Will Rogers because that is how he grabs you, with old unassailable wisdom, that is how he takes root. These poems come on you all quiet and reverent until you hear that whip snap.  Today's book of poetry always appreciates smart and Once In The West is all over that.

I have forgotten the little killing ditty
whispered to the red birds and the blue birds and the brown birds
not one of which I ever thought to give a name.

In the tall mesquite mistaking our yard
for a spacious place, I plugged away with my pellet gun
and got them often even in the eye, for I was trained

to my craft by primordial boredom
and I suppose some generic, genetic rage
I seem to have learned to quell, or kill.

much more difficult now because they moved
--not me, frozen as if in a camera's flash--
troubling the tyranny of the ordinary

as if a wave of meaning or unmeaning
went rippling like heart through the yard.
Fire and fire and they fell and they fall, hard.

I felt nothing, and I will not betray those days
if days are capable of being betrayed,
by pretending a pang in my larval heart

or even some starveling joy when Tuffy yelped.
I took aim at the things I could not name.
And the ditty helped.

We have no faith here at Today's book of poetry but we admire good poetry and Christian Wiman's wit and fervent questions make for wildly entertaining reading.

I lied a little earlier, there is a sermon, an anti-sermon entitled "The Preacher Addresses The Seminarians" and it is a tidy little ditty.

ABOUT THE AUTHOR
Christian Wiman is the author of seven previous books, including a memoir,My Bright Abyss: Meditation of a Modern Believer (FSG, 2013); Every Riven Thing (FSG, 2010), winner of the Ambassador Book Award in poetry; and Stolen Air: Selected Poems of Osip Mandelstam. From 2003 to 2013, he was the editor of Poetry magazine. He currently teaches religion and literature at the Yale Institute of Sacred Music and Yale Divinity School. He lives in Connecticut.

BLURBS
By turns elegiac, brooding and funny, Once in the West is one of the very few American poetry books to deal seriously (and successfully) with the religious impulse.
- David Orr, The New York Times Book Review

Once in the West is Mr. Wiman's fourth book of poems, and his best. While reading it, I was reminded of something John Updike said about the theologian Karl Barth. 'Really, Barth's mind, so invariably earnest, always penetrates to some depth tonic for me,' Updike wrote. 'He makes me feel that rare thing, with authors, called love--one loves a man for thinking and writing so well.' Mr. Wiman is only rarely earnest in his new book, but at times his writing made me feel something similar.
- Dwight Garner, The New York Times

As Wiman puts it, there are church-curdled hymns, gear grinding tenors and here and there, that rapt, famished look that leaps from person to person, year-to-year like a holy flu. . . Amid lonely and painful landscapes, he's mixed terse speech and lyric leaps to record unpredictable dialogues between body and soul. To be sure, there's a lot of ugly sadness in these poems - cheerless men or, as he says, cancer on a slow boil in the bones of a woman who sleeps five feet from the widescreen. But there's also a raw bareback grabbing at joy. Even in the grittiest spots, Wiman has got a knack for sounding metaphysical. Like the percolator described in one poem, these verses hold and withhold. They speak to the need - as Wiman puts it - to befriend one's own loneliness, to make of the ache of inwardness something - music, maybe. And they speak to the improbable places we're unaccountably called to love. For what does the chigger-bit and muddy-buttocked body of a former lover teach us about how to live? Can it be tragedy, asks Wiman in one poem. But here, there's such fervent prayer to exist - to know. In that raw hunger, we feel the redemption too.
- Tess Taylor, National Public Radio

Wiman's book confronts illness, loneliness, doubt, economic hardship and aging, as well as the suddenness of death, which makes no accommodation for young or old. . . This complicated attitude shapes the spiritual questioning in the book, resulting in such striking and roguish lines as these, 'Sunday zombies // chewing chewing our little cuds of God,' and, 'We lived in the long intolerable called God.' . . . The songs are not plaintive. There is too much edge to the voice for that. Wiman's penchant for crafting novel compound words adds another obvious musical quality to the poems. Unique verbal constructions, like 'everair,' 'laughteryawn,' 'quicklicks,' and 'razormusic,' appear in the book as poetic turns of phrase that indulge in the resonant sounds of words. However, these compound words, like kennings in Old English poetry, are jettisoned beyond music to the metaphorical evocations of such combinations. Wiman's poems sing to us in the face of uncertainty, urging us towards our task through song.
- Paul Otremba, Houston Chronicle

The speakers and people populating Christian Wiman's Once in the West suffer the loss of lovers, childhood friends, family, and even a landscape made nostalgic by time and distance (West Texas), but Wiman offers more than lines of longing and absence: he looks at his own mortality, the pain rising from all gradations of unknowns and imminence, and then subverts the elegiac from memorial to electricity. . . Throughout Wiman's work, in both his poetry and prose, mortality confronts art, the human condition of limitation and finitude challenging aestheticism. And vice versa; art confronts our condition. This poem especially, but throughout Once in the West, Wiman embraces loneliness, that nuisance we seemingly always want to reject, dismiss, even annihilate. . . Once in the West is populated by noise, chaos, things that recede and undulate. There is fire, burning, dawning, electricity, climbing--constant movement, though it isn't always linear, momentous, or climatic. Religion is a system straining against this chaos; and Wiman fights religion and its failure to answer its own silence.
- Caitlin MacKenzie, The Rumpus

In his fourth poetry collection, Once in the West, Wiman explores the 'hard horizonless country' of his West Texas roots, his religion, his family and the joy of being alive. Here, [Wiman] proves himself to be a writer who can show us the world poetically from a metaphysical, mystical, religious viewpoint. His poetry can sustain, lift up, support--it is sustenance for the soul . . . His is an intense, intimate poetry, employing surprising meter, rhyme and word juxtaposition to share ideas, opinions and memories. . . Wiman's poetry shows us how to experience and confront the fear of death, and the sustenance of a faith in something greater.
- Tom Lavoie, Shelf Awareness

The first half or so of this harsh and sometimes masterful fourth outing from poet, memoirist, and editor Wiman (Every Riven Thing) might represent the best verse he has yet penned . . . A former editor of Poetry magazine, Wiman's wide reading there perhaps helped him develop his serious, careful, and widely admired technique . . . These poems of anger and devotion . . . [are] part of a serious poet's lifelong thought about life and death, about body and soul, about memory and family, about this world and what is beyond.
- Publishers Weekly


Christian Wiman, former editor of Poetry magazine and now lecturer in religion and literature at Yale Divinity School and the Yale Institute of Sacred Music, offers further evidence that his voice is among the most compelling in contemporary poetry. . .These poems are filled with delightful language play, with coined words that are just about perfect, and lyrical flights that make the reader stop and pronounce them aloud.
- Jill Peláez Baumgaertner, Christian Century
If Once in the West were a painting it would be expressionistic, gestural, smeared with primary colour and inky black. In effect it is heart-wrenching.
- Beverley Bie Brahic, The Times Literary Supplement

Poems cited here are assumed to be under copyright by the poet and/or publisher.  They are shown here for publicity and review purposes.  For any other kind of re-use of these poems, please contact the listed publishers for permission.
Posted by Today's book of poetry at 7:23 AM