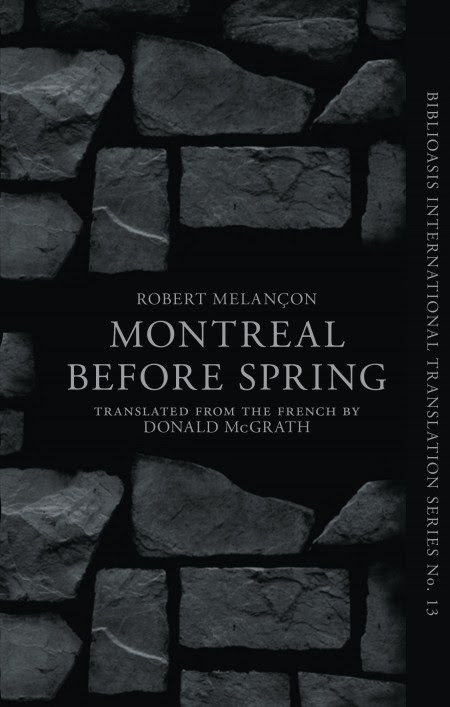 And there it is.  We're not suggesting that there is much similarity in voice or style - but Melancon, like Birney, knows everything under the sun and is a gentleman about sharing it.

Montreal Before Spring is an occasional weather report, both literally and figuratively.  Melancon is taking and talking the temperature of Montreal at the same time as he is celebrating the city.  And the citizens.

Sunset, noise of cars,
and all those people
rushing everywhere
at once; delightful
just the way it is!
The mixed aromas,
the shifting colours,
street signs and the air
you drink in, having
so little else to do.

So delightful! Night
unfolds its banners
between the buildings,
the far horizon
reddens, turns coal black.

You go forth, drunk on
the multitudes, drunk
on everything, while
the lampposts sprinkle
nodding streets with stars.

Melancon sees the big and the small and treats them with equal respect and curiosity.  There is a lovely, long letter/poem to the Canadian poet George Johnston that is filled with admiration for Johnston's writing, both his poetry and his handwriting.  That's no joke, a handwritten note from Johnston looks like it was laboured down onto velum by some very devout monks.  I like this.  I like this celebration of friendship and craft.  Melancon does it again with a laudatory epistle to/about Jean-Aubert Loranger (one of Canada's first modernist poets).  These meditations on friendship give us a good look into the poetic heart of a soulful man.

A Voice Heard In A Dream,
Upon Awakening

"Your days will pass, one by one,
words in a breathless sentence strung
together without punctuation, your actions,
those thoughts that come as such a cost,
won't follow you, but if they do
it will be as perpetually vain regrets, little
will it matter, very little, whether you
betray or remain faithful, because each will
come to you in turn, everything will
be lost as if you'd been dreaming, it's like
a dream, the disorder of an old man's life
that comes back at the end, you'll descend
into lower depths you don't suspect are there,
you'll be seized, at times, by an unfathomable joy
before the expanse that evening will open up
where the streets run out; impassive, the world
will continue on its course, flowers
that will fade in autumn will come, snow
that will melt like snow in the sun, each day
will bring with it the History you'll throw out
with the newspaper, with your boredom, you'll
have friendships that you'll lose, love you'll see
falling away from you, that you'll try
in vain to hold on to, everything will be
given to you, everything taken away,
everything will come, everything pass away
like this night I've pulled you from, now go."

Today's book of poetry hear's A.M. Klien, Raymond Souster, Louis Dudek, St. Leonard of Cohen, Irving-King of Layton in these poems along with a host of other giants.  Today's book of poetry is embarrassed to admit our knowledge of French language poetry from Quebec is sadly uninformed. Melancon's Montreal Before Spring is a welcome introduction (for this reader) to another fine Canadian writer.

Robert Melancon's poetry has moments full of playful vigour, there is never any pious posturing but there are deeply meditative philosophical questions along the way, baked into the cake, under that sweet icing.  He deals with big issues before you know he's on to them and while you contemplate that Melancon reflects on the angle of the sun setting over Montreal rooftops.

This sky, grey as your eyes.
The endless snow. The day
seems to have stopped.

Your arms wind round me, I don't
even have to close my eyes
to believe that you are here.

I look out at the afternoon,
as idle as a man lost
in his thoughts. The clouds

stretch out. The air
wraps around itself. The whole city's
an alcove where I go to meet you.

There is a great tenderness in these poems.  TBOP loves that.

ABOUT THE AUTHOR
Robert Melançon is one of Quebec’s most original poets. He won the Governor General’s Award for Poetry for his collection Blind Painting and shared the Governor General’s Award for Translation with Charlotte Melançon for their French version of A.M. Klein’s The Second Scroll. A long-time translator of Canadian poet Earle Birney, Melançon has been the poetry columnist for the Montreal newspaper Le Devoir and the Radio-Canada program En Toutes Lettres. He lives in North Hatley, in Quebec’s Eastern Townships.

ABOUT THE TRANSLATOR
Donald McGrath grew up in a fishing village on the Avalon Peninsula of Newfoundland and moved away from the island at the age of nineteen to study art at the Nova Scotia College of Art and Design. He has been a longshoreman, factory worker and waiter, and currently works as a translator in Montreal, where he has lived for the past twenty-five years. He has published in periodicals and reviews in Canada, Australia and the UK, and is the author of one previous poetry collection, At First Light (1995).

You can see a TBOP blog about Donald McGrath's poetry here:  http://michaeldennispoet.blogspot.ca/2014/06/the-port-inventory-donald-mcgrath.html

BLURBS
“Poetry, in Melançon’s hands, is a way of seeing.”

"Melancon's work is rich and deceptively simple."
-- Globe and Mail