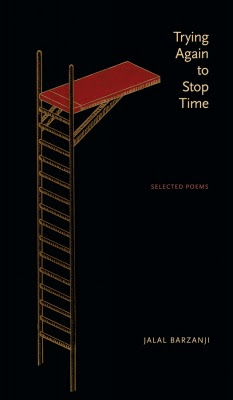 We all know how life is simply not fair, not for a second.  You only have to turn on the news to see the world in despair.  In this 21st century people are still being displaced from their homes for geopolitical/racial reasons.  What insanity is this?

Today's book of poetry believes that poetry connects us, makes us more human.

Today's book of poetry, Trying Again to Stop Time by Jalal Barzanji, is translated from the original Kurdish.  Barzanji has been part of an oppressed minority in his own country, an exile, a refugee and an immigrant.  Now living in Canada his voice broadens the scope with which we see the world and we are the better for it.  These poems, reprinted from Barzanji's previous collections and with the addition of three newer poems, chronicle his life and journey.

Home in a Suitcase

Thanks to the sea,
the journey from Istanbul
to Edmonton
is a seventeen-hour flight.
A day earlier,
a thirteen-hour bus ride
brought us to Istanbul's Ataturk Airport.
It felt good to say goodbye to Sivas-
the city was too conservative for our taste.
The airport was teeming with refugees like us:
some sleeping,
some reflecting,
some looking up words
they thought they needed upon arrival in a foreign land,
some busying themselves with their hats,
some pondering the possibility of failure and disappointment,
some missing home,
some staring at their new lives in suitcases.

Some six months before,
we left Ankara for Sivas.
Nine months earlier,
in the midst of the Kurdish civil war,
I fled to Ankara,
where luck turned out to be on my side:
I was accepted by the U N as a refugee.
For six months
in the Ols district,
the hub of refugees from Southern Kurdistan,
I was Teza's tenant.
Every morning,
Sungul and I
climbed down 122 concrete steps
to go to the local bazaar:
Sungul sold ice water,
I reflected on what was to come.
I am not a storyteller,
though I do keep a lot in my heart.

In 1961,
at the start of the September Revolution,
Iraqi warplanes bombed our village.
For several weeks
the nearby caves were our home.
Mother missed her vegetable garden;
she knew it wouldn't survive under the rubble.
Father lost the few sheep he cared so much about.
And I lost a woollen ball I had made myself.

My first time flying
I was unafraid:
I had complete faith in my kite's wings.
The second time,
I flew from Ankara to Kiev
on a fake visa,
hoping to be smuggled to Sweden.
The venture failed;
I was caught
and sent back to Istanbul
on a half-empty flight.

My children weren't afraid of flying;
the plane going up and down was like a seesaw for them.
For my wife,
flying above the rain, the crowds, the city
was hard to believe.
In Amsterdam,
U N bags in hand,
we stood for six hours near the gate.
Getting lost was our biggest fear.
But I did manage to call Hawler.
I don't remember much else from Amsterdam.
Crossing the Atlantic
made me realize we were still without an address.

By illuminating his world of exile Barzanji shines a light on the whole world.  His poems are witness and journey.

Canada is home to many voices and there is plenty of room for more.  Jalal Barzanji's Trying Again to Stop Time is a Rahsaan Roland Kirk beautiful shriek.  These tender, searching poems are not jazz, that's not what I meant - they are heart bound echoes, human song, passionate and persuasive.  That was Kirk all day long.

The women of my country
have become inseparable from the cemetery.
The keys were poisonous:
poison above,
poison below,
poison in the blood,
poison in the imagination.
We were small to begin with;
now we've become even smaller,
and more confused.

My country,
war has left you without gardens.
The young are jumping to their deaths.
The old are too old for walking sticks.
Your doors are always open,
but your windows are always shut.
There was a time when people grew wheat
built beautiful homes
went to the mountains
made music
organized festivals
and eliminated bad odours.

To exile,
we take with us
two eyes, one heart, and one soul.
When we return
we bring back thousands of eyes and thousands of hearts,
but we return with deeply troubled souls.
We plant trees in exile;
we socialize,
but only loneliness filters through our imagination.
Still, I must say hello to exile.

Barzanji has a surprisingly light touch considering the depths he is mining, it surprises the reader again and again.  The poems in Trying Again to Stop Time are connected to the natural world by a gossamer thread, there is a quiet solitude in Barzanji's exile but that doesn't translate into his being schtump.

Trying Again to Stop Time quieted things down in our office.  It creates its' own space for reflection.

Where Am I?
Fourteen years in this country,
in the same neighbourhood,
and I still don't know where I belong.
With my next door neighbour on the right,
I have yet to exchange a word;
with my other neighbour, I do talk,
but no more than three times a year.
If it's summer and the sun is out,
we say, "It's a nice day."
If it's winter,
while shovelling the snow,
we say: "It's snow again."
and then just before the year is over,
he leaving,
I returning,
we exchange a few more words.

Jalal Barzanji's story is a familiar one but it is not often shared, rendered into art.  These poems shine.

ABOUT THE AUTHOR
Jalal Barzanji is a highly respected Kurdish poet and journalist. He has published seven books of poetry and numerous critical columns. After his two-year imprisonment by Saddam Hussein’s regime in the late 1980s and further political repression into the 1990s, Barzanji and his family fled to Turkey. They remained there for eleven months, eventually immigrating to Canada.

BLURBS
“Like contemporary poets Taslima Nasrin, Adonis, Yehuda Amichai, and Shuntaro Tanikawa, Barzanji’s is a voice in which the native willingly mutates into the global.”
— Sabah A. Salih, Translator

“The Kurdish question stands tall in our age as yet another emblematic paradigm of the violence enacted on a people in the name of the nation-state. Barzanji’s poetry is lovely, with frequent piercing tender moments and visions of the daily and the ordinary. The translation reads smoothly and naturally, highlighting the spoken quality of the poems, the loving and wounded quality of their speaker.”
— Fady Joudah, translator of Ghassan Zaqtan's Like a Straw Bird It Follows Me, and Other                     Poems, winner of the 2013 International Griffin Poetry Prize

We here at TBOP are technically deficient and rely on our bashful Milo to fix everything.  We received notice from Google that we were using "cookies"
and that for our readers in Europe there had to be notification of the use of those "cookies.  Please be aware that TBOP may employ the use of some "cookies" (whatever they are) and you should take that into consideration.
Posted by Today's book of poetry at 6:59 AM