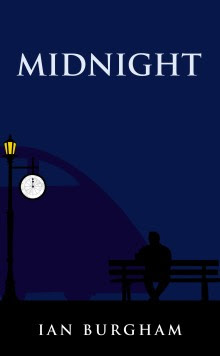 For those readers who like to dip their toes into other people's misery, Midnight is your huckleberry. Ian Burgham doesn't pull any punches, he lets us know his agenda right from the start.  Here's a stone-cold killer line from his poem "Istanbul":

The dead let us know we are here for a reason.

Burgham is sure the dead talk to us all the time and mostly it is the sad litany of the dirt sleep. But Burgham is telling us pretty.  Midnight bursts with one beautifully desolate travelogue after another.
Today's book of poetry loves the sad clarity of these heroic poems.

We know how most of these stories end but the marvel is how tasty Burgham makes the cruelty of inevitability.

I wrote her lies last night.
But tonight?
Tonight knocks against windows
while I write myself into resignation
through a long sleepless dark.
The moon's melted like a Dali watch.
The stars hang lanterns in the heavens
and I live nowhere but within extreme silence
which unfolds and flowers,
then unfolds, and unfolds again.
Under the spice trees I feel lost to time --
to the fading idea of her.

I'm a foreigner sitting arm's-length from a conspiracy
of black-clothed, tobacco-stained moustached old fishermen,
drinking, staring into the small seas of their coffee cups
and mourning how it all goes so wrong;
an acceptance of this as future,
weariness in their chipped and broken seashell faces
from the twisted notion of having tried to do one's best --
ancient failures lit by the glow of hand-rolled Turkish cigarettes.
Sometimes coughs from congested lungs.
Sometimes a short burst of laughter
followed by a nervous clearing of the throat.

Why is it that those we love hurt us most?  Burgham doesn't attempt to answer as much as he tries to work out space for compassion.  We are all headed down the same road to the same destiny and Midnight reaffirms this on every page.

Yes, the house outlived him --
but he's here on our tongues nevertheless.
The walls taste of him.
Perhaps he left to make that new start --
that elemental cleansing move we all dream.
Or maybe he grew tired of the comforts and,
breathing losses, simply left one day.

Perhaps he sold the house to retire and die --
or, tired of a theft of life's promise,
took up residence elsewhere,
then prepared to leave that place too,
knowing that by moving on,
something good might come -- maybe some company,
a passing stranger would turn up,
reduce the distance between them
and become a friend?
Or perhaps in the inventions of his future
he was not much good at being happy --
just good at the sadness
the black dog of last days brings
as a slap across the head?

After time, mail is never forwarded.
The postman stops delivering --
and that puts an end to all.

Why on earth would anyone here at Today's book of poetry be totally enthralled with these dark and somber poems?  Of course you all know Milo, resident technician and the last of the true Gothpunkblackheartmetalheads, he's been running around the office all morning showing off his new "DESOLATION" tattoo and dancing with Burgham's Midnight in his greasy paws.  "Best love letters I've ever read, best dark heart!"  At least I think that's what he is muttering.  With Milo it is often hard to tell.

Myself, I loved the foot on the gas feel of these poems.  No prisoners.  Burgham takes on Al Purdy, invokes Pablo Neruda and travels to the four corners of the earth to bring us his sad tales of a search for the end to love.  The thinking here is that it is a search for a new beginning and you can't be any more optimistic than that.  Even covered by all that dark.

The Sisters of Crucifixion
Dublin

The sisters pray between the world and its maker,
choosing to avoid the weaving of a history
with the dwindling threads of the limits and dreams of our time,
wearing short skirts and high heels under their habits.
They are in a sense dead.
If there is a moment to slip hard thought under their scapulae,
with permission and desire, I'll practice the sweet art
of blasphemy as all poets do.
My philosophy is change,
my weapon is corrosive thought.

We are subversives,
birds who pare our beaks
on the stone of the tomb.
We make poems from secrets disentangled from our lives.

Ian Burgham gets his hooks into the reader early on and doesn't let go.  Good on him.  Midnight is fierce intelligence and intense emotion hitting that black wall.  This is romantic realism and pragmatic confessional, rue and regret with considerable gravity.

I'll leave the last words to Burgham, TBOP loves the way this man talks, this is the last verse of the last poem in the collection, "Journey's End":

Can we agree to this?
Kiss me because we have been loved,
and are forgotten.
time is our end
and within that end there's only joy and wonder and a poem,
that great run of incendiary words. 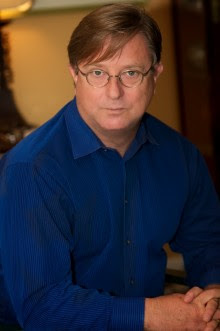 ABOUT THE AUTHOR
Ian Burgham is the author of three highly acclaimed poetry collections: A Confession of Birds (MacLean Dubois), The Stone Skippers (Tightrope Books), and The Grammar of Distance (Tightrope Books). Burgham was awarded the Queen’s University Poetry Award, and nominated for the Relit Award forThe Stone Skippers. His work has appeared in many literary journals, including The Literary Review of Canada, Dalhousie Review, Queen’s Quarterly, Journal of the Poet’s Union of Australia, The New Quarterly, Prairie Fire, Antigonish Review and others.

BLURBS
"Ian Burgham's poetry is highly evocative, thoughtful and at times haunting. His range is a wide one, moving from recollected personal moments to more general reactions to nature and the human world... In this collection we see him at his best, demonstrating once more that he is one of the finest poets writing in Canada."
- Alexander McCall Smith

"The thrust of this collection, in its amplitude, is Byronic if not Homeric. Ian Burgham's grasp is equal to his reach, and his reach encompasses the globe with flying, eye-catching images. Seven league boots would hobble the free flight of these memorable verses."
- Howard Engel

We here at TBOP are technically deficient and rely on our bashful Milo to fix everything.  We received notice from Google that we were using "cookies"
and that for our readers in Europe there had to be notification of the use of those "cookies.  Please be aware that TBOP may employ the use of some "cookies" (whatever they are) and you should take that into consideration.
Posted by Today's book of poetry at 5:57 AM