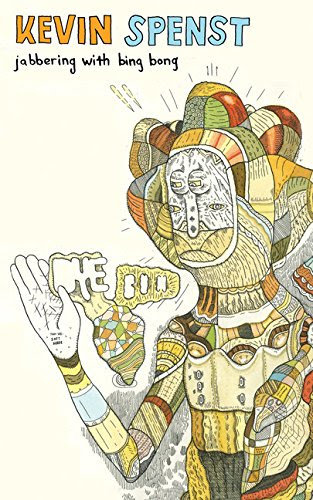 Crystal Gayle is whisper-crooning the Tom Waits' classic "Take Me Home" and the lake is as quiet and still as bathwater in an bathtub. I've sent the entire staff off on a scavenger hunt into the woods with at least three impossible tasks.  I expect them to be gone for hours.

Most likely they will find a quiet spot, sit and smoke bobo, tell each other lies.

Kevin Spenst's Jabbering with bing bong is a little like Crystal Gayle singing Tom Waits.  A beautiful clash-turn-cascade of juxtaposing cultures.  Spenst has that distinct voice we recognize on first hearing, like Waits, like Gayle, unique and hauntingly familiar.

At sixteen, I folded into prayer for the last back-
and-forth time in my basement bedroom with
one brick wall, and cheap wood siding
and a box-filled fireplace. It was midnight.
The cement floor, covered in carpet scraps,
was equally unseen and cold. The brick wall
stopped halfway, continuing as a ledge of its
lower self, a makeshift closet. An opening at
the end led you under musty clothes toward
a wooden door with a metal latch to a crawl
space under the stairs. A history of fear, of play.
Despite the darkness, my eyes were closed.
I can no longer believe in you, I prayed in bed,
If I'm wrong, I hope I find my way back.

These crisp missives chirp, chortle and chide and in no time at all Spenst has taken us around an unexpected corner.  Spenst has a strangle hold on contemporary culture and the reader tied in knots with these dense little sausages packed to bursting with poetic meat.  These poems have a great sense of wondrous play that disguise the shot to the brain Spenst has just knuckle-balled your way.  He gains quick and slick access to the part of our brains that love poetry.

Jabbering with bing bong, although laced with as much sadness and uncertainty as anyone need carry, brims with poems that will make your brain happy.  You are going to be pleased you paid the price of admission for this show.

A Brief History of Lust

Fenris Wolf Esquire beds little Red,
colonizes her limbs
in a cherry bowl motel room
rented by the century. Whispers,
is Red your real name? Whispers,
I only feel at home inside you.

Fenris Wolf drops in about half-way through Jabbering with bing bong.  He snorts and cockwalks through several excellent poems.  He caterwauls and smells like sex but he doesn't hang around for long.  Too bad.

If there were ever a sequel to Jabbering..., Today's book of poetry would like to hear more about the big, bad Wolf.

This reader is sad to see the Wolf go.

On we go into the back half of Jabbering with bing bong (which is a GREAT title), and it is delightful.  Spenst dances over these quirkily terrained poem scapes as though he had an extra set of legs.  These poems are so bursting full of ideas that you hardly have time to digest one train of thought before another comes screaming into the station.

Jabbering with bing bong is full of literary characters, you never know when John Berryman might drunkenly jump from a bridge, or Margaret Atwood opine robustly.  Wallace Stevens and Milton Acorn, Al Purdy and, well.  You catch the drift.  But Spenst doesn't just name drop, he uses the aura and glow from each of these giants to make them all welcome, necessary.

Even under the real mask of bipolar disorder
Halloween is a bad time to kill yourself: an
awkward costume, a shroud of ugly absence.
Earth holds more dead weight. Soggy cardboard
tombstones line the house next door. Anger
lurks behind ghouls at our front door. What we
must offer you is love. You hammered out
the personal into concave dusks, listening spaces
you opened with a tilted head for writing students
and friends. Your ex will go to San Francisco
for eleven days. I wish her warmth. We walk
with heaviness as if gravity has increased.
Saint Suicide, we pray that yours will be
the last. Suspend our disbelief forevermore.

Today's book of poetry is smart enough to trick his minions into the woods for the morning but not smart enough to adequately express the wonder and playfulness of these acid-etched songs.  Kevin Spenst has just made a place for himself at the table,  Jabbering with bing bong is first class jabbering of the highest order.  The best jabbering you'll see for a while. 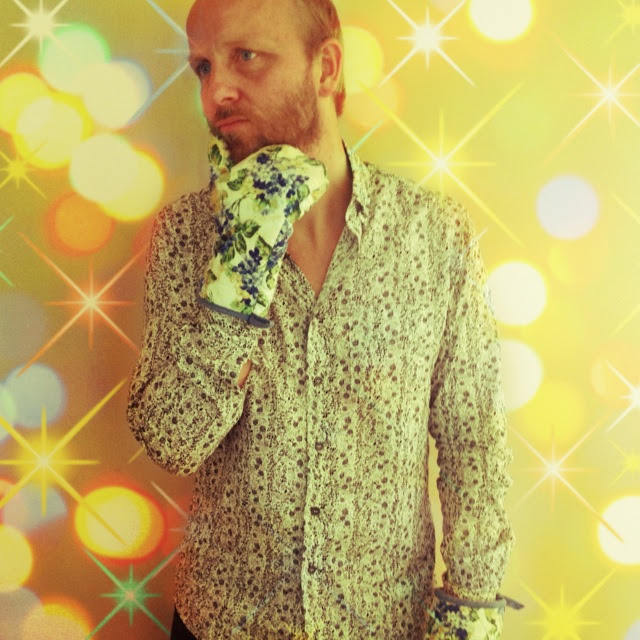 ABOUT THE AUTHOR
In addition to the UK, the United States, Austria and India, Kevin Spenst’s poetry has appeared in over a dozen Canadian literary publications. In the spring of 2014 Kevin did a 100-venue reading tour of Canada in support of small poetry presses with his chapbooks Pray Goodbye; Retractable; Happy Hollow and the Surrey Suite; What the Frag Meant and Surrey Sonnets.


BLURBS
“Belief and disbelief rub up against each other in this startling and flawless debut collection. … These important poems do not redeem so much as allow the possibility of redemption.”
—Jen Currin, author of The Inquisition Yours

“Fearless, attentively probing, and sonically sharp, he is a rare counter-theosophist rhapsodist. Spenst’s Jabbering…is the work of a remarkable shepherd.”
—Sandra Ridley, author of The Counting House


“Kevin Spenst provides further proof that the best writing these days is in the practice of poetry. Hang on tight as you are winged deftly through the human strains…curiosity, sexuality, death, religion and striving—it’s all here.”
—Dennis E. Bolen, author of Black Liquor

Kevin Spenst
Reading at the Human Bean in Cobourg, Ontario
as part of his 100-Chapbook Tour across Canada
Video:  Wally Keeler