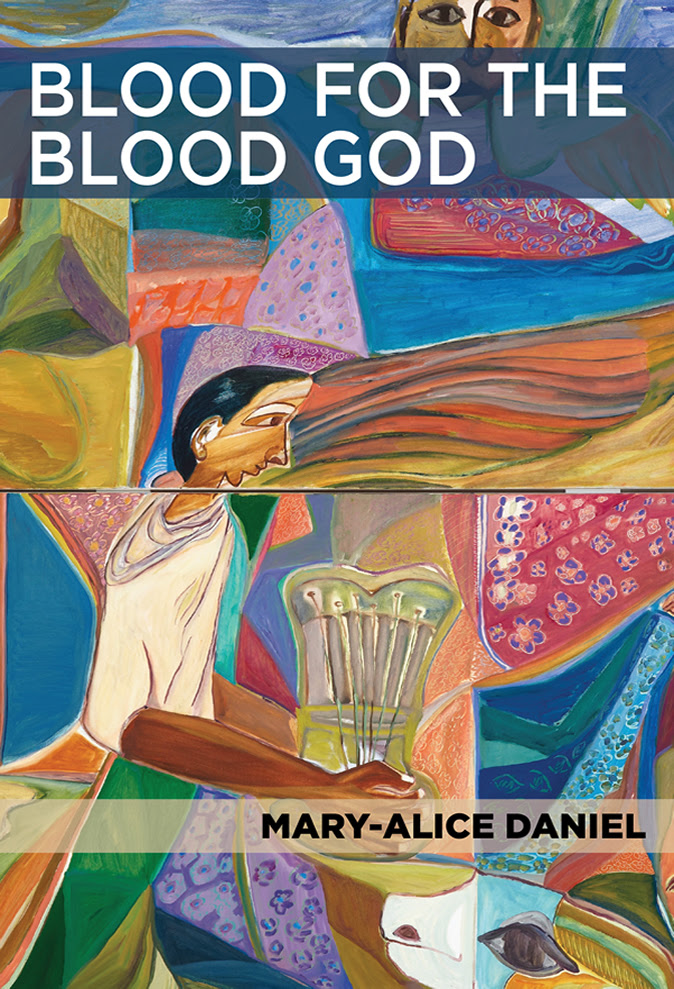 Mathew Shenoda's illuminating preface to Mary-Alice Daniel's Blood for the Blood God suggests that her poems use an "internalized" voice and speak in an "ethereal" language but Today's book of poetry is convinced that Mary-Alice Daniel has an international voice, one that breaks down boundaries.  I know because it reaches all the way back to Maiduguri, Nigeria, where Daniel was born.  But that is a flash point starting place on the grid because Daniel's spent time in London, England, she spent time in Nashville, Tennessee.  This strong, strong voice went to Yale.

Mary-Alice Daniel is a rare find.  She's lived where we live and knows what we know.  But she has other knowledge that lingers, she knows things we don't know, the history of another continent as a birthright and all this globetrotting helps to create a voice that we should want to hear.

Blood for the Blood God

You can do to a body a lot of things,
A feature in Smithsonian on cannibals makes me hungry.

I'm learning so much--they use bodies as ritual snacks,
eating everything but teeth, hair, and penis.

(Toenails as pills for stomachache.)

You can view bodies with aequanimitas--that clinical practice--
emotional distancing, as of a doctor:

humans otherwise caught in a net of cable wires,
humans assimilated into the larger borg.

Or you can want them put down.
Eliminate 350,000 bodies a year to reach optimum population:

If they assume the fetal position,
they can be slaughtered in orderly fashion.

You can make pain principles out of anything: unripe papaya.
You can pickle a man in a five-foot-tall glass jar.

Take more men on field trips over battlefields
as melancholy meat: silhouettes of the national scene.

You can explain the disappearance of a people by making myth--
say that conquistadors stacked bodies,

then poured cement of top, built them into houses--
thumbed their noses at haunting and good engineering.

Now zip things in and out of a body
surgically like a Sunday purse.

This is the best way, the only natural way:
in anger, in heat. One lonely cannibal,

so upset by his wife's truancy,
twice burned down his own tree house.

Mary-Alice Daniel talks about nightmares in these poems.  She instructs us that the five most common types of nightmares are:

Today's book of poetry has had a taste of all those old standbys with the exception of the "tooth falling out."  Considering the atrocious dental care of my youth and all my missing teeth along with my propensity for nightmares you'd think it would top the list.  Nope, for Today's book of poetry it's all about the chase dream.  All night long.  I try to physically run out of our bed in my sleep, scream when the blankets restrain me.  Mary-Alice has it right from the start when she says "dream-logic won't save you."  Daniel hits the proverbial nail on the head with aplomb when she refers to us human beans as "long pigs."

Mary-Alice Daniel has a vice-grip view on the human spectacle and these poems throb with it.  On first read you might conclude that these poems are looking for new spaces for their emotional light to blossom, new places to spread out.  Today's book of poetry would argue that the only additional space needed by Mary-Alice is a bigger book.  Blood for the Blood God is ample proof that there is more to this voice that can be contained in a chapbook.  This is taut and tasty and tight poetry.

1.     If he dies during the Month of Brides it is a great shame.
2.     Wash the body 3 or 5 or 7 times--Never 2 or 4 or 6 times.
3.     We see Allah rearranging candlesticks in the starry hall of heavens,
creating spectral shapes, undoing them
and remixing the music of the situation,
in widening circles containing us in these compulsions,
as He wonders which fires He has left unextinguished.
4.     Who commits to us these instructions?
Your heavenly blameless Father,
His prophets and your earthly fathers:
superstitions and blind notions.
5.     Welcome all to the funeral: Buddhists, followers after Christ,
those who believe in Chang'e, that lady in the moon
who sweeps her vast cold place all alone.
6.     Remember the small black dogs your mother dreamt devoured
each other in play near the incense pit, and know:
if there are night visions, there are mystical visions.
There must be a heaven, gods' birthplace--
therein resides Allah.
7.     The face must point toward the House of God in Mecca:
the living always walk beside or in front of death.
8.     Into the grave, place no object!
9.     Avoid burial at sunrise, high noon, and sunset.
10.   Allow neither music nor emotional outburst,
for though we surrender our dead to the earth,
forward from it
we shall bring them
once again.

The procedure described above is the only correct one.
To Him do we belong and unto Him is our return.

When we got around to the reading part we took our usual turns with Mary-Alice Daniel's Blood for the Blood God.  Otis, our translator, dropped by this morning and translated one of Mary-Alice's poems to Farsi and then read that version to us.  It sounded perfect, and really, how would we know otherwise.  But music is always music.

Mary-Alice Daniel writes intimate poems that span continents and belief, and she does it with grace.  Today's book of poetry can only wait for a full-length collection from a voice this smart and true.

ABOUT THE AUTHOR
“Mary-Alice Daniel was born in Maiduguri, Nigeria—birthplace of Boko Haram, the terrorist group that specializes in kidnapping the girl child. She was raised in Hausaland and in England. Since adolescence, she has called these places home: Nashville, Maryland, New Haven, Brooklyn, and Detroit. She attended Yale University and was selected by U.S. Poet Laureate Louise Glück to receive the Clapp Fellowship, an award supporting a postgraduate year of poetry composition. She received her MFA in Poetry from the University of Michigan as a Rackham Merit Fellow. Her poems have received three Pushcart Prize nominations and have appeared in American Poetry Review, New England Review, Black Warrior Review, Hayden’s Ferry Review, Callaloo, and several anthologies. Her adopted home is Los Angeles, where she is completing her first full-length poetry manuscript and earning a PhD in Creative Writing and English Literature as an Annenberg Fellow at the University of Southern California.”

BLURB
"To enter into Mary-Alice Daniel's Blood for the Blood God is to embrace a space where time can be suspended or simply conducted in the deeper regions of the imagination, where clocks have no business being. Here it is always night, the past is always present, and there is always a sense of hunger and affliction. We find in her poems a quiet and searing voice intent on reinterpreting the world to create from it a new logic, a logic that seeks, perhaps out of an ultimate desire for healing or redirection, to understand how well humanity has worked to feel the blood god."
- Mathew Shenoda