Today's book of poetry will get to the piercing and subtle workings of Gerald Fleming very shortly - but today we are starting with a note to our readers around the world - thank you.  When Today's book of poetry opened for business this morning we were able to report readers, on line, from Canada and the United States that were in the hundreds, but there were also six from Ukraine and Brazil.  Germany was on line along with France and the United Kingdom.  We had readers from Kenya this morning, and readers from China and readers from Spain.  There are more.

It brings Today's book of poetry much joy.

And so did Gerald Fleming.  He doesn't know it but Gerald Fleming is in the movie business, he just thinks he's writing poems.  These narrative prose poems reel out so cinematic you can almost hear the whirr of the old projector.  One is a series of prose poems where each one is a fully realized scene, or often as not the whole exciting movie, intro, emotional drama, climax, denouement.  Fleming has it all happening in these little documentaries.

I want a clean man, she thought -- a man who bathes, & if not each
day, then, say, four times a week. A man who shaves, but if he's got
a beard then trims that beard, clips those wild hairs from his nose &
ears, a man who won't walk through the house & belch & fart or snort
& spit into the sink like some men do, a man not too clean, of course--
not crazed with it but one who knows that his own clothes are his to
wash -- is this too much to wish for?
Some nights in bed I think that if I had a man like that I'd oil
him -- feet, legs, back, neck -- the way a boy would wax the car he'd just
bought. Grapeseed oil, I'd use -- his thighs like oak, his back like teak,
each arm birch stripped of its bark, I'd sculpt him, my hands traced
into his skin & when he stood my prints would burn in him, stay with
him, seen by no one, but he knows they're there, I know they're there
& when he moves in the world, this clean man, he hear my lips at the
nape of his neck: Come back.

Well that's a movie I want to watch.  Today's book of poetry was interested to see that Fleming isn't just telling the hero's story, the usual movie arc, he's telling the not-so-successful, not necessarily happy ending narrative as well.  The important thing is that these stories feel real.  More real emotionally, more real than your average Bear.

Sometimes these vignettes are looking for joy and sometimes they're swinging low to sorrow's baleful tune but mostly Fleming is surveying the good and bad we do to one another in the service of love.

One sneaks up on the reader with a narrative style that does all of its work under the surface.  There is certain quietude behind Flemings poems but that never tarnishes the knowing timbre of the voice.  Gerald Fleming is entirely without artifice or deceit, his poems belay any gilding.

In high school he picked a fight with a kid he knew he could beat.
What had the kid done? Not a thing. Looked at him.
They met in the back lot when school let out. Big crowd. It was
quick. This to show his friends, of course. Blood on the kid's mouth.
Down the years he thought back to that scene, & when he did he
felt like shit. It wore on him.
He paid a clerk in his law firm to look the man up. He'd moved to
upstate New York.
Wrote him a note: "Not a year has gone by I've not thought of that
day. It makes me feel so bad." Sent the note off, felt a great weight lift.
Two weeks passed, then came the man's note.
"I see that you've not changed a bit."

There is an obviousness to the conclusions readers will draw from One.  Fleming is aiming for the very heart of the matter and wants to know what it means to be a good person.  These clever biopics of the opera of the everyday work because we recognize each and every character Fleming employs.  It's easy enough to do, he is writing about all of us.

Our morning read was brightened considerably by the temporary return of our dear friend Odin.  As usual, he didn't have much to say, walked around the office like he owned the place and/or he was King of the World.  After a short snack he curled up in a big chair and nodded off like he was hit by a hammer.  Had to wake him for the morning read but he faithfully did his part and then returned to his happy slumber in his big chair and his dreaming of poetry loving women.

All Life Long I've Heard Friends Say Death's
Part of Life, But at Last I Think They're Wrong

No: a heart valve bursts or cells go wild, there's a gun-blast or a car
comes wrong way 'round the bed & Death steps in & calls the game.
You can say that life just shifts then--they dig you in, those cells
break down, or you're cooked, half of who you are to rise through the air,
what's left to be sent to two guys with hand-cranks in the back room,
bones ground down & mixed with ash & packed in a box then put into
the hands of your son, who stores them in his loft, thinks of them not
& then as he nears his own end, then one day pours them in some sea
or spreads them at the foot of some elm--sure, part of life, they claim--
but where, I ask, is Death in this?
You did what you could: sought the cure, bathed in light, took your
pills, stayed, tried: weak, short of breath...
Zen friends, say what you like--Life's life, Death's death, & here he
comes--he's out back--look at him, he's on his one-wheeled bike--it's
game-on-the-grass for him, & he wins.

Gerald Fleming's One is a comedian with a short story teller's sense of space and a poet's sense of timing.  He also manages to write from both sides of the fence with gentle diplomacy.

We're convinced that Gerald Fleming is a gentleman, even if he's poet.  This is solid, poetry-thirst quenching stuff. 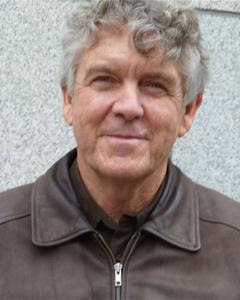 ABOUT THE AUTHOR
Gerald Fleming's most recent books are The Choreographer (Sixteen Rivers Press, San Francisco) and Night of Pure Breathing, prose poems (Hanging Loose). From 1995-2000 he edited and published the literary magazine Barnabe Mountain Review, and is currently editing both the limited-edition vitreous magazine One (More) Glass and The Collected Prose and Poetry of Lawrence Fixel. Fleming taught in the San Francisco public schools for thirty-seven years and has written three books for teachers, including Rain, Steam, and Speed (Jossey-Bass/Wiley). He lives part of the year in Paris.

BLURBS
“Gerald Fleming is a remarkable writer, made more so by his commitment to the prose poem, a form which at its best, as here, is a delicious treat on almost every occasion. His new volume, One, takes on the monosyllable and wrestles it into dizzying and wonderful pretzel-esque works which may appear, at first glance, non-pretzel-esque. You'll probably love this book as much as I do.”
—Frederick Barthelme

“At times wry and wickedly self-aware, these linked prose vignettes deepen into a resonant, searching meditation on that which resides hidden within us-metastatic cells, racism we've spent half our years unlearning, the slow burn of our lives. Fleming's voice is rich with a plainspoken elegance that evokes flickers of Ovid ("the years fled from her face," he writes in elegy) or the quieted mind of a Gerard Manley Hopkins who's made peace with his god and is engaged in the contemplative practice of ordinary life. In this almost-Oulipian project, poet and speaker both gently interrogate language and self, "take each shred down from the line/sew it to the next, soak it in brine/look at it/see that it means in ways we've not known-now finds us, & like us it's scarred now, but still ours-back in our mouths, on our tongues-quick birds!-flung into the air of our time." One is a powerful collection woven of grief, compassion, and the joy of a life well lived. Sidling up against fiction's narrative drive, it's told in a reinvented sprung rhythm sure and steady as a heartbeat, as the beat of one's own footsteps.”
—Miriam Bird Greenberg