Next Door to the Butcher Shop - Rodney DeCroo (Nightwood Editions)

Back in August of this year Today's book of poetry wrote about Rodney DeCroo's Allegheny, BC and you can check that out here:

Today we're looking at DeCroo's recent firecracker from Nightwood Editions, Next Door to the Butcher Shop and let me tell you, the wick is lit.

Who hasn't been drunk and stoned and holed up in a stinky bathroom with the door barred and locked so that your giantly misinformed and closeted giant of a friend won't break it down with further entreaties for sexual demonstrations of affection that may or may not have been earned.  In Rodney DeCroo's world this may be a less unusual event than you think.  These poems are a long way from main street.

Next Door to the Butcher Shop is one hard scrabble motherf**ker.  Things get broken that hurt more than hearts.  This is a world where love comes with bruises whether you can see them or not.  The worst crimes aren't always visible.

By day I stole jeans from department stores
in Thunder Bay and sold them at night
in a booze can with my friend Wayne. We
sat drinking from stubby brown bottles
of High Test, the jeans piled on a chair
next to me bristling with price tags.
Wayne was a large Ojibwa man who used
his size to intimidate customers when they
tried to haggle. He'd stand up to look down
on them. Pay him what he wants or fuck off.

The stranger would stammer an apology
and give me the cash. After they left
we lowered our heads to hide our smiles.
Wayne owned a hair salon and spent his days
giving perms to old ladies who came
to tease and gossip with him. His mother
had been a barmaid and he grew up in the bars
of the oil patch and logging towns and knew
the ways of violence. Wayne and I met outside
his salon as I sold cigarettes on the street.

He bought the entire carton of Player's Lights.
and offered to take me to lunch. I knew
what he wanted by the way he placed his money
in my palm. I'd been approached by men
before but I was hungry and it was winter
so I went with him. We spent the day and deep
into the night drinking at a bar filled with old
men who sat alone with sleeves of pale draft
beer tasting like vomit and piss. We left
after last call staggering over icy sidewalks

and falling into parked cars, the moisture
of our breath freezing against our faces, the ache
of coldness pulsing through my finger-bones
and wrists to pierce my drunkenness.
I had to find a place to stay the night. Wayne
beckoned me to follow. I walked head-down,
crushing ice and snow beneath my boots
until we came to houses separated by vacant lots
along the lake. Wayne pulled a portion of chain
link fence high enough to scramble beneath.

We crossed under the opposite fence and into
the backyard of a brick house the colour of dried
blood. The windows blackened out with newspaper
and tin foil. The only light, a bulb above the basement
door. Wayne lurched down the steps steadying himself
against the concrete stairwell and banged the door.
As we waited, I felt the silence swirling around us
coming in from the huge night over the frozen wastes
of Lake Superior, the freezing wind as hard
and unforgiving as iron or steel. Light rushed out

through the open door to reveal a woman: black
hair streaked with grey. Her fact thin with narrow
eyes that cut like the neat, sharp teeth of a fox.
I followed Wayne and the woman into the acrid
warmth of the smoke-filled, weakly lit basement:
a wide room with a concrete floor and oil cloth
card tables between metal poles bearing the full
weight of the house. I could see the hunched shapes,
people in groups of twos or threes around the tables.
In the back, the woman sat by a yellow refrigerator

filled with bottles of beer. Next to her a space heater
glowed and rattled like an angry coiled snake, a stench
like burnt plastic. Wayne and I sat and drank. Cigarettes
burned in the alcoholic gloaming like the red eyes
of demons. For four months of my twentieth year
I sold stolen clothing, stumbling with Wayne through
desolate winter dawns to pass out on his couch where
I fended off his drunken tearful gropes. Locking
myself in the bathroom as he punched the door
cursing me for failing to pay what he was owed.

DeCroo's hard-scrabble opera mines Charles the B. territory, without the horses.  These poems know what it is like to miss a meal, or several.  What it is like to feel guilty for the smallest piece of luck.

Rodney DeCroo's poems are rough as the rebar they put inside cement when it is forming.  The surface of it rough enough to rip your skin off -- but in truth it is the strength built inside buildings to hold them up, buildings, bridges, cities.  DeCroo's honesty comes at the cost of what he has already paid.  A cost we can't know.  But the resulting poems pop like corn going into oil.

His hair was oiled and slicked
back. He drove a blue sixty-eight Camaro
with white racing stripes and worked
at the steel mill. My mother said he
didn't drink much, was a Vietnam
vet like my father. Denny moved
into the apartment next door to us.
There were rumours he'd beaten his ex-fiancee,
a girl from New Kensington. My mother
knew Denny since high school, remembered
him as the silent kid alone in the cafeteria,
who didn't go to parties or play football.
Denny had a large eight-track collection
and played the Who, Cream and Zeppelin
so loud my mother banged the wall,
shouted at him to turn the music down.
One Saturday night my mother found
him sitting outside his apartment so drunk
he couldn't stand. When he raised his head
his eyes were raw from crying. She
sat with him for hours reading aloud
from the new testament, testifying
that Christ had saved her life.

That Sunday Denny came to church
with us. His eyes were still red,
he reeked of too much aftershave,
and his large hands trembled. So much
for doesn't drink much, my brother
whispered as we followed our mother
and Denny up Colfax Street. I sat next
to Denny in the pew, mother on the other
side. He was sweating and kept pulling
at his collar to loosen his tie. He took off
his suit-jacket and hung it over the back
of the pew, dark blooms of sweat beneath
his arms. When the collection came around,
Denny stood, pulled a handful of change
from his pocket and dumped it into the plate,
half the coins spilling loudly onto the floor.
He bent between the pews as people
stared, my mother stiff as the granite columns
framing the entrance to the church.

Denny stood with the rest of us, looking
down at the closed hymnal in his hands.
My mother leaned close, holding her opened
book in front of him. He shifted his eyes
to the black print and he spoke out loud,
The Lord is my redeemer, he shall lift me up,
then began to laugh, his eyes clenched shut,
his entire body shaking. The singing
stopped as parishioners turned to watch.
When my mother touched his shoulder
his head snapped up and his eyes opened.
Don't touch me, he said, and pushed past me,
knocking me into the pew. I watched his rigid
back as he walked between rows of sullen
faces, toward the huge white doors
and what waited outside for him.

Spent last night drinking too much red wine and listening to jazz at a new club in our neighbourhood so this morning I'm feeling like I was in a fight, and lost.  Apparently exactly the right temperament to lead a morning read of Next Door to the Butcher Shop.  The minions rose to the occasion and dark-danced Mr. DeCroo around the room a couple of times.

What Today's book of poetry most admires about the poetry of Rodney DeCroo is that it feels alive, you can take a pulse, alive and messy with human folly and frailty wrapped into brief moments of grace and the understanding that for most of us that is as good as it gets.  These poems strive to reveal and to share those moments.  And when it is all on the line, whom of us is going to be able to rise out of it.  These are important questions, they may be the most important.

Why Can't You Be Leonard Cohen?

She told me she disliked my poems,
that poetry should be beautiful, stylish,
sad and romantic. She said Leonard Cohen
was her ideal of a poet and a lover.
She spent a week in Montreal
wandering the streets, reading his books
in cafes, listening to his songs at night
in her hotel room. She said I was just
a dry drunk with anger issues
and a penchant for making
everyone around me miserable.
And why couldn't I be handsome?
Leonard Cohen was handsome in his way.
He tried, but you, you're just ugly.
Like your poems and your songs,
just ugly and mean. And why,
why couldn't I see the beauty in the world?
I told her that her assessment
of my poetry and songs was probably
the most accurate I'd heard.
But she was wrong on one point.
I'd seen the beauty of this world and known
it was not meant for people like us.

Today's book of poetry was honoured to dive back into Rodney DeCroo territory once again.  You feel like your taking a bit of beating but you come out the other side knowing just that little more.  Of course we had to put on protective clothing to mine these glowing embers but it was worth the fuss.

This is old school, tell it like it is from your busted and broken heart stuff.  Who doesn't love that. 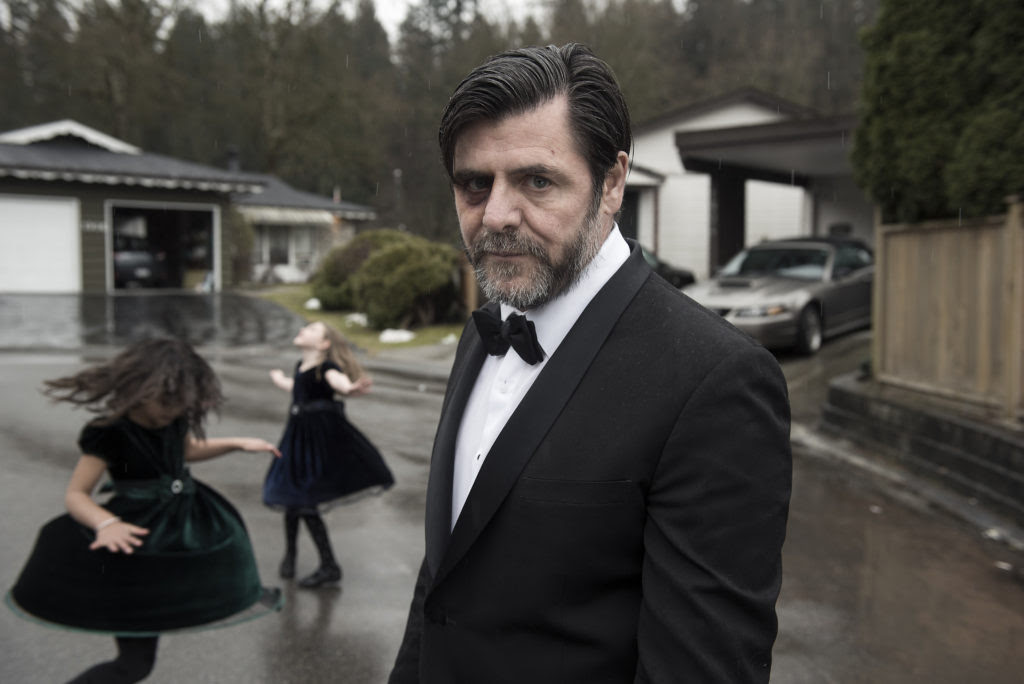 ABOUT THE AUTHOR
Rodney DeCroo is a Vancouver-based singer/songwriter and poet. Born and raised in a small coal mining town just outside Pittsburgh, Pennsylvania, he has called Vancouver home for years now. He has released a previous collection of poetry, Allegheny, BC (Nightwood, 2012) and seven music albums that have received critical acclaim in Canada, the USA and Europe. Music critics have named him one of Canada’s best folk/alt-country songwriters. Next Door to the Butcher Shop is his latest collection of poetry.

Rodney DeCroo's
"Stupid Boy in an Ugly Town"
Selections from "Allegheny, BC" as performed at The Cultch in Vancouver, BC during the 2014 Fringe Festival.
Video: Tonic Records