When Borrowed Days - Poems New and Selected by Marc Plourde came through the Today's book of poetry doors our "Poetry Bat Ears" tingled.  A few minutes with Milo, our head tech, in the stacks and BINGO.  Touchings (Fiddlehead Poetry Books, 1970) jumped out at us.  This charming Marc Plourde chapbook includes lovely artwork by Noreen Hood (Today's book of poetry thinks Noreen Hood was married to Hugh Hood) and posits Plourde squarely into the middle of the Montreal literary scene circa 1970.

There's a lot of water under the bridge from 1970 to the present.  Borrowed Days doesn't miss a beat, it reads/feels like an old lost friend from Montreal has come for a visit.  An old friend who has seen the world and recognizes his small part in it.

Plourde "stopped writing for some twenty years" and concentrated on translating some of the best Quebecois writers of his generation.  Today's book of poetry is glad to see Marc Plourde back in the saddle.  We can tell you, with confidence, that Plourde could cook before his hiatus and it would seem he has picked up the torch again without missing a step.

Some kids never go home. Evenings
they're out front of the poolroom, nervous
to get away, too young still
for a motorcycle
they stand-sit on the curb
seems almost
they grow out of the pavement, are always there
like the cops, the butcher shop, the Greek
pastry store, and old European
toadlike women each day crossing the railroad
to the factory
and back again, they come
bodies toddling
with the weight of their shopping bags full.

April and how this weather is
too cold still, tonight Carol, Dominic, Lagetti
will go looking for an apartment
hallway, one they've not been
kicked out of; half the fun the kids say
is waiting for the janitor
and running
Carol runs-walks back bent, feet pointed
inward, so is nicknamed "pigeon toes".
It was glue sniffing hurt her
legs, her joints,
she told me
and I didn't believe her at first;
first time I saw her walk I thought it a joke.

Dominic is part of The Tribe,
the neighbourhood gang; he has a red devil's
head etched
on the back of his jacket
and black gloves he flexes his hands in
and makes "snap" leather sounds with,
one fist
hitting the other opened hand, and he has
motorcycle boots, though no motorcycle.
Carol's also part of it;
her initiation came, she says, last week
at the Saint Anthony's
church basement Friday night dance,
in the toilet, they raped her she says.

Music reaches down Howard Street.
Outside, there are kids leaning on a railing,
lighting matches; the jukebox
song comes to them
in pieces, in the traffic
of people opening-shutting the poolroom
door, and it seems
almost they're dancing: Carol, with Lagetti
bent over her, his arms
moving inside her coat. When she turns away
she is tugging her jeans back
up her hips, she laughs and
swears; the popcorn box tucked in her belt
has spilled, pink kernels covering the sidewalk.

Marc Plourde's Borrowed Days places itself at the heart of Canada's two solitudes and that heart beats strongly on every single street that Plourde manifests from memory.  Walking through Borrowed Days tells us more about Montreal than any map or cartographer.

Plourde does venture out of Montreal and his poem "The Shoes of Budapest" tells us all we need to know about the worldly author.  But for the most part Plourde's heart resides on streets of his city where Plourde is a gentle humanist who sees hope in redemption.  These poems see redemption as a duty.

The plot was on a rise;
we had to climb to it, stand lopsided
at the graveside while rain fell
on December snow, on the ground at our feet
like a prelude to the new year's storm.

The family of stragglers was about to leave
when the old woman's youngest son, my cousin,
insisted on shaking everyone's hand
and showily hugged his older brother,
who appeared this morning
after twenty years, jetlagged
and jettisoned in a back pew of St. Francis.

As I entered the church, the younger brother
turned in his seat: I saw a thin face, a goatee,
a removed look. I searched for the boy's face
in the man's and as I looked
the priest began the funeral mass
though he was dying on his feet.

His eulogy remembered Margaret's devotions
at the Stations of the Cross
and her dusting the church statuary,
St. Francis and St. Roch,
but the family knew Margaret in her last year
had got confused, would bang daily
on the rectory door, demanding Sunday mass.
For Margaret, every day had become Sunday.

And the priest, Father Kirouac,
whose most constant parishioner
was demented  -  I wonder,
did he open the door to her?
Was there patience in his face
as he knew, more or less,
they would both be gone before spring?

After mass, seated on the altar steps,
he apologized in shallow breaths
for not accompanying us to the grave.
He outlived her by six weeks.

Today's book of poetry's morning read had Pharoah Sander's "Let Us Go Into The House Of The Lord" playing on the box this morning.  We followed that up with Yusef Lateef's sublime "Eastern Sounds" which may be the most overlooked masterpiece in jazz.  These both seemed appropriate choices for the steady and measured voice that Marc Plourde brings to the table.

Maybe it is as simple as this: a particular tone in a voice that tells you it seeks reason and clarity.  Plourde is all over that.

It rains and stops the morning long; we sleep
the long drive through mountain clouds.
Tomorrow, who will remember this?
Mist floating like moss in the pine trees,
grey mist blurring the mountains to memory; now
blossoms peck and spatter the glass, the windshield
wipers not moving, not moving yet.

Today's book of poetry is always going to have all the time in the world for poetry like Marc Plourde's Borrowed Days.

Whether he is inside the microcosm of a 1970's Montreal neighbourhood or aloft in the big world beyond Plourde's poems engage, inform and entertain.  Just like an old friend. 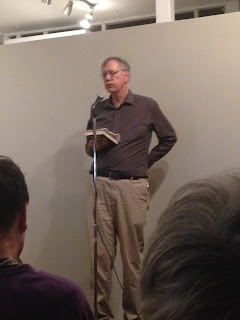 ABOUT THE AUTHOR
Born in Montreal in 1951, Marc Plourde established himself very early both as a poet and as a translator. His books of poetry include Touchings (1971) and The White Magnet (1973). His books of translation include The Grandfathers by Victor-Lévy Beaulieu (1975) and The Agonized Life by Gaston Miron (1980). He has published no original poetry in book form in over forty years.