"The United States themselves are
essentially the greatest poem."
- Walt Whitman, Leaves of Grass

Today's book of poetry almost walked into a wall last night while trying to remember just how attached Jack Kerouac was to Lowell, Massachusetts.  Today's book of poetry heard through the poetry grapevine that Paul Marion was involved with a Kerouac book a few years ago.  Then I'm thinking Robert Lowell's For the Union Dead for some damned reason.  Kerouac was searching for an America that was yet to exist and Lowell was lamenting a generational slaughter and still embracing that "greatest poem" the United States.  For the Union Dead is, as G.S. Fraser said in The New York Times, "a song of praise."

All of that to lead us to Paul Marion's Union River which we will contend is another song of praise and a worthy inclusion in that great American songbook.  Paul Marion has sunk over forty years of poetry into Union River and there is some deep water.

America's all over the map.
Pick your plague, grab your cure.
There's no front curtain, no wall in back.
Every ticket has its price,
Any fence is full of holes,
And it's an open field from Montana to Canada.
America's all over the map,
It's a human soup boiled from scratch in gypsy pots,
Crazed vessels, rare skillets, iron bowls that were stashed in bags,
Lugged by hands of every language over purple hills,
Along the glacier trail, through a plasma sky, straight from the steppes.
America's all over the map, its mix a staple crop..
Muddy Waters pirouettes on steam-guitar, spreads the blues on canvas.
He's a rolling stone in the bayou, a boatman on the Volga.
There's a French Quarter balalaika, there's a jazz master in Red Square,
There's George Balachine in a golden cowboy suit.

It is an American dream of sorts although we never see Grand Funk Railroad in here anywhere.  Marion rambles over the American psyche, landscape, and his vision of the vast impressionist painting of a country spread like a quilt under the 49th parallel.  Paul Marion's catch-all is over-flowing with love for the American dream in all of its variations.  Not a vulgar image of jingoistic hysteria but a genuine exploration and understanding of what really does make America great.

It's not like Union River is beyond noticing some of the enduring legacies of discord and the painful truths that accompany systemic racism, aboriginal neglect/genocide, the American war dead and the emotional cost of demanding the lives of the poor in payment to feed a nation's war-machine.  Marion is packing it all in there along with the bread and circuses.

I've been told I'm part Indian, but don't believe it.
North American tribe. Canadian blood.
Snow country natives. First people to make love on the continent.
The Marion, Ohio, All-Indian NFL team of 1922
Fielded Arrowhead, Black Bear, Deerslayer, Wrinkle Meat,
Laughing Gas, Red Fang, Baptiste Thunder, Lone Wolf, and Deadeye.
Indians made this pencil I'm using.
Same business as Henry Thoreau before his trip up the Merrimack River.
Like Jefferson and Lincoln, Marion spreads across the states,
Praise for the Swamp Fox, General Francis Marion,
Who tied the British in revolutionary knots down Carolina way.
Southerners captured the North's Merrimack, renamed the ship Virginia,
Then armored it for a clash with the Union's ironclad.
Marion Drive crosses Sunset Boulevard.
When actress Ruth Marion died in Carmel last week,
The L.A. Times praised her as "a stroke of good luck to her friends."
Her screen-star father had romanced Greta Garbo.
Jazz Age-script whiz Frances Marion earned Academy Awards.
I had not heard of the Hollywood Marions.
Costa Mesa, California, has a Merrimac Street.
In Missouri, one river is called Meramac.
The word can mean "Strong Place" in Algonkian,
Language of tribes from Massachusetts to the Rockies:
Pawtucket, Pemigewasset, Ojibawa, Cree, Fox
Shawnee, Arapahoe, Wamesit, and Blackfoot.

Most importantly, to Today's book of poetry, is how Marion is doing all this hard work and still coming up with poems that read like apple pie, peach pie, cherry pie, American Pie.  Paul Marion's Union River is tackling Ken Burns documentary territory in an attempt to tell the American story with as much unfettered and unfiltered honesty as his lens will endure.  These are fine poems and damned good stories.

The morning read here at Today's book of poetry was held under some minor duress.  It's a holiday weekend here in Canada and even though each and every one of our considerate and considerable staff is a complete heathen they all claimed religious fevers of one sort or another and abandoned their posts with considerable haste yesterday afternoon.  Only Max, our Sr. Editor, remains in the office today - and he was drunk on communal wine and rum-balls when I first opened the door to his dark cavern around eight this morning.  He was mumbling about the double-space after a period and whether the name Stormy was going to ruin weather based nom de plumes for the considerable future.

Harry at the Lowell Conference

He kept telling us he dropped out of high school, but Harry spoke as well
as any old politician at a hotel banquet. He asked why the U.S.A. and
South Africa are the only modern countries without national health care.
He called Reagan "a turkey" and described a White House full of smoky
mirrors. Harry Callahan of the Industrial Workers said Nancy's idea of
cruel and unusual punishment is being dragged to Sears and forced to
pick a dress off the rack.
Harry isn't sure Labor should be a political party, but won't rule
it out. "We're like rats," he said, "and when cornered, we'll fight -- fight
dirty if needed." Harry went to the Soviet Union. He said they have
hearts and put pants on the same way we do. "Why shouldn't I go to
learn something? The Pepsi and Caterpillar executives go twice a month."
He wonders why Americans don't know history. He said most people
want to be in unions, but aren't -- people can see that union workers
make more a week.
Harry said, "The democracy has problems. There's no democracy
at work -- never has been. American businessmen want authoritarian
systems at work." He said he might be the first guy to put a bullet between
the eyes of a capitalist if the fight goes to the street. He tells that to
businessmen, he said, and they listen, confident that it will never happen.

Today's book of poetry was very impressed with the passionate voice of Paul Marion and the reasonable speech of his sound and hearty Union River.  This is mature poetry and flawless story-telling from a first rate poet. 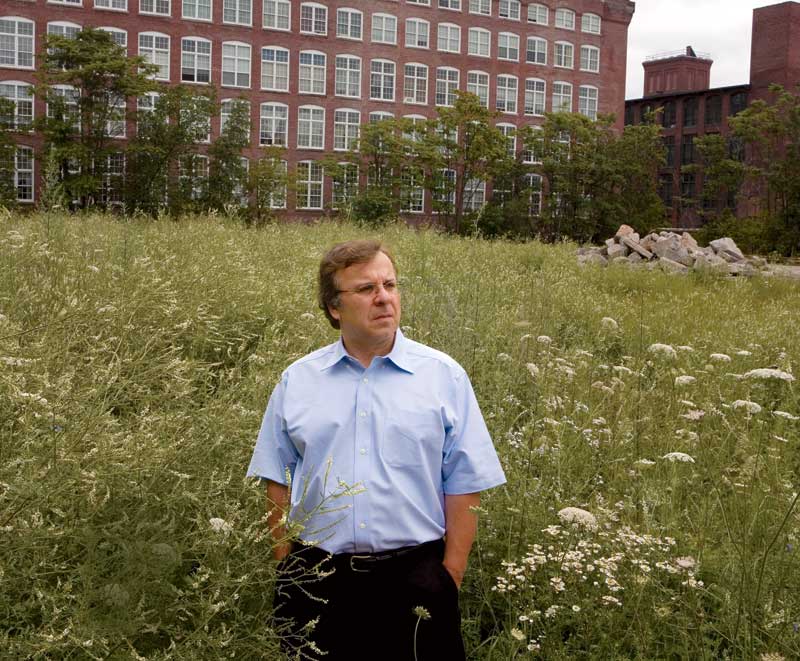 ABOUT THE AUTHOR
Paul Marion is the author of several collections of poetry, including Strong Place (1984) and What Is the City? (2006), and editor of Atop an Underwood: Early Stories and Other Writings by Jack Kerouac (Viking/Penguin, 1999), which has been published in translation in Italy (Mondadori) and France (DeNoel). His book Mill Power: The Origin and Impact of Lowell National Historical Park (Rowman & Littlefield, 2014) documents the making of a new kind of national park in Lowell, all told in the context of the city’s notable urban renaissance since 1970. A new collection of poems and sketches, Union River, is due in 2017 from Bootstrap Press. The book is a lyrical Americana address spanning 40 years of writing.