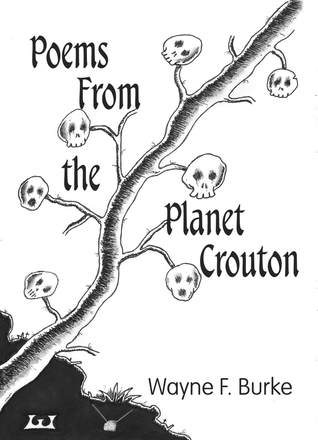 You can see those two Today's book of poetry offerings here:

Poems From the Planet Crouton is more of the same strong stuff and it is a hard sell.  This is Charles Bukowski in some of less hospitable moments, an angry Milton Acorn throwing beer in ire and indignation.  Wayne F. Burke likes to stir the pot, throw gasoline on the fire.

I wore sneakers while growing up,
nothing but;
shoes were only for church
and had to last
no one was eager to put up 20 bucks
for new shoes
or for anything else;
I got two pair of new pants at
the start of each school year,
one I wore two days in a row
the other three days
and reversed the order
the following week;
one day
while waiting for the school bus on the steps
of the grocery store
Mahoney the wise guy glue-sniffer thief
said to me: "At least I have more than two pair
of pants,"
and I said "Well, we can't all have a wardrobe like
yours
Mahoney,"
which got a big laugh
and caused Mahoney to
hate my guts
more than he already
had.

Burke is dissatisfied, disengaged, disinterested and disturbing.  It is persona or persona non grata?  Wayne F. Burke doesn't care and neither does Today's book of poetry.  Burke really does seem to embody a Chinaski ethic/ethos in these subterranean bluesick home-spun yarns of dispossessed indifference.

Today's book of poetry doesn't think that Wayne F. Burke has a heart of darkened cinder but we are convinced he doesn't live anywhere near Mr. Rogers.  It's not malevolence but there is a certain dark malice to Burke's undertoad.

And Today's book of poetry would be remiss if we didn't tell you that Burke and our office has had some correspondence since the posting of our blog/review about Dickhead.  Burke seems as consistent in his letters as he is real in his poems.

My Uncle tells me to go
upstairs
run!
bring back his bowling shirt
white with gold letters
yes master
right away
but I hesitate too long
and feel the pinch of his fingers
like pliers
on my earlobe
and am led around
the table
a kind of dance
not a waltz
a tango
of pain
that does not end
when he lets go
I carry it with me
up the stairs
and back down
through the years
the gold of the shirt
staining my hands
and nothing I could or
can do
to get the stain out.

This poem left Today's book of poetry in a cold sweat with the understated menace and stoic acceptance of circumstance endured and implied.

Another corker reading here in our offices this morning.  Our new intern, Maggie, insisted that the men should do the reading this morning while she led the women in a robust cat-calling, cursing fusillade of industrious feminist indignation mixed with equal shares of ribald and raucous rollicking roars of poetic approval.

Wayne F. Burke may be a challenge for the faintest of heart but Today's book of poetry continues to be entertained by the bright light intensity of the honesty in his voice.  Burke's voice never falters or uses a reverse gear.  It is hell or high water.

No corpse
just a box
with her ashes
in it
and her picture on the wall;
she went up in flames
to wherever--
a dark-eyed over-sized priest
who looks as if he stepped
from "The Godfather" movie
says that she is in Heaven
with Christ;
my older brother gives a eulogy
that brings a tear to my eye
and causes my sister-in-law to weep;
there is nothing else for anyone
to say
except for the priest
who insists that she is in
a better place,
to which
no one disagrees;
we put our coats on
and shuffle out the door
for the eats
at a restaurant which
none of us has been to
since the last funeral.

Today's book of poetry worked at the Canada Council Art Bank for a few days recently and was reminded in the most spectacular way that there is beauty and poetry everywhere we care to look.

While at the Art Bank I was working under the guidance of the sage old master-craftsman Michael the Hewko.  Hewko also built the beautiful shelves that line my office from floor to ceiling.  With his last installation of my shelves he left, on the one exposed shelf side, a brass set of numbers that act as a brace for the shelf and as a decoration, they look splendid.  But he installed these shelves some time ago and he still hasn't told me what the number "415" means.  Leaving work yesterday the beautiful old bastard handed me a small piece of folded paper and said that I wasn't to read it until he was out of sight.  Not sure where he got the quote:

"Information is the transmission of meaning.  When information is randomized, meaning
cannot be transmitted, and we have a state of entropy."

It strikes me that Michael the Hewko and Wayne F. Burke are cut out of the same misanthropic cloth.  Poems From the Planet Crouton are all about the transmission of meaning, in a direct clear line straight to the vanishing point.

ABOUT THE AUTHOR
Not once as a kid growing up in a small mill-town in the hills of North Berkshire County, Massachusetts, did I think of becoming a poet. I wanted to become a Major League Baseball player, and if I could have hit a curve-ball with more facility than I showed, I might have become one. Or maybe not: I had a lot of other things beside baseball on my mind in adolescence. Not poetry though. Only in college did poetry show up, for me, on the radar screen. My college roommate, a tough guy from a similar background as mine, and also an ex-jock like me, not only wrote poetry but read what he wrote to whomever would listen. He was beautiful; militant in his advocacy of poetry, and because of his example I began my first attempts to write a poem. I was nineteen at the time and at my second college and destined to attend two more before awarded a "Bachelor of Arts" degree quantifying me a totally worthless entity to the business and commercial world. A world I remained on the periphery of and low-down on the food chain for a number of years--years during which I thought more about writing poetry then actually writing any. Years in which the idea of being a poet was more enticing to me--and far easier--than doing the work involved in becoming a poet (or even a facsimile thereof). At some point in my later 30's--the exact chronology is beyond me--I published a few poems, but poetry was a sort of sideline to me; prose was what I worked at. Rather than poet, I considered myself scholar, critic, and future novelist. That I was 3rd rate as scholar, 2nd rate as critic, and unrated as novelist, did not deter me. I published two books of literary criticism in my 40's, and had numerous book reviews, articles, and some short stories published during my 50's...And then I gave up. Quit. Stopped writing and concentrated on drawing pictures; also went to nursing school and became licensed as an LPN. And then I had a heart attack. Or what I thought a heart attack, later diagnosed as arterial heart disease. Serendipitously, as I see it, I had begun writing again, strictly poetry, just previous to my diagnoses, and after by-pass surgery (triple though I was shooting for quintuple) I began writing daily and with a sort of vengeance. A schedule I have followed these past two years and one that has resulted in my recently published book (June 1, 2015) as well as a previously published volume and at least one future volume (now in larval stage).