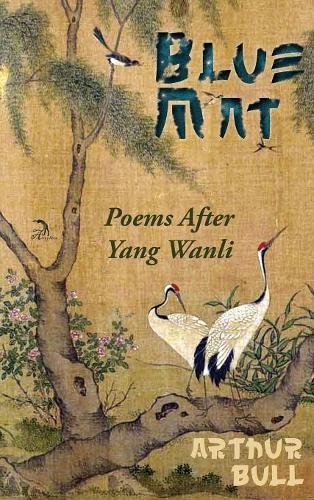 Arthur Bull has shown Today's book of poetry another way.  Arthur Bull starts Blue Mat, Poems After Yang Wanli with a couple of translations of Yang Wanli by Bull himself.  Yang Wanli was a Chinese poet who lived from 1127-1206.  Wanli wrote about the beauty of nature and at the same time was witty about life's little foibles and the human bean experience.  Bull's translations make Yang Wanli sound immediate, contemporary, cleversmart.

Arthur Bull's translations are seamless, and without notation it would be impossible to tell which were the poems of Yang Wanli, Du Mu or the very contemporary Arthur Bull.

I am joined on my blue rubber yoga mat
by a slug, moving as though all its senses
were concentrated in its two fleshy horns,
their round nubs stressing and straining
to extend perception to the whole universe:
seems pretty confident of getting it right.
I close my eyes awhile, then open them:
the slug is gone, having let behind only
a crooked white trail, shapely, still wet.

Arthur Bull's mantra, meditation and musing all poetic feels exactly like that of his long departed Chinese partners in crime.  Except they contain some of the scraps and flotsam and jetsam of our so called modern world.  Bull does capture, very succinctly, our slow march against time and circumstance.  It's all done carefully as mice and with admirable brevity.

"...Thus it was that we descended Wutai Shan, with a bus full of Buddhist pilgrims, monks and nuns, nodding and tapping their feet to the sound of Howlin' Wolf's voice."

Our morning read was a respectful grab-bag of energy and enthusiasm.  Arthur Bull's poems come from a deep well and his practice of Chan Buddhism.  Our minions wanted to be respectful and present when reading these poems.  Milo, our head tech, led the change and set the good example for the rest of my literary bedbugs.  The other minions followed suit.

So it was that on an overcast Sunday morning in Vanier a bunch of Canadians, mostly of Irish descent, did their best to honour Arthur Bull and his Chinese friends Yang Wanli and Du Mu.

Half-drunk or half-sober
on a three-day wander

I saw red and white flowers
opening in the mountain rain

Arthur Bull has done a remarkable thing with Blue Mat, Poems After Yang Wanli.  Bull has brought two Chinese poets, long part of the ether, back to life and respected them with his beautiful homage.

We should all be so kind to our heroes.

Blue Mat, Poem After Yang Wanli was nothing but pleasure.  Arthur Bull writes the simple line, with the weight of the world hovering. ABOUT THE AUTHOR
Arthur Bull lives in Nova Scotia, Canada. He has previously published three books of poetry, as well as four chapbooks. His poems and translations from classical Chinese have appeared in numerous Canadian and international journals. Bull is also a musician, and has worked for a number of small-scale fishery organizations.