Deep Well is exactly as advertised.  Dan Bellm is casting his bucket deep into that space between a mother and a son, that envelope between then and now, and the unknown distance from one heart to another.

Bellm is so soft spoken in these lovely poems that you are surprised when you get to the end and realize that he has been the strong man all along.

A shallow breath, then
a pause that might be the end,
then a shallower

one, a slight choking
clearing of the last of the
life caught in her throat,

a low sigh, faintest
wisp of an exhalation
set free -- that was all --

and already, as
we stroked her hands, her cold brow,
in the suddenly

through an unmarked door,
had her spirit fled? Or was
she now going to

be wherever we
are? Sitting on the edge of
her last bed I closed

my eyes, as if to
come again into my first
room in our long-lost

house, as if to know
as before that she was near,
would come if I called--

Bellm, in his quiet dignity, has that most difficult conversation with his mother only to discover that she'd been waiting for him with love.  Today's book of poetry grew up in an era where my generation mocked the idea of anyone being gay, taunted any suspect.  We were not kind.  Some of us have learned how wrong and stupid and silly we were.  For any person of that era a public declaration was beyond brave.  In a world that believed being gay was taboo it required a strong, brave heart.  Families were torn apart because sons wanted to kiss boys.

To write, or to walk,
on water: when I was a
boy, the image I

had of walking on
water, that miracle, was
so clear. To a boy

who can ride on a
Persian carpet, everything's
a miracle. I
tried it once in a
pool and sank to the bottom.
Maybe the deep was

calling me; maybe
there was no place for me on
the surface, or in

the miracle. I
tried, quickly, one time only,
one instant only,

with no witnesses.
Nor did voices call to me
from a boat; they came

from the deep. At the
bottom, before she died, my
mother was singing.

What my mother was
singing cannot be said. It
was not a matter

of saying; it was
something I heard. Her voice came
from the bottom and

returned me to the
surface; it showed a way back
to breath. Between two

Beyond the water,
I sank into her voice to
breathe again. What the

miracle is, now
I think I know: not to walk
on the waters but

between them. And since
what my mother was singing
can't be said, I write.

Today's book of poetry identified with Dan Bellm at so many points in this charming discussion he is having for our benefit.  Not many books of poetry dare to talk about the nature of love and come out shining on the other side.  The very clever Bellm shows us how it is done.

Our morning read was rendered tender by the whispering voices of our own departed mothers.  By the end of Deep Well there wasn't a dry eye  in the house - but we were all smiling.

Underneath the dim
eternal lamp the monstrance
of the sacrament

stands open all the
hours of God's death, the crosses
wrapped in shrouds. At the

who will have to live
on. My mother must think I
am playing somewhere,

doesn't know that I
have sneaked into the church to
pray, but surely she

thinks of him, too, the
boy I waited all winter
for, the one taken

without a breath, name
the family does not mention.
There is another

angel in heaven
now, she said, to hear our prayers,
and that was all, a

tiny open place
on the new grass without a
stone -- no sighing, no

why. She smoothed a fresh
cloth over the table and
went about her work,

setting places for
the family to sit and eat.
He would have been like

with you, mother, all
my days, I read in the book,
waiting for a voice

to call me brother,
breath frozen silent in the
incense of the air.

Dan Bellm's Deep Well makes me think that spring is right around the corner, that the rain will stop and the blue, blue sky will be as bright as it was in our dreams.  Bellm finds joy and with joy comes hope - and you all know how much Today's book of poetry is a fan of hope.

That there is no love like a mother's love most of us already know, Bellm reminds us by touching that part of our hearts. 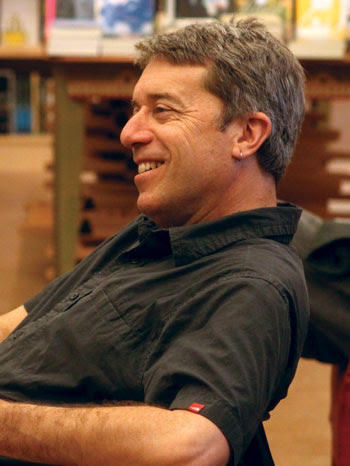 ABOUT THE AUTHOR
Dan Bellm lives in Berkeley, California. Deep Well is his fourth full-length collection of poems. His previous book,Practice (Sixteen Rivers Press, San Francisco), won the 2009 California Book Award. Dan’s first book of poems, One Hand on the Wheel, launched the California Poetry Series from Roundhouse Press; his second, Buried Treasure, won the Poetry Society of America’s Alice Fay DiCastagnola Award and the Cleveland State University Poetry Center Prize. His poems have appeared in Poetry, Ploughshares, The Threepenny Review, Best American Spiritual Writing, The Ecopoetry Anthology, Word of Mouth: An Anthology of Gay American Poetry, Beyond Forgetting: Poetry and Prose About Alzheimer’s Disease, and many other journals and anthologies. Recent books of poetry in translation include Speaking in Song, by Mexican poet Pura López Colomé (Shearsman Books, UK, 2017), The Song of the Dead, by French poet Pierre Reverdy (Black Square Editions, New York, 2016), and Description of a Flash of Cobalt Blue, by Mexican poet Jorge Esquinca (Unicorn Press, Greensboro, NC, 2015). He teaches literary translation and poetry in the MFA in Creative Writing Program at Antioch University Los Angeles, and has received fellowships from the National Endowment for the Arts and the California Arts Council. www.danbellm.com.

BLURBS
With a touch on the keys of language as light as the air we breathe, Dan Bellm traces his mother's death, and abides her continuing presence, as the keeper of "this/ blessing of kindness" which is both hers and his. Deep Well is a book of the purest poetry I have read in a long time. I am grateful for it.
-- Alicia Ostriker, author of Waiting for the Light
Dan Bellm's Deep Well is a breathtaking, constantly astonishing elegiac sequence of poems in honor of his mother. Reflecting upon both the power of her presence in his life and the deepening grief of watching her passage through Alzheimer's, Dan Bellm both celebrates the fierce integrity of this remarkable woman and quietly charts his own poetics of loss. These lyrics of memoriam and these deep songs (in Lorca's sense) of mourning seem almost to etch themselves onto the air. Keep this book at hand; hold its passages close. This is an essential collection of poetry.
-- David St. John, author of The Last Troubadour: New and Selected Poems
Speaking through the wound of grief, Dan Bellm reaches to the most sorrowful depth of first consciousness and clarity, a true infans, a state before words, one that can neither laugh nor cry except in innocentia, the inability to harm. Few humans, even few poets, can preserve such a state. Dan Bellm is one of them. This Deep Well, this wide-ranging metaphor for the one who taught him to love writing, conveys a trust and a faith in sacred words that carry the "undying tremor and draw" Seamus Heaney compared to water far down a well.
-- Pura López Colomé, author of Via Corporis

Wrought in a series of delicately articulated three-line stanzas—as if each stanza is a meditation on the relationship between the mother, the son, and the spirit—Dan Bellm's poems have worked some sort of magic on my heart. Reading Deep Well, I am at once sad and elated, aware of righteous indignation and far-reaching compassion. The poems here are part of a conversation that knows no boundaries. Neither foreign languages nor national borders, not denials nor death, can hinder these urgent and universal utterances. I am grateful to Deep Well for its precise and profound translation of what it means to inherit this lot that our language calls love.
-- Camille T. Dungy, author of Trophic Cascade

In Deep Well, Dan Bellm writes the poems none of us ever wants to have to write, on watching a parent die, and he does it with a sense of beauty and wonder that, in spite of the suffering, leaves the reader in awe of life: “Her voice came/ from the bottom and// returned me to the/ surface; it showed a way back/ to breath.
— Mark Statman, author of That Train Again

Dan Bellm transcends the expected in every poem of Deep Well. Nuanced, lyrical and reaching ever deeper beneath the ground, this collection is Bellm's best yet.
-- Idra Novey, author of Ways to Disappear

Poems cited here are assumed to be under copyright by the poet and/or publisher.  They are shown here for publicity and review purposes.  For any other kind of re-use of these poems, please contact the listed publishers for permission.
We here at TBOP are technically deficient and rely on our bashful Milo to fix everything.  We received notice from Google that we were using "cookies"
and that for our readers in Europe there had to be notification of the use of those "cookies.  Please be aware that TBOP may employ the use of some "cookies" (whatever they are) and you should take that into consideration
Posted by Today's book of poetry at 8:26 AM