Your mother lost to dementia, your ex lost to the suburbs and your father was missing from the start, what do you do?  You make fine poems that are a powerful statement of self determination and womanhood.  If you're Toni Mergentime Levi you make poems out of it to make sense of the world.  Levi is a romantic loser poet of the most optimistically hopeless type, just like me.  Unlike Today's book of poetry Levi is expressing a world view of womanliness.

Toni Levi's White Food is too grounded and reasonable to let it all get away but as we are all gloriously doomed Levi reports on that from the inside and with a sense of irony as earned as a bad boxing nose.  White Food is a poetic catalogue of a woman's survival in a world where gender is a systemically unbalanced barrier.

Toni Mergentime Levi is completely aware that as a Jewish woman the scales are not balanced in her favour.  White Food doesn't bemoan as much as report from inside the battlefield.

Milk arrives like a blessing in my dreams --
blue-white as a glacial waterfall from a far-off thaw.
In my most joyous dream, a precious rare appearance,
I am old -- old as I am now. But suddenly, my breasts
are filled with milk again and waking I remember

the neonatal ward, where my full-term bilirubin baby
looked like some blue-ribboned, beefy best-in-show.
In reality, of normal size, my jaundiced giantess
dwarfed the pink wrinkled heartbreaking preemies
riddled with tubes and sensors in the Isolettes.

They sent me home in tears, bereft, without my baby --
blindfolded in her fish tank under therapeutic light,
without me (impossible!) - her only known universe.
For two unrelenting days at home, my milk dripped,
useless as my love. For two years after, she drank her fill.

Milk courses through my dappled world of dream.
My breasts are swollen, tender, nipples tipped in red.
My milk is a river flowing to the land of tiny babies.
All -- now all can emerge from their boxes, alive.
Those who said I wouldn't have enough were wrong.

White Food works for a variety of reasons and one of the big ones is that Levi's sense of humour, as dark as it is, adds a little light at all the right moments.  Levi laughs, sometimes through her tears and these poems are about the resilience a woman needs to summon in the world of men.

Levi is giving admirable advice to anyone listening, Levi is saying that life is short and if you're jumping in, jump in all the way, go big.  Levi is endorsing taking that chance because she is well aware that there are only so many chances meted out before there are none left and cancer or dementia or that big dark train destiny coming down the crooked tracks blowing your name loud and clear and ominous as it appears at the short end of your horizon.

I don't miss anyone
who's truly gone.
Thanks to my father,
absent when present,
the dead are with me
as much as they ever
were in life.

My late mother,
devoured by dementia,
has been redelivered
to my mind
like Red Riding Hood
from the bad wolf's belly,
whole and sound.

My grandmother lives anew
in rum-laced cakes I bake,
following her recipe.
Grandpa's voice
echoes in the chorus
when operatic drinking songs
are on the air.

Yet now and then
I miss my husband (ex),
remarried in suburbia,
while I sleep alone
in the bleached sheets
of our half-empty bed,
sometimes reaching for
a ghost.

Winter just won't let go in this neck of the northern woods.  Snow on the ground this morning here in Ottawa.

Today's book of poetry has been deflecting efforts from my staff to modernize.  I've insisted that long underwear allows us to turn down the heat in the office and they insist I am heartless.  That I refuse to scrap our steam-punkish Commodore 32 RCA Victor word processor with a 33 RPM modemish thing just because there is a little smoke and a few sparks only seems reasonable to me.  There are a couple of more years of good servic left in that little creature, even if it has traumatized one or two of the younger staff.

We have people in our office now who do not understand that at one time telephones were connected to the wall by a short wire.

Not one of their new finagled phones helped a single bit with today's shovelling or with our morning poetry read.  Toni Mergentime Levi reminded Today's book of poetry of Fran Lebowitz, if Fran Lebowitz wrote poetry.  That is meant as a compliment.  Lebowitz has saintly status in our offices and has done since she first published Metropolitan Life in 1978.

Strong, smart and funny woman are far more common than they are given credit for.  The truth is that many of us simply aren't listening closely enough to the stories women are telling us.  Misogyny has some deep roots.

White Food is a Toni Levi casting an honest and revealing light on the relationships that make and define what we can call family.

Letter to a Daughter

Rebecca, do not magnify the dangers of the city.
Here birches crack in little wind
and fall on whatever passes by,
tractors have accidents,
farmers lose thumbs.
A boy broke his neck
diving too shallow,
children go hungry,
bring red welts
not apples
to school,
neighbors are
murdered,
people
lock up.

The only safe place where no one can hurt you
or break your heart or steal your money
or burn down your home
or snatch your children
or torture the cat
is death.

I know many ways to die.
Not to love is death.
Not to allow the sear
of grief or pain.
Not ever to eat fruit
and let the juices drip.

Blaming and beating
the tree that grows aslant
is death, especially
if you are the tree.

Shunning silence,
loving thunder
more than the work
of making rain
is death.

And taking all your light
from a single source
is death.
So is being absolutely sure.

Remember that boy
who dove too shallow.

Toni Mergentime Levi's White Food might pretend to be light snack food and sneak in the door but the disguise is amusing.  Levi is really a far more formidable tasting menu.  Levi can orchestrate and she can burn. 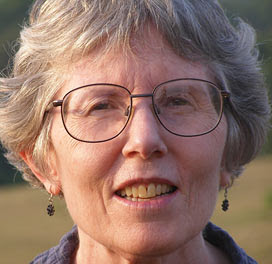 ABOUT THE AUTHOR
Toni Levi is the author of three books of poetry: White Food (Mayapple Press, 2016), Watching Mother Disappear & Other Poems (Mayapple Press, 2009) and For A Dancing Bear (Three Mile Harbor, 1995). Her poems have appeared in numerous journals including Prairie Schooner, Crosscurrents, Confrontation, Kansas Quarterly, California Quarterly, Apalachee Quarterly, and Manhattan Poetry Review. Her work has also been featured on the Internet on Poetry Daily, on WBAI-FM and in a number of anthologies, including two editions of the Anthology of Magazine Verse & Yearbook of American Poetry.

Toni has been awarded writing residencies by the MacDowell Colony, Djerassi Resident Artists Program, VCCA/Virginia Center for the Creative Arts, Ucross Foundation, Millay Colony for the Arts, Saltonstall Foundation for the Arts, Künstlerhaus Schloss Wiepersdorf in Germany, and Konstepidemin in Gothenburg, Sweden.

A long-time singer with the New York Choral Society (www.nychoral.org), Toni has written two original opera librettos and has had a number of poems set to music by classical composers. Venture, a collaboration with composer Charles Fussell, premiered at Tanglewood in 2007 and will be released on a recording by the Boston Modern Orchestra Project. Her opera libretti include Thanksgiving, one of several collaborations with composer Paul Alan Levi, which won a Grand Prize for New Opera given by the National Music Theater Network and Seagram’s. The opera, which takes a serio-comic look at hypocrisy in family relationships, has been performed at the American Music Theater Festival, Mitzi Newhouse Theatre at Lincoln Center and other venues.

Toni’s second libretto, In the Beginning, is a surreal parable showing how child-rearing in western society produces a destructive civilization. Toni was also a prizewinner for the book and lyrics for Happily Ever After in a Theater for Young Audiences Competition sponsored by Theatreworks, USA.

A native New Yorker, Toni Levi lives in Manhattan. She is a graduate of Cornell University (BA in English) and the Newhouse School of Communications at Syracuse University (MA in journalism). She works as an independent fundraising consultant for non-profits, specializing in foundation and corporate grant-making.

BLURBS
A wonderful book! In this lovely and affecting collection Levi's poetic stories take us on a life-long journey, wherein the stewardship of time, memory, humanity and love passes from one generation to another, challenging each of us as we travel on. It may, indeed, be darkness that lies at the end of our journey, but as Levi suggests, we are sustained by the hope that some essential trace of who we are and those we've loved will survive.
- Eleanor Lerman

Toni Levi's poetry has grace, intelligence, delicate feeling and wit. Her clear vocie can be heard in all she writes.
- Molly Peacock