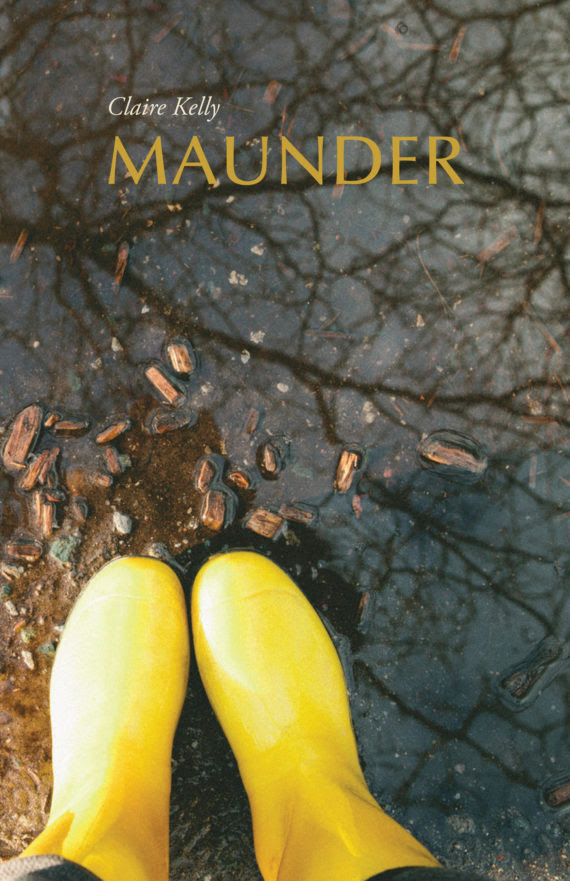 To maunder: Move or act in a dreamy or idle manner.

Kelly can dial in comic at whim but what Today's book of poetry glommed onto was that Kelly never goes to the easy out.  This is master-class material and I'll try to tell you why.  From the very first poem in Maunder you are comfortably in the Kelly kitchen and she can burn.

The Human Gyroscope: A Study in Momentum

Olive Oyl swings and capers
in front of the bar band.
All sinew and bowl cut, zombie arms,
graceless angles. Plumpness on her
would be a joke: champagne thrown in the sea.

Her Popeye hunches his shoulders—
no can of spinach to be wolfed, just a bottle
of domestic—and observes his feet as if they plot
instead of plod.

Olive's whirligigging. Small breasts jostling
under flimsy fabric. She's
sped beyond                       to another dimension,
(or has discovered dimensionless-ness),
She's a wild quark, a string theory jiving.
Broken loose, she's neither particle
nor wave. Something different.
The opposite of inert. A gas that might
spark more than mockery.

Cacophony. The drummer's over-the-top slaughter
of his rack-mounted toms ends the set.
It's all intake and outtake now.

Matter collapses into chairs.
Bathroom driven, Popeye pukes
all the way up the stairs and round the bend,
followed by an acolyte of bucket and mop
collecting another sample to be analyzed.

Ears ring with absence of racket.
Olive Oyl downs her whisky and soda.

Claire Kelly understands that the punch line isn't always where the best action takes place.  And as a result her syncopated timing is constantly pushing us towards all new and unexpected rewards.

Today's book of poetry isn't kidding about the reward thing, Maunder is literally packed with page after page of aces.  One of Today's book of poetry's closest and dearest friends fancies himself an artist, and he is a fine one, but mostly he is a flaneur, a world-class observer.  Claire Kelly is a flaneur of distinction and you are going to want to hear every word as she shows you the world, not as it appears, but through her reasoned prism and suddenly you begin to see how things really are.

"Fun!"  Kathryn, our Jr. Editor, asserted that Maunder was serious fun, adult fun, revealing fun, understanding of the Magi fun.  And just to prove Today's book of poetry's point here is a dandy list poem from Kelly.  And you all know how we like a good list poem here.

A person who nods.

A chunk cut from the ear of a feral cat.

An albino python stuffed and mounted above a mantle.

The taste of under-ripe but still palatable fruit.

A photo of near-deathbed relatives.

A scar that brings hypnotic comfort.

The artistry between nudity and nakedness.

A prophecy from one unaccustomed to giving good news.

Our morning read was the best of the season so far.  The spring sun has finally broken through here on Dagmar and we've opened up the windows here at Today's book of poetry.  We had several visitors on hand this morning and we lined them up so that they could take their turn with Maunder.  Alex, Otis, Caroline, Sabera and Jean all tackled Kelly and with excellent result.

Today's book of poetry knows nothing about Claire Kelly personally, Maunder is her first book but we are certain it is the first of many.  Another thing we are certain of is that my grandmother was a Kelly too.  So Today's book of poetry acknowledges we might have had a predisposition to Kelly on the off chance we are related.  But truth be told, no Kelly on my side of the family ever had much in the way of sense to rely on.  None of the Kelly's on my side of the family were bookish in any way.

Claire Kelly's Maunder reminds us of why we love poetry in the first place with one wise assault after another.  There is nothing quite like those A-ha! moments where a poem not only surprises you but changes your mind with delight.  Kelly's Maunder is poetry full of opportunity and hope, optimism and just a little experienced dread.

Linguistically, sleep loss appears to interfere with novel
responses and the ability to suppress routine answers.
—YVONNE HARRISON and JAMES HORNE,
from The Journal of Sleep Research

Stubborn as a turntable
spinning Wu-Tang clan
until the neighbours pound
an aggrieved beat
on the 3a.m. walls.

Jagged as the schismatic end
of a too-close friendship,
with hangouts and cohorts divided
by even and odd days
into a checkerboard calendar
of camaraderie and loneliness.

Stiff as the drinks
my mother no longer pours
after finding religion
in my brother's ashtray:
Jesus' bearded visage
radiating from a nicotine-
stained Styrofoam plate.

Pockmarked as the sixth moon of Jupiter
after a mining conglomerate
ceases gouging its smooth surface,
hauling an armada of icebergs
through the solar system.

Sure-fire as taking your six-year-old
to see The Exorcist and,
in the middle of the night
laying green vomity goo
by the bed until he awakens,
terrified, a livewire bundle
of future therapy bills
and sleep deprivation.

Whoosh.  If we said that Claire Kelly always plays nice we must have been stringing you along.  Maybe we are related after all?

ABOUT THE AUTHOR
Claire Kelly’s work has been published in various literary journals, including The Malahat Review, Exile Quarterly, Event, and Prism International. Her chapbook, Ur-Moth, was published in 2014 by Frog Hollow Press. Maunder is her first full-length collection. She lives and writes in Edmonton, Alberta.

BLURB
Rural wanderers and urban flâneurs, the myriad speakers in Claire Kelly’s Maunder, swagger, stalk, tiptoe, and promenade inquisitively through time and place, attentive to the vertiginous strangeness of their own experience, the “symbiotic economy” of self and other. Kelly examines oddity and quiddity alike with resilience, humour, and sonic verve.

—Michael Prior, author of Model Disciple