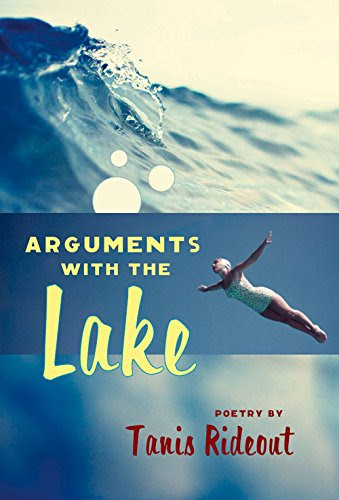 Tanis Rideout's Arguments With The Lake is a fictional account of the lives of Marilyn Bell and Shirley Campbell, two long distance swimmers who tried to swim Lake Ontario in the 1950's.  Campbell was unsuccessful and Bell became a legendary figure.

Arguments With The Lake imagines their relationships, the relationship we all have water and the tides that push us together, pull us apart.

This lake, like others, was dug out.  Glacial ice grinding south, scouring
weak Silurian stone, an arctic tsunami leaving only the backbone
of the escarpment.  Canadian Shield and broken tumble of kames in its
retreat.

The glacial rebound cast this lake of shimmering waters, Ontario, Give
or take
a geologic blink.  And now, a girl on Holocene shores measures the
distance -
her to here.  Fifty-four kilometres as the crow flies, the herring gull,
the cormorant with dried wings.  Sixty-four against the current.
Three point two kilometers an hour, slower than a winter housefly
bumbling against your window.  This might be finished tomorrow.

She inhales, wishes for the bones of a bird, a pigeon's honing for home.
Small arms become wings, beating against the jagged lake.
She'll make the decision over and over and over.
Nothing is a miracle or happens only once.

As much as these poems, as a collection, tell Marilyn Bells' story – emotionally, these poems are telling universal stories, ones that we can all identify with.

I have to believe Rideout is some sort of swimmer herself, has a great deal of experience being in the water, at least that's what her poems tell me.  I know two serious swimmers who are also writers.  Richard Taylor, whom I had the pleasure of studying under at Carleton University, has written at length about swimming and his relationship to the water, the contemplative universe it creates.  Another friend, Toronto poet Ward Maxwell, also swims for distance.  Rideout has captured the feel of that world and shares it until your fingers begin to prune a bit.

Inside there's terror.  Just her and the lake,
dark as the space under her bed.  The embryo curl of her feet to her
chest.  Arms churn, pray they won't tire.  Six hours to daylight.

Eggbeat.  Breathe.  There's the hand reaching from the deep
when her foot slips from mattress in nightmare throes.
Wails.  There's no making it better.  No mother's palm
on forehead.  Calming cool.  One foot disappears
beneath.  Breathe.  Breathe.  Then the other.  And she's lost
from the ribs down, as though amputated, erased in ink.

The enormous noise of the lake when you're in it – breathe –
every dead and living thing it holds waiting.  The black of it a
tremendous
hum.  First one stroke, then the next cuts, throws out white
froth, delineating her from the dark.  Breathe.

Tanis Rideout doesn't make this movie into a Hollywood fairy tale – it's more of a tug of war against the pull of tides and reason.  Rideout's crisp voice resonates throughout this saga whether from behind the winsome eyes of Bell or those of the tragic Campbell.

On the shore:  an ambulance, a reporter disguised
as a nurse betrayed by lipstick, typewriter-chipped nails,
insensible shoes.  Holding pruned hands, she pokes, prods –
each instrument's a question.  You're being distilled.

How long before the water gets into every part of you?
Fingers and toes swollen in evolutionary memory, to hold your place –
wet through and through, even that spot below
the tongue, across the gums that holds a hangover.

All the symptoms of water on the brain – excessive
sleepiness, slow movement, vomiting.  The whorls
of fingerprints recede, and you're left
the same as you were before.

For days you puke and piss the lake, its currents
eddying in shrinking veins and the marshlands
of your lungs.  With each move, each dreaming toss
and turn, the lake still sloshes against your skin.

Rideout gives us a history lesson, a swimming lesson, and a treatise on the nature of the long distance swimmer – but she is really talking about the navigation we must all endure, pulled as we are towards the rocks of shore.

Moorless nights strung out along the shores
of Belleville, Napanee, Kingston.  Lake becomes a river.
Then Kingston, Brockville, Morrisburg where the last
of those brick loyalist homes are claimed as B & Bs
for two-car couples arriving by the highway.

In the seaway, the rest dwindle, subside and sweep
out to sea.  Along with everything lost:  a husband, children
and years of false sobriety.  Detritus resurfaces wanting
remembrance:  chipped, faded, broken down.

Messages come, not by bottle – they're all shattered –
but by pigeons that perch and coo on every windowsill, by gulls
that shriek and warn with red dots on their beaks.  I am their home.
I make for the next port, and they'll find me there, too,
as drowned as those swamped farmhouses
below lumbering cargo ships on the Saint Lawrence.

These comments appear on the back cover of Tanis Rideout's  Arguments With The Lake, I think all three of them eloquently say what I was attempting while thrashing about in deep water.


"Cold-eyed and driven, these poems carve away the fatty sentiments around the Great Lake swimmers, those glamour girls of myth.  With these constantly surprising and multifarious narratives starring Marilyn Bell and Shirley Campbell, two girls swallowing the 'frigid knife of water," Tanis Rideout proves herself capable of just about anything."


"Poems that swim elegantly, that slide streamlined with every other flowing thing - as if they themselves were another layer of fluid."