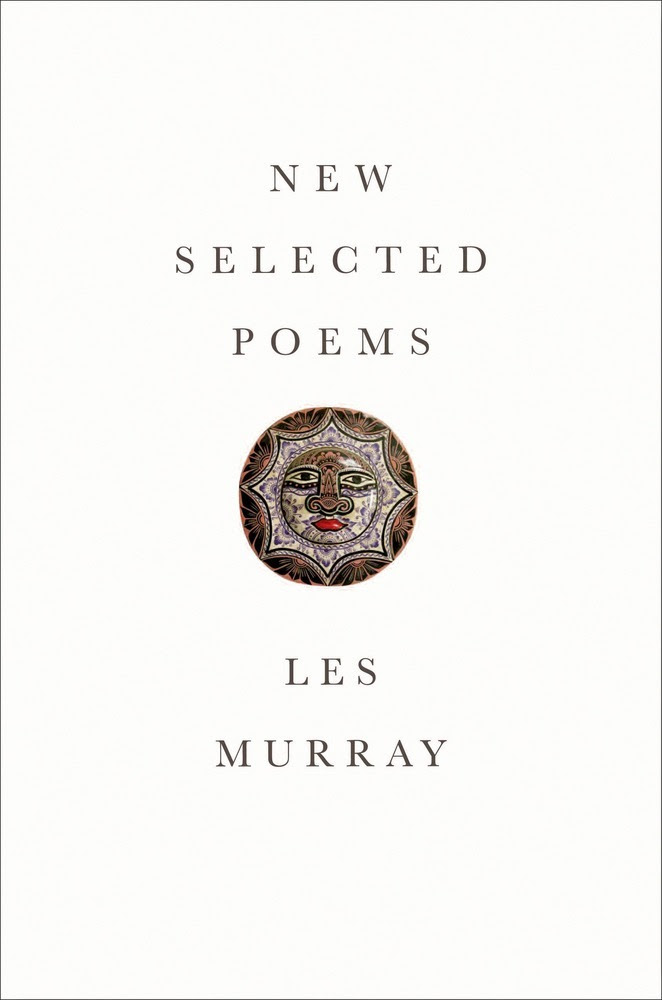 Fifty years of poetry, from the 60's to the present day.  Les Murray doesn't have an identifiable style, he's that guy who is comfortable in every room of the poetry house.

There are rhymers, prose poems, dialect poems (think Paul Laurence Dunbar in Australia), short poems, couplets, sagas and everything else under the hot, hot sun.

As you all know by now the staff here at Today's book of poetry love a good list poem.  The poem "Migratory" almost fits the category.

I am the nest that comes and goes,
I am the egg that isn't now,
I am the beach, the food in sand,
the shade with shells and the shade with sticks.
I am the right feeling on washed shine,
in wing-lifting surf, in running about
beak-focused: the feeling of here, that strays
and stays, then lengthens out over
the hill of hills and the feedy sea.
I am the wrongness of here, when it
is true to fly along the feeling
the length of its great rightness, while days
burn from vast to a gold gill in the dark
to vast again, for many feeds
and floating rests, till the sun ahead
becomes the sun behind, and half
the little far days of the night are different.
Right feelings of here arrive with me:
I am the nests danced for and now,
I am the crying heads to fill,
I am the beach, the sand in food,
the shade with sticks and the double kelp shade.

The poems in Les Murray's New Selected Poems were chosen by Murray and represent over fifty years of unique craft.  Murray has been a busy boy.  Here is a list of some of his titles:

Fraser Sutherland, Canadian poet and critic (and graduate of Carleton University, one of my alma matter) said in Toronto's Globe and Mail newspaper that Les Murray was "the best writer of poetry in English", and Fraser Sutherland is worth listening to.

I can't quite match that statement because I haven't read all of the poetry written in English -- and Michael Ondaatje is still alive and writing.  But Murray certainly has earned his high esteem.  I asked around, some poet friends, and although Murray was a somewhat new discovery for me I learned he was a touchstone for others.

The test for feeblemindedness was, they had to make up a sentence using
the words dog, fox and field. -- Judgement at Nuremberg

These were no leaders, but they were first
into the dark on Dog Fox Field:

Anna who rocked her head, and Paul
who grew big and yet giggled small,

Irma who looked Chinese, and Hans
who knew his world as a fox knows a field.

Hunted with needles, exposed, unfed,
this time in their thousands they bore sad cuts

for having gaped, and shuffled, and failed
to field the lore of prey and hound

they then had to thump and cry in the vans
that ran while stopped in Dog Fox Field.

Our sentries, whose holocaust does not end,
they show us when we cross into Dog Fox Field.

Murray wears a number of different brightly coloured coats and the poetry seems to come from a bottomless well of wit.  There are subtle poems that whisper wisdom and wild, raconteur rant type musings that will spill your whiskey and get your feet moving.

This vast catalogue of verse will fill all your poetry needs.

This last year he was wandery:
took off a new chainsaw blade
and cobbled a spare from bits.
Perhaps if I lay down
my head'll come better again.
His left shoulder kept rising
higher in his cardigan.

He could see death in a face.
Family used to call him in
to look at sick ones and say.
At his own time, he was told.

The knob found in his head
was duck-egg size. Never hurt.
Two to six months, Cecil.

I'll be right, he boomed
to his poor sister on the phone
I'll do that when I finish dyin.

Don't die, Cecil.
But they do.

Going for last drives
in the bush, odd massive
board-slotted stumps bony white
in whipstick second growth.
I could chop all day.

I could always cash
a cheque, in Sydney or anywhere.
Any of the shops.

Eating, still at the head
of the table, he now missed
food on his knife side.

Sorry, Dad, but like
have you forgiven your enemies?
Your father and all them?
All his lifetime of hurt.

I must have (grin). I don't
think about that now.

Going fast, over Christmas,
he's still stumble out
of his room, where his photos
hang over the other furniture,
and play host to his mourners.

The courage of his bluster
firm big voice of his confusion.

On the second day:
You're bustin to talk but
I'm too busy dyin.

Grief ended when he died,
the widower like soldiers who
won't live life their mates missed.

Good boy Cecil! No more Bluey dog.
No more cowtime. No more stories.
We're still using your imagination,
it was stronger than all ours.

Your grave's got littler
somehow, in the three months.
More pointy as the clay's shrivelled,
like a stuck zip in a coat.

Your cricket boots are in
the State museum! Odd letters
still come. Two more's died since you:
Annie, and Stewart. Old Stewart.

On your day there was a good crowd,
family, and people from away.
But of course a lot had gone
to their own funerals first.

Snobs mind us off religion
nowadays, if they can.
Fuck them. I wish you God.

Where I come from, that is one hell of an elegy.

Peter Porter, from/of the Guardian, stated that "Murray's poetry is unlike anything else in the world of modern writing."  It certainly makes for a grand and compelling selected poems.

Poetry tends to be a regional beast, it often doesn't cross boarders or oceans.  I'm pretty sure Les Murray amazes wherever they speak English.

ABOUT THE AUTHOR
Les Murray is the author of twelve books of poetry. His collection Subhuman Redneck Poems received the T. S. Eliot Prize, and in 1998 he was awarded the Gold Medal for Poetry presented by Queen Elizabeth II. He lives in New South Wales, Australia.

BLUBS
“Would somebody please, please give this guy his Nobel Prize? Les Murray is 75, a farmer, an Australian, an outspoken conservative Catholic, and one of the planet’s best poets writing in English . . . New Selected Poems is Murray’s first such career survey since 2000. It’s a bracing read; Murray always is. He’s a cultivated roughneck, cultivating awkwardness and brute English to create unsuspected, original loveliness . . . [Murray’s] poems leave you vertical and delighted. So much of this book leaves a smile of pleasure and gratitude for a poet this good. Get him that Nobel, someone.” —John Timpane, The Philadelphia Inquirer


“Murray’s New Selected Poems is an event, a desert island book from a continent mostly desert. The volume includes more of his furiously inventive early work and 113 pages of poetry drawn from the five collections published since Learning Human (1998), his previous selected collection. Here is ‘The Burning Truck,’ a poem that evokes war, innocents’ response to war, and the transformative power of the unpredictable. Murray writes, addressing this truck, ‘but set us free.’ Much of the thrust of Murray’s verse is found in this wish and in parsing whom ‘us’ refers to and the nature of the freedom they wish for. Murray, acutely sensitive to how language reflects class and distorts values, wields it as a great leveler; because his poetry liberates us. His forms never draw attention to themselves, and, at his best, Murray is a seer, his versification effortless, breathing. Among dozens of peerless descriptions, Murray sees a foal at the moment of birth ‘drop in the grass / like little loose bagpipes.’ Other exceptional poems include ‘An Absolutely Ordinary Rainbow,’ ‘The Mitchells,’ ‘Equanimity,’ and ‘Machine Portraits with Pendant Spaceman.’” —Michael Autrey, Booklist (starred)