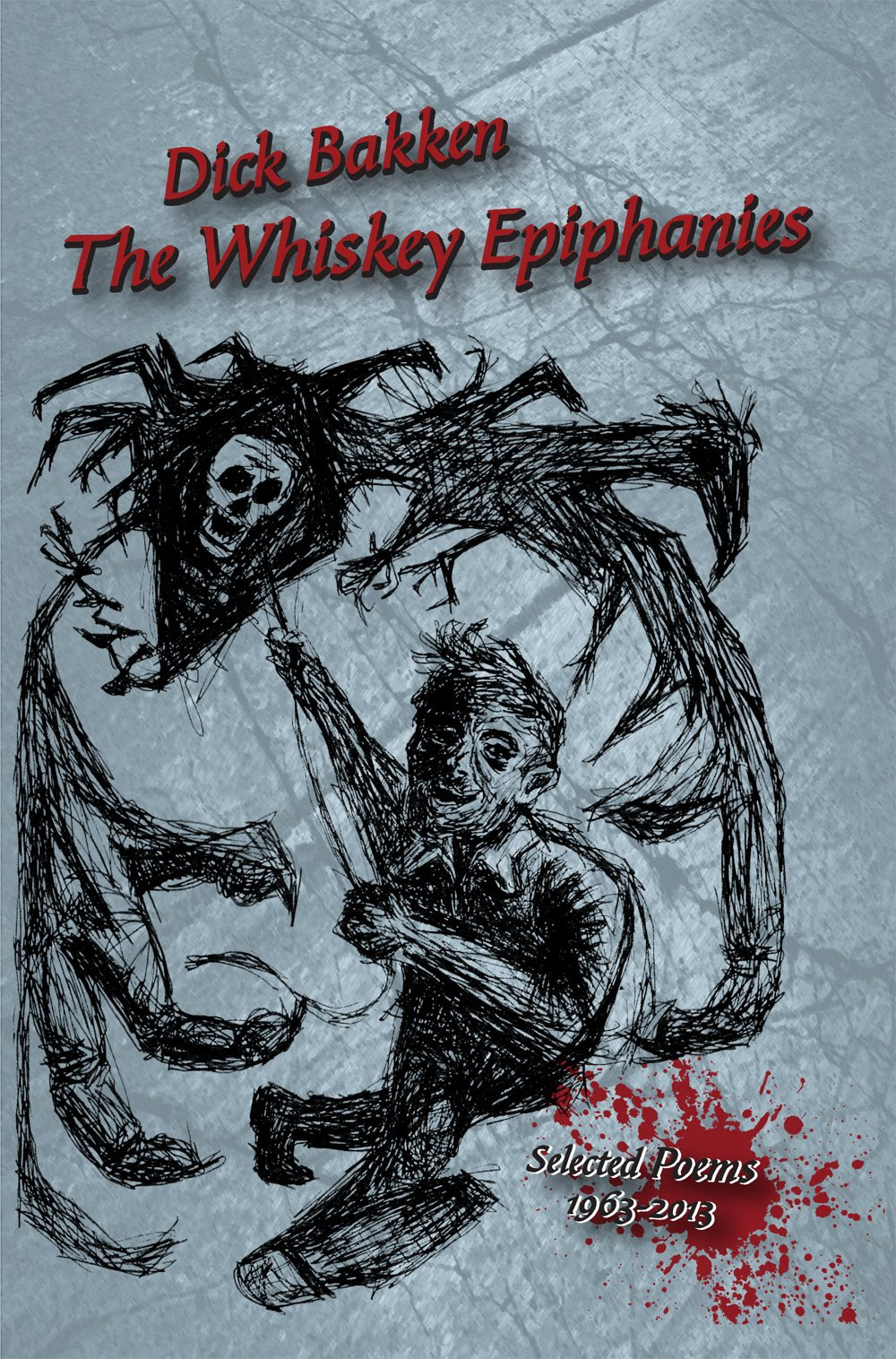 These are big messy, full of life, kick in the ass, scream at the moon, poems.

Let's start with "What Is Sleep", because here at Today's book of poetry "list" poems go over big.

What Is Sleep
transcribed from taped live improvisation

sleep
what is sleep

fog in a cat's mouth

popcorn on a lamb's back

a cloud in an elevator

Dick Bakken poems read as though Charles Bukowski and Woody Gutherie had a mad poet child who was never properly civilized.  Perhaps they left him in the woods and he was raised by articulate wolves.

Whatever the cause, his poems read like they were ripped from the typer with both blood and wine stains on the page.

Walked in the Spokane
foothills where Willie used to shack.
Someone had smeared a boulder
I hate you,
young lovers. Beware
lest you are damned
in this life and the next.
Heard an owl.
Back down on the avenue
met an old juiced wino who cried
homemade blues at me
all night.
Had my pen, jogged it all down.
Said way back in '38 he jammed
with Hank Williams.
Now no guitar, but jerked up
his sleeve and fingered the chords
on his wrist pretty
as could be.

Rollicking doesn't quite cover it.  Bakken barks, bites and his pagan pages boil.  This poetry is unique.

"The whole of what I am wants to wake people up to word/sound/lyricism -- and you just can't do that by putting them to sleep, i.e. making them drift comfortable with so-damn-common pre-American pretense to classiness."  - Dick Bakken

Sheriff Roy J. Lee
and fourteen deputies with dogs
surrounded a motel early this morning
to trap Willie Rogers, 43,
wanted for a crime spree last week here in Dillon.
They surprised
a man with the same name
inside frying green tomatoes and chilies, the wrong Willie
Rogers.

The spree started late Wednesday
in Pete Wallace's store when a Willie Rogers
in bib overalls
ordered Mexican beers, then a sandwich.
Wallace, as his custom, split a chicken breast,
left the neck on one side
and served the side with the neck.
The man became incensed, jerked a .22 pistol
out of his overalls
and shot Wallace, Mrs. Wallace, and Stella Mae Dunquist,
who was in the store trying on
a sun visor.

He ran away into a nearby gulch
as customers carried the victims to safety...
but under storm clouds
crept back
after sundown, broke in through a side window, stole a case
of beer and strings of sausages,
smashed cans of stove oil against the lunch counter
and lit it on fire.

With everyone scrambling
to save the store, this enraged Willie Rogers
carried flames
across to Wallace's home and hurled them in--and then their
old tomcat. As curtains flashed
Sheriff Lee, two deputies, and Jamie Wallace screaming
"Dynamite in the tool shed!" charged
to the smoking house
and in the darkness wrestled down a man
who turned out to be a bystander. Then all saw
through billows a
flamelit figure draped in sausages escape under black clouds
into the gulch with the case of beer,
yelling back an obscenity about
chicken necks.

Sheriff Lee radioed for bloodhounds
and state agents tore out headquarters, headlights
bouncing.
When they finally came sliding
into Wallace's yard, Roy Lee pulled open a door
and all those hounds
knocked him down howling after
the poor old tom. Cat and hounds and then deputies
chased through the smoldering embers of home and store
before leashes
could be snapped on. By then
falling midnight rain
had obliterated the scent of Willie Rogers.

After the two-day downpour
Sheriff Lee was told a man in overalls
had been spotted
leaving a barn near the gulch. Lee and his deputies
found beer cans, sausage skins, obscenities and
threats on the wall,
and three sticks of dynamite.
Bloodhounds dragging leashes yowled through the gulch
but each trail brought them back around to
the barn strewn with sausage skins.
In the meantime,
two squad cars and chicken coop were
blown up.

Then this morning Lee
and his deputies and dogs surrounded a motel
on the outskirts of Dillon and jumped
and clubbed an innocent Willie R. Rogers, a tire salesman
just frying up some breakfast.

Says Sheriff Roy J. Lee,
"The Willie
we want, he's somewhere in the gulch with dynamite
all right, and run out of sausages. I'm gonna round up
that nut and stick him
where he'll wish
he had nothing but a chicken neck to
chew on."

This is not my usual cup of tea, these sledgehammer poems require a seat belt.  With Dick Bakken's best poems you not only feel the charismatic energy of the poet -- you feel energized yourself.

These poems were forged on some hard anvil, put down on paper by a demonpoet in love with angels.

ABOUT THE AUTHOR
Arizona poet Dick Bakken is one of the most dynamic performers of poetry in America. His readings are intense and mesmerizing. His poetry has appeared in a variety of journals and has been recorded on radio and tape. He is a poet in the true oral tradition. At the same time, his poems hold up as well on the page as they do on the stage. But you need to gulp them with energy. These are not sweet, relaxing poems; not poems for bedtime or for lazing away an afternoon. As Bakken puts it, "The whole of what I am wants to wake people up to word/sound/lyricism and you just can't do that by putting them to sleep, i.e. making them drift comfortable with so-damn-common pre-American pretense to classiness.

BLURBS
"Among so many almost good enough poets, Dick Bakken's voice in unique. In The Whiskey Epiphanies he gives us fifty years of perfect harmony between the tough and tender, with plenty of surprises thrown in. This book is a long time coming, and well worth the wait."
--Margaret Randall, author of The Rhizome as a Field of Broken Bones

"Imagine a medieval summer reincarnated as the male lead in a 1940's Hollywood musical done in the vocal rhythms of 1950's beat poetry and you may have an inkling of the character of Dick Bakken's poetry performances. His work combines an innocent optimism with the frank style of street theater, a combination which seems not at all unlikely once you have seen his polished presentation."
--Barbara Drake, author of Driving One Hundred