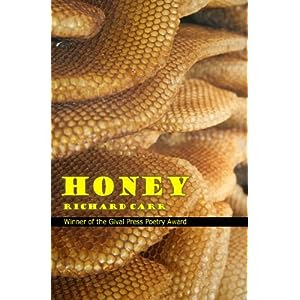 Richard Carr gives us a sequence of such silly joy that the reader spills with glee.  But there is enough seriousness in here to give you a heart attack, sweetly.

Intelligent and witty doesn't cut the mustard with Honey, but witty and intelligent are two of the first visceral responses to this tapestry.  This is some fine weaving.  Richard Carr is as sure footed as spider on its' own web.

No amount of washing can divert the ashtray
from its purpose.
The Bearded Lady, clean shaven in the off season,
offers me a cigarette,

and we share a thin, gravelly smoke.
I want to be like her.
She is a mirror. when she stirs her coffee,
the whole restaurant stirs.

These poems rollick with frenzied imagination.  Richard Carr has limitless spark and endless horizon.
Each of these stunning short poems adds another colour to Carr's explosive palette.

Design in the gothic city
a matter of assemblage,
I wear a massive clothing of stone monuments
and scaffolding.

The street a chaotic plaid of asphalt repairs,
I dent the pavement
where the work is still fresh,
hot.

The soles of my feet blacken my apartment--
walls, ceiling, all of it.

I usually require more of a narrative thread but found these tireless ditties endlessly fascinating.  It's like they came out of the barrel of a machine gun, each bullet as faultless as the other.

Carr would, I expect, be a marvelous dinner guest -- his imagination rolls out like a big sun that is constantly rising.

I gather to my cheekbones
crabappled blossoms drenched in a cold drizzle.
I lick violets, kneeling obscenely,
and draw yellow dandelion heads into my mouth.

I want to taste what the bee tastes,
nectar and pollen, but more, her chemical imprint,
footprints on the petals,
to learn where she has been, what orchards and nurseries.

gardens, graves --
and if she ever blushes.

A blushing bee, footprints on petals.  I loved these.

Everyone here at Today's book of poetry chose three different poems for today's blog -- but I chose the three you read here.  It could just as easily been any three poems picked at random from this electric book.

Dazzling stuff, sweet like honey, and a little sticky.

ABOUT THE AUTHOR
Richard Carr grew up in Blue Earth, Minnesota, and lives in Minneapolis. A former systems analyst, web designer, and tavern manager, he has taught writing and literature at several universities and community colleges. His other poetry collections are Ace (The Word Works, winner of the Washington Prize), Honey (Gival Press, winner of the Gival Press Poetry Award), and Mister Martini (University of North Texas Press, Winner of the Vassar Miller Prize). His chapbooks include Butterfly andNothingness (Mudlark) and Letters from North Prospect(Frank Cat Press, winner of the Frank Cat Press Poetry Chapbook Competition).

BLURBS
"Poet Richard Carr weaves together lovely and unlikely connections in his Gival Press Poetry Award winner, Honey (978-1-928589-45-7). Wrinkled plants, a goldfish and the poet drink water while outside, 'The clouds rain gasoline.' A Bearded Lady stirs coffee in a restaurant, birds listen to our voices on a telephone wire, and 'somewhere a dying child / wears a wig of [his] donated hair.' Lyrical, laced with longing, these 100 short poems create a world where 'The best stars slide across the sky in retrograde.'"
ForeWord Magazine, July 2009

"Honey is a tour de force. Comprised of 100 electrifying microsonnets, Richard Carr’s invention recalls Berryman’s Dreamsongs, for brilliance and wit, but is more readable. Open to any page: language and image startle and delight, like 'Einstein’s blown-fuse hairdo.' The whole sequence creates a narrative that becomes, like the Hapax Legomenon, a form that occurs only once in a literature."
—Barbara Louise Ungar, author of the award-winning collection The Origin of the Milky Way and final judge of the 2007 Gival Press Poetry Award

"This sequence of compact poems is musically subtle, visually surprising, and, at times, deeply moving. More than this, though, Honey is an ambitious, intricately unified book, part brilliant lyrical meditation and part surreal Bildungsroman. In it, Richard Carr creates a character whose search for truth and self (accompanied by the Bearded Lady, the Poet, the Boy, and the Hapax) is delightful and ambiguous. Honey is a poetry collection unlike any you’re likely to encounter. It is a wonderful, breathtaking achievement.

—Kevin Prufer, editor of Pleiades: A Journal of New Writing