Dorianne Laux has it right.  Ever actually been punched so hard in the stomach that all of the air in your body simply leaves?

It's like an instantaneous vacuum that leaves you on your knees sucking air.  At first you don't even realize it hurts.

It's only when you gasp, your throat in some raspy almost silent prayer.

Well, sit down on the floor so you'll have less far to fall.

God was a beautiful man
who was deeply in love with me.

He said, I know you're only seven,
but you have an old soul.
He knew everything about me. He knew
what the backs of my knees smelled like.

I imagined all my past bodies cut out
and standing up in a row behind me
as he'd tug my T-shirt over my head.

Smoke Of Her Body goes to some harrowingly dark places.  I'll go you one further -- unless you've seen a certain type of evil, a particular shade of darkness and malice -- you may not recognize anything here.

These poems are the sound that might have come out of the silent maw of Edvard Munch's "The Scream".

I exclaimed, quite loudly, as frequent readers of Today's book of poetry may remember, after reading each of the first several pieces in Levin's Smoke Of Her Body.  I swore loudly, multiple times.

I swear for two reasons, the first is when poems are so bad I'm annoyed at their ability to have found a publisher.  The second reason is the exact opposite, when the poems are so good that I'm instantly transfixed.

Later, when I wanted to know about Hell--
if I would end up there--
she'd nod her chin for me to lie back down,
lift the tail of the sheet and lower it
so air rolled in waves beneath
and the cotton landed
cool on my knees, then pull
the quilt over me, place the end
in my fingers balled up beneath my chin,
and say, We're there already.

Well, these are that -- instantly game changing, welding me into place, so to speak.

But now a third reason to swear -- along with excellence, Stephanie Levin has introduced fear as a criteria.  I was mortified and exhilarated as to where she would go next.

Not a roller-coaster thrill but definitely an amusement park, perhaps a fun-house, filled with monsters.

Second Anniversary of His Death

In the linen aisle of Target, I mouth the words
to Barry White in Muzak overhead,
and there's my brother in this movement:
chin bobbing to the left, neck moving

snakelike to the beat.
I see him driving, seat pushed back
like a La-Z-Boy, eyes bloodshot,
nodding to the music just like this.

A saleswoman approaches; I have to leave here.
I won't cry in a store like this.
But they make those aisles long
so you're sidetracked as you try to leave,

and I find something for him:
pizza plates in the shape of an extra large slice,
with pigs in chef hats, pepperonis flying.
The perfect gift for my brother, and he's dead.

Put on your seat-belt, turn off your phone.  "This is" to quote the toughest dame out there, "going to be a bumpy ride". 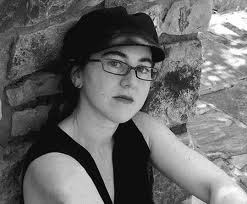 ABOUT THE AUTHOR
Stephanie Levin received her MFA in Poetry from the University of Virginia. Her work has appeared in Green Mountains Review, Folio, River Styx, Prairie Schooner, and Shenandoah. Her collection, Smoke of Her Body, was chosen by Dorianne Laux as winner of the 2011 Jacar Press Poetry Book Prize. The mother of two, she teaches reading at Carrboro High School.

BLURBS
"This one just has that punch in the stomach, 'wow, who the &#!% wrote this' factor going for it. I like how the poems are strong, yet understated, loud and quiet at the same time."
- Dorianne Laux, author of The Book of Men

Poems cited here are assumed to be under copyright by the poet and/or publisher.  They are shown here for publicity and review purposes.  For any other kind of re-use of these poems, please contact the listed publishers for permission.
Posted by Today's book of poetry at 3:57 AM