How do you make human those first moments of transition when a species is animal and then they become human?

Is it contained in that first deliberate painting on a cave wall?

Tom Holmes might have you feeling that.  The Cave posits those moments of the transformative human past and gives them scope, room to percolate in our active and overburdened minutiae.

I had no urge except to sleep
with her in the cave, but I felt
sympathy, I cared. I sensed
intelligence in a crevice. I saw

life. I saw a bison's back
in a crack, I saw
the whole world, the whole sky,
all of night. The night

with the bisons, the horses, and rhinos
before me, before my eyes -- I saw
a backdrop with all the beasts.

I saw blood on my finger.
The arc of a bison's back
appeared with one stroke.
The second urge arrived.

Tom Holmes is explaining who we are today by stepping into our giant footprints and deciphering what it is that makes us sentient, capable of thought and therefore choice.

These big question poems pose a challenge to the readers understanding of what it means to be human.

It is all in here, The Cave, the start of faith, the beginning of manufacturing, of commerce.  Holmes is outlining or at least providing a hypothesis for nothing less than the beginning of our conscious time on this planet.

Plato is just hanging out around the corner, Holmes has his own cave and in it all is explained in time.

Father, it is cold for spring,
snow lingers in shadows
below cliffs and trees,
the ground is not giving,
and the beasts smell you.

The fat and dried meats
dwindled away days ago
as did your final breath.
The fire is warming.
Forgive us our next meal.

Holmes assesses the future using the tools of the present.  He has discovered and/or decided to share time travel.  He is in every moment, Holmes somehow spirals through time.  The poems in The Cave
are our first revelations as we move away from the black glass monolith, bones in our hairy fists.

Today's book of poetry thought these poems were cut with a digital laser, precise as that.

A Brief Autobiography Of The First Artist

I was carving
the sharp end of a spear
when I sliced myself
and my blood spilled out.

It was smooth and thick
and salty.
I tried to rub it off,
it spread evenly and thin.

More pulsed out
in rhythm with my heart.
I clutched my chest.
The blood continued its pulse.

I smeared my arm
and then my thigh.
I slapped a rock.
The blood held its place.

I found a red hand
on the rock. My red hand
detached and peaceful
like a greeting or foreboding.

My blood stopped.
I sliced myself again.
I made more hands
and flung red drops from my fingertips.

There was so much red
before it all went black. 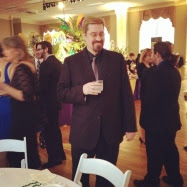 ABOUT THE AUTHOR
Tom Holmes is the editor of Redactions: Poetry, Poetics, & Prose and the author of seven collections of poetry, most recently The Cave, which won The Bitter Oleander Press Library of Poetry Book Award for 2013 and will be released in 2014. He has been nominated for the Pushcart Prize seven times and his work has appeared a number of times on Verse Daily. His writings about wine, poetry book reviews, and poetry can be found at his blog, The Line Break: http://thelinebreak.wordpress.com/.

Hand art on Paleolithic cave walls is the artery, but observations like cut gemstones are woven into Tom Holmes' exciting tapestry of The Cave with its hunger for mystery to balance you along the edge: "When the wall opens, / I am lightning in the antelope's antlers / and the stripe along its jaw." These poems wrestle with the concept of time. They want to capture time, yet realize that time is elusive. So, they attempt to understand time through concrete experience, which poses its own dilemma. Even The Needle, a vehicle which hopes to stitch the fabric designed to apprehend time, is ephemeral: "Let me tell you about the needle. / It is and it is not. It points / to what will be, and what it isnt..." Undeterred, the poet continues his quest. Enjoy this exciting journey through the primordial future.
--Alan Britt, judge for the 2013 Bitter Oleander Press Library of Poetry Book Award.

A deep and selfless imagination anchors The Cave. Tom Holmes gives himself over completely to his vision and his project is nothing less than inhabiting the spirit and the flesh of our collective ancestors. The speakers here, in the daily specifics of early life on earth, retell the beginnings of our consciousness as it rises from fire and rocks to images illuminated on the cave walls and in the night sky. Each poem is a distillation of the individual efforts of art that result in the common bonds of our humanity. From “blood on his finger” and “burnt wood and ash” to “where the wind took form” we retrace our physical and spiritual past in song and paint. The voices in these poems are absolutely credible, and Holmes’ writing is “a song it carries from a star.”
– Christpoher Buckley, author of Back Room at the Philosopher's Club

A writer looks at the famous Paleolithic cave paintings in France, and then he becomes an ancestor at art’s birth, birthing himself as a writer at the same time. Tom Holmes “set down [his] bowl of burning animal fat / to illuminate this hollow the world” in poems that embrace what it means to be a fledgling human and nods toward Platonic allegory in poems that delight and sometimes sear. In “An Origin of the Other” the sacred and the earthy conjoin in manifesting this human world, what we have been, what we have become and are becoming still. An ambitious and strange book of intelligence and empathy.
– Laura McCullough, author of Rigger Death & Hoist Another

Today's book of poetry cut and pasted two of those blurbs from the excellent poetry site Redactions. Which you can see here:  http://www.redactions.com/our-books.asp

Poems cited here are assumed to be under copyright by the poet and/or publisher.  They are shown here for publicity and review purposes.  For any other kind of re-use of these poems, please contact the listed publishers for permission.
Posted by Today's book of poetry at 10:40 AM